Ridding the Cayman Islands of Lionfish, One Dive at a Time 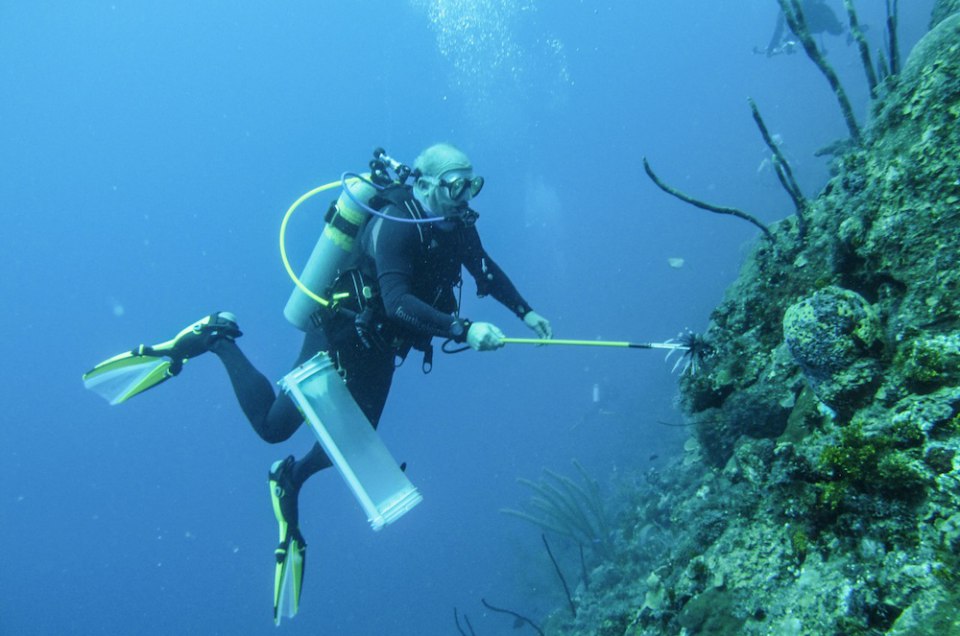 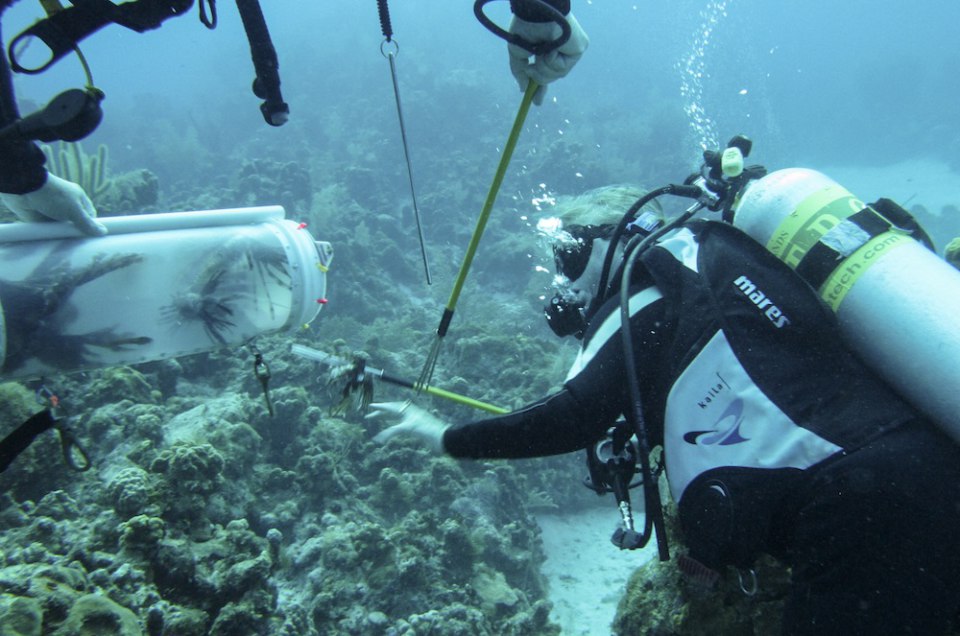 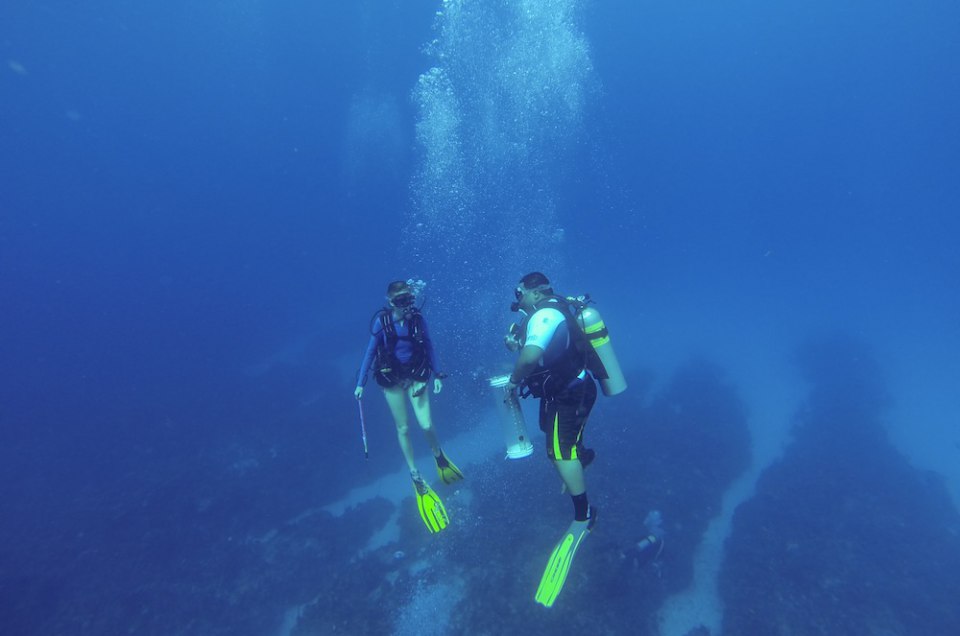 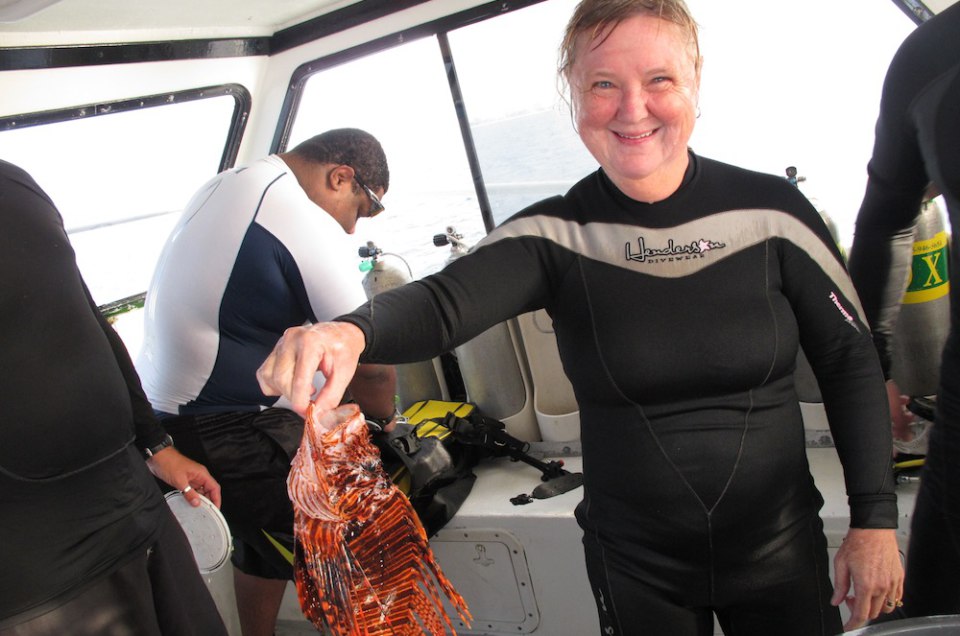 For non-divers, it may sound like a sadistic undertaking, going diving for the sole purpose of spearing lionfish to remove them from the sea. But for those in the know, it’s a crucial form of conservation in order to save the Cayman Islands’ fish population.

The brightly-colored, garish lionfish is native to the Indo-Pacific region where it has a number of known predators. However, no fish will touch it in the Caribbean for fear of its deadly venom.

How the Non-Native Species Got Where They Are

There are two types of species prevalent in the water: the devil firefish and the red lionfish. The first North American devil sighting happened north of New York in 1985; and from there, the fish traveled down the Atlantic via the Gulf Stream, being spotted as far south along the coastline as the middle of South America.

A few years later in 1992, Hurricane Andrew accidentally released the red lionfish from a beachside aquarium in South Florida, and they began to multiply like crazy. The first Grand Cayman sighting was in 2009, and in 2010, many local entities decided to start a culling initiative.

Throwing Off the Natural Balance

Lionfish are voracious predators that gorge on other species, and thus need to be controlled. They’re a disruption to the natural ecosystem and unfortunately, nature is incapable of keeping the population in check—considering they grow up to six inches a year, spawn in pairs and release 30,000 eggs per spawn (that’s more than two million annually!). They feed on a wide variety of fish and crustaceans and can devour prey up to half their body length.

These days, many operators such as Divetech at Cobalt Coast resort offer lionfish culling courses that include a classroom briefing and a demonstration of spearing and removing them from the sea. With 18 venomous spines, lionfish are a hazard to marine life and humans alike, so following the proper protocol is vital for your safety.

Divers learn to assess the location and move slowly toward the prey so as not to make it feel threatened. Once the target has been pinpointed, the diver must note any structures behind the fish should the attempt go sour and then, finally, aim for its head.

The first dip was a deep wall dive where we bottomed out around 100 feet. Since lionfish inhabit depths from one to 500 feet, they can be hiding anywhere that recreational divers might go. They’re also capable of inversion and are often found resting upside down beneath a shelf or outcropping, making the steep wall a perfect first place to look.

Knowing this, our group of 14—a mix of dive masters, dive shop owners and those of us who simply have open water or advanced certifications—dispersed beneath the surface in pairs, each with our own spear and bucket. It wasn’t five minutes before we had our first catch.

The spear can be difficult to wield underwater, particularly because you have to get within inches of a lionfish in order to guarantee you’ll be able to pin it in place. Lionfish are quick creatures that can dart sideways just as you think you’ve trapped them; they’re also tough as nails and require a few swift stabs before rendered lifeless. Once they’ve been captured and are ready to be removed, it’s a careful process to trap them without accidentally brushing up against one of those venomous spines – which is both exhilarating and terrifying.

We had a good bit of luck, removing a handful of lionfish from the water on our first dive. Our second dip was a shallow coral reef where our instructor said we weren’t likely to find many lingering. Imagine his surprise when we returned to the boat with more than a dozen in tow.

One interesting thing we witnessed was large snapper families circling around stealthy lionfishes’ hiding spots to help point them out to divers. While they won’t go in for the kill themselves, the snappers will gobble up the dead lionfish right off the spear—something we witnessed firsthand when one particularly aggressive snapper swooped down for lunch. It was a real-live National Geographic moment before we even had time to blink. Now, if only those greedy snappers would learn to do the dirty work themselves!

Tired yet proud of our contribution to the conservation effort, we returned to shore to call the Department of Environment (DoE) to report our catches and their measurements before turning them over to the kitchen to cook and clean. Surprisingly decadent, lionfish can take on many different forms as sustenance—grilled, pan-roasted, fried or ceviche—and you’ll see them on many menus around the Cayman Islands. Plus, you’ll leave satisfied knowing you helped preserve a delicate ecosystem. Just call it the justice league of the sea.

Note: Lionfish are extremely venomous, and divers should never attempt to catch them without proper training first.

Live Like It’s the Weekend and Getaway to Maine