Swimming with Turtles in Barbados

Swimming with Turtles in Barbados, photo by TarikB on Flickr.com 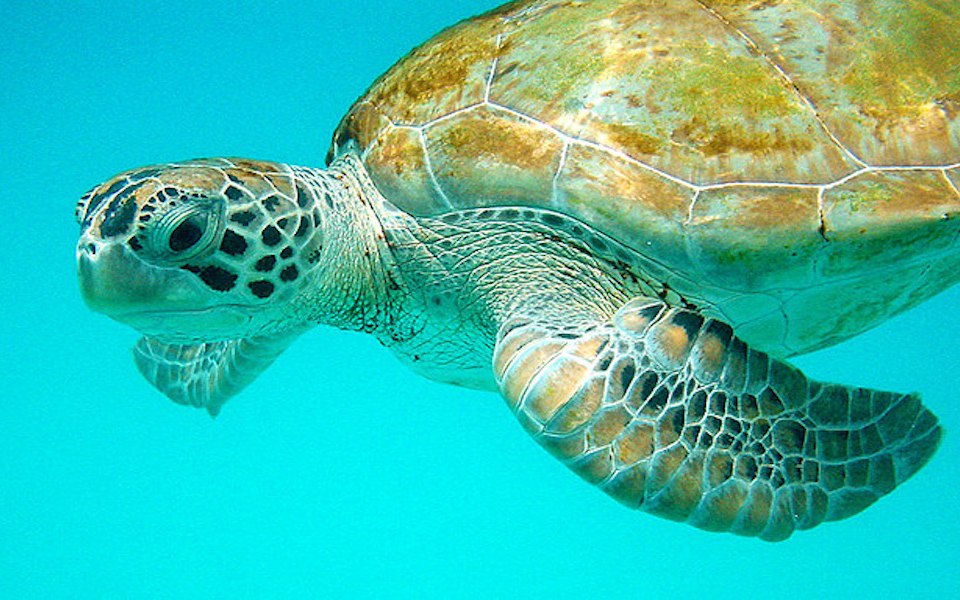 Swimming with Turtles in Barbados, photo by TarikB on Flickr.com 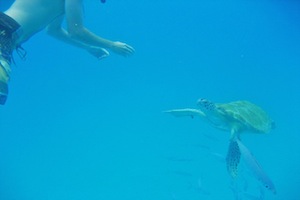 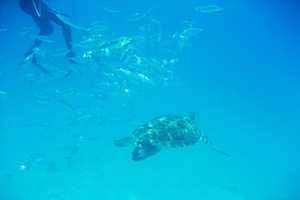 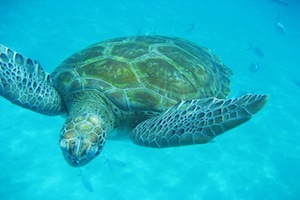 “Be careful”, says Louis as he passes me half a sprat from his plastic bag. “The turtles are quite aggressive. They can bite your finger off. Check me out first”.

We both put our masks on and snorkel on. We are swimming off Lone Star Beach, on the west coast of Barbados where the seas are calm and the beaches busy. Around us, a bale of green sea turtles swim at various angles to our bodies. Sometimes they get so close to us that we have to push them gently away. I watch carefully as Louis starts feeding them. He holds the fish about three feet from the turtle’s head. Once the turtle starts making a beeline for the morsel, he lets it go when the animal is only about a foot away. That’s enough; one opening of the mouth and the sprat is gone.

We surface again. “You have to make sure they’ve seen it. Sea turtles suffer from cataracts, just like us, and they become worse as they get older. Which is why you may lose your finger if you let them come too close.”

The three-legged turtle rises up. I dangle my sprat close to its head and draw the animal to the surface near me. I see it swimming slowly but purposefully towards me. A few seconds before it reaches my fingers I let the sprat go. I see the turtle swallow the sprat in one and swim away immediately. Louis gives me the thumbs-up.

Although it has become rather common to swim with dolphins, there aren’t many places in the world where you can swim with sea turtles. In Barbados, monitored populations of green and hawksbill turtles live close enough to the island’s Lone Star Beach and have become accustomed to humans through the regular feedings by the crews of cruising catamarans. In fact, swimming with turtles is one of the top attractions of the island.

And everyone loves it. I loved it. It’s not very often that a city greenhorn like me can interact with an animal in the wild, let alone at sea. It’s even rarer to have even a transient encounter with a species as endangered as the green turtle which amplifies the significance of our short interplay. In short: I fed them, I swam with them and, sure as hell, I don’t want to see them disappear.

How to Go Swimming With Turtles

Because of the dangers involved, many sailing companies do not allow passengers to feed the turtles directly. You will simply swim around, while crew members dive along and feed them. I traveled with Silver Moon Cruises, who cater to a maximum of twelve guests. They offer a five-hour morning excursion that combines swimming & snorkeling with the turtle experience. Buffet lunch and use of snorkeling equipment are included. Price is US$115.00 per adult & US$85.00 per child between 3 and 12 years old.

10 secrets to an amazing Hawaiian vacation