From Here to Infinity in St Lucia 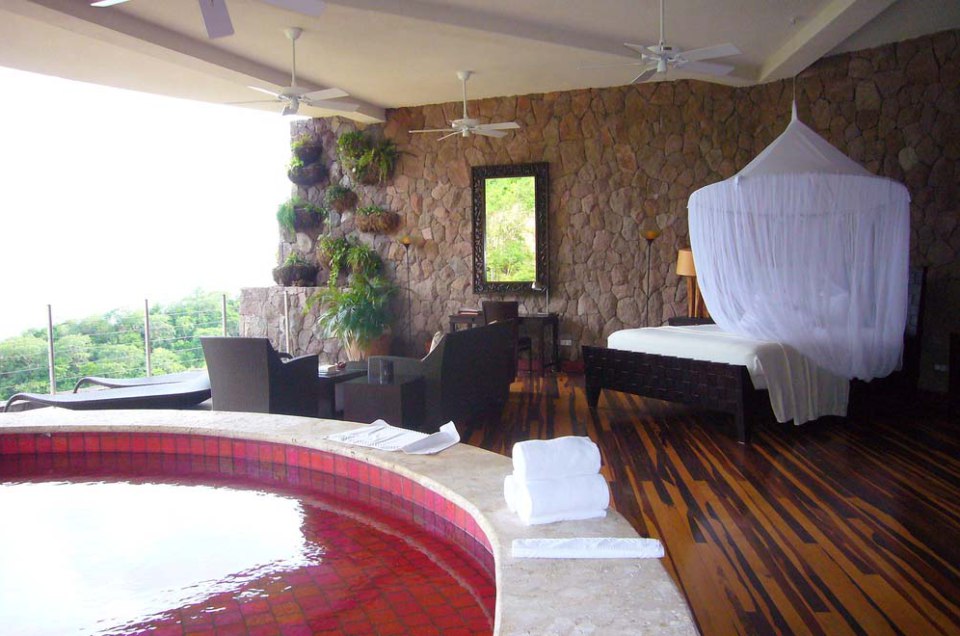 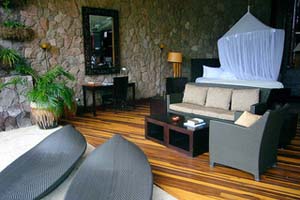 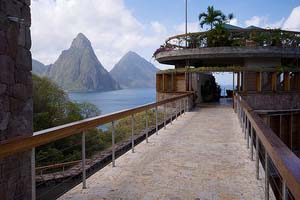 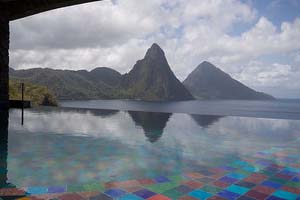 The road to Nirvana is not easy. Neither is the road to Jade Mountain. Both are rutted, difficult, fraught with obstacles, and the nagging sense one might not quite make it.

But the results are infinitely rewarding, and if you reach the resort-within-a-resort at Anse Chastenet, after the rough road that corkscrews steeply from Soufriere, a town on St. Lucia’s southwest coast, the views are infinite as well.

You will discover that your suite is missing its fourth wall, exposing such a jaw-dropping panorama of the Pitons – two extinct volcanoes resembling twin cones of green velvet – that you’ll be convinced the word “spectacular” has, until now, been silly hype.

In theater and fiction, the “fourth wall” refers to the invisible barrier between spectators or readers and the work of art itself. Breaking that fourth wall signifies dissolving that barrier. It’s a perfect analogy.

Here, the non-existent fourth wall in all 24 suites makes you feel like you’re melting into the incredibly lush nature and turquoise Caribbean Sea around you, in an almost spiritual way. For the first time, you realize a window can be a ridiculous impediment.

An unforgettable sight on St. Lucia, the Pitons are featured on the same UNESCO World Heritage list of precious treasures as India’s Taj Mahal. At Jade Mountain, the peaks are so inescapable they greet you every day like old friends. I’m tempted to compare views: is morning best, when sea and sky are in vivid primary colors, and fluffy white clouds fill the sky?

Or late afternoon, when shadows cast on the mountain flanks grow darker? How about when sunset starts and pink and lavender pastels tinge the sky? Or after sunset, when the peaks’ silhouettes are thrown into sharp, dramatic relief?

In my private infinity pool – 450 square feet, bigger than many apartments in New York, my  hometown – whose luminescent emerald-green glass tiles fade into pearly pink, purple, blue and yellow as sunlight hits them, I pretend to be an early explorer who fears my ship might drop off the edge because the world is flat. Later, I lie on the half-moon of coral stone edging my pool, admiring the Pitons perfectly reflected in its serene surface.

You reach your suite by walking a “bridge to infinity,” as the resort literature calls it: a long, private street of coral stone.

“You’ve left the beaten path – you’re crossing over the hill into this other world,” says David Knox of Lightstreams Inc., who custom-designed the glass pool tiles, a different color in each suite, such as maroon, rose or aqua.

He describes the pools as “Persian carpets of light and color. It is all as mystical as I feel St. Lucia is. It all sounds terribly over-the-top – until you see it.”

Instead of finding a chocolate on my pillow each evening, I find a poem – perhaps a paean to nature, or a love poem by Pablo Neruda. There’s no telephone, TV, music player or – God forbid – Internet in my suite to distract me. Multiple ceiling fans cool my room, instead of air conditioning. (For those who must stay connected to the outside world, Internet access can be found near the hotel’s reception desk.)

For music, there’s a nocturnal symphony performed by an orchestra of tree frogs. Birds replace them at dawn. If the sounds of tropical fauna attain crescendo levels, well, that’s why you are given earplugs on arrival.

If the urge to socialize with fellow humans strikes – don’t count on it – you will find a huge communal infinity pool in rainbow-colored tiles at the Jade Mountain Club, the open-air restaurant with to-die-for Pitons and Caribbean views on all sides. The Celestial Terrace, one level above, offers a 360-degree of the view from your suite.

A shuttle can take you to Anse Chastanet’s private beach, where there is excellent snorkeling off a reef just a few feet from shore. Or you can scuba dive, go kayaking, take a sunset cruise, or bike or tour the ruins of an 18th-century sugarcane plantation on the grounds.

Since 1974, Anse Chastanet has been top-ranked on every list of Caribbean resorts for its extraordinary rooms with staggering views; its bathrooms where trees grow through the roof; its open-air showers, and its ambience of romance and adventure.

“If Anse Chastanet doesn’t put you in the mood for love, then call the doctor to check for a heartbeat,” a scribe once wrote in Caribbean Travel & Life.

But at Jade Mountain, Nick Troubetzkoy, Anse Chastanet’s owner/architect, a Canadian of Russian descent, chose to push the envelope even further, boldly envisioning a missing wall and infinity pool in every suite, each bigger than the biggest rooms at Anse Chastanet, down the hill.

“As he went higher, the walls kept dropping,” jokes Karolin Troubetzkoy, Nick’s Bavarian-born wife and executive in charge of operations.

Jade Mountain may not be for everyone. But then neither is Nirvana.