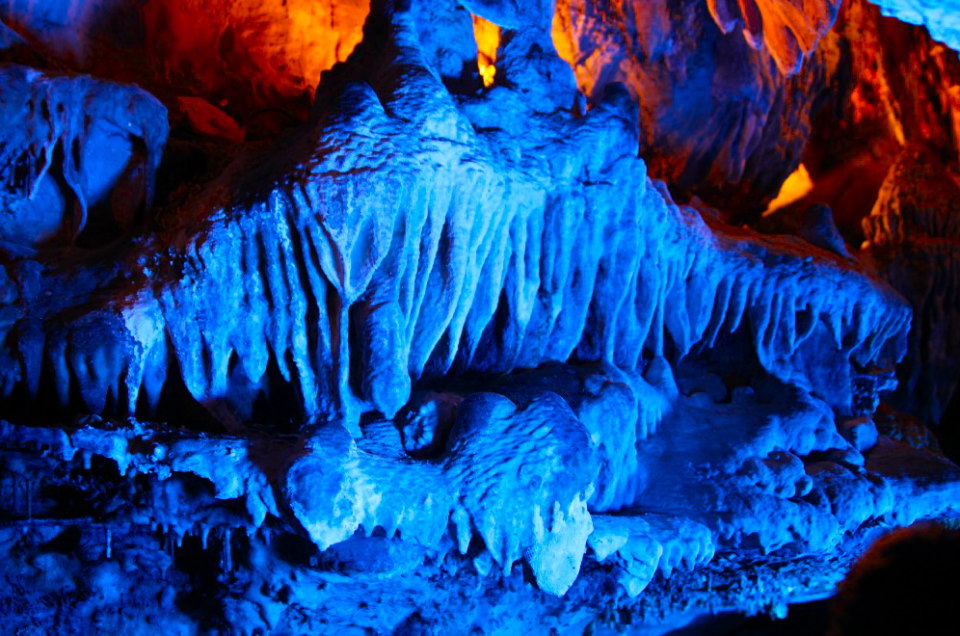 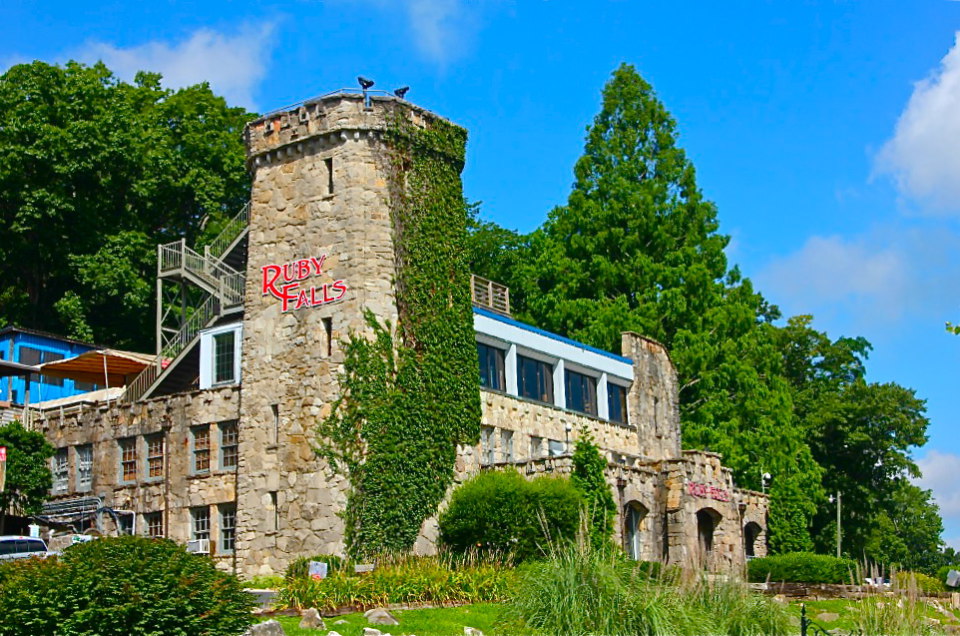 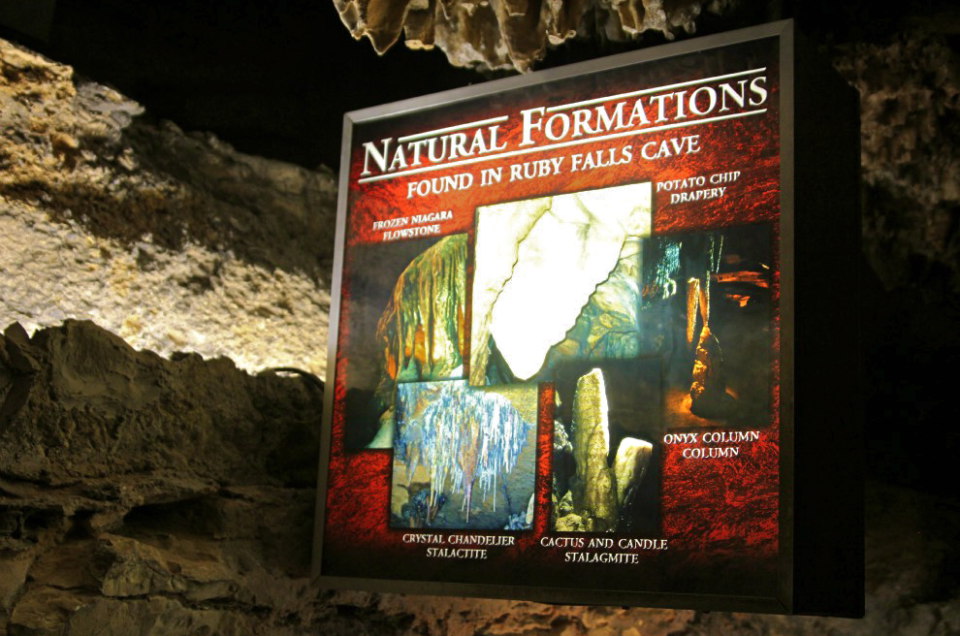 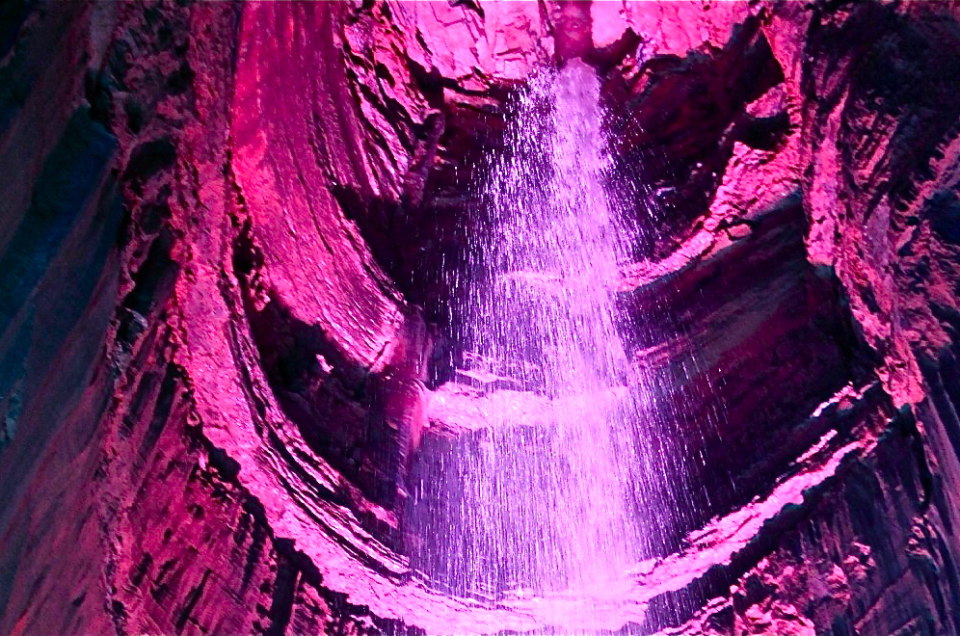 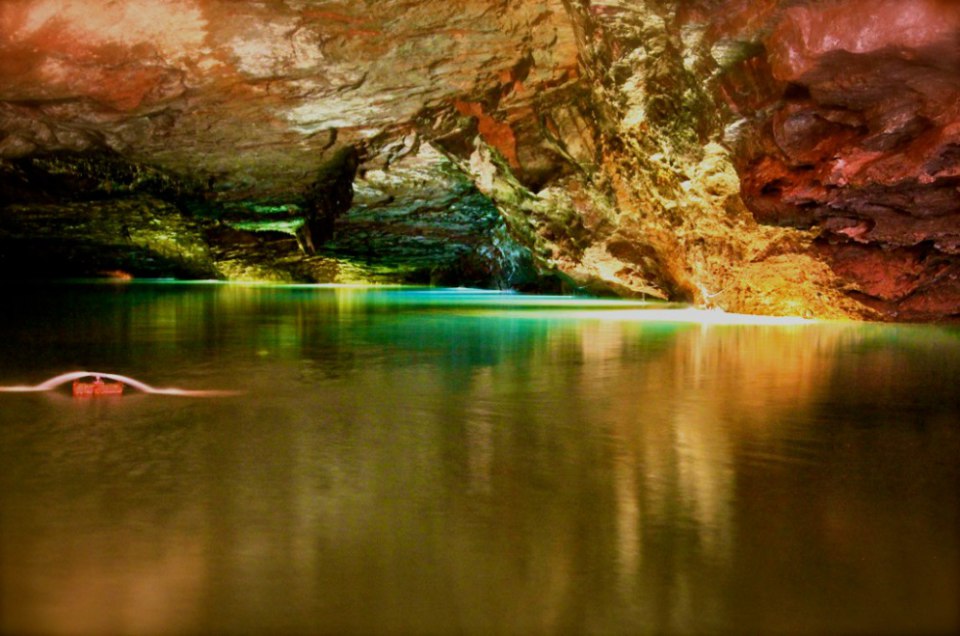 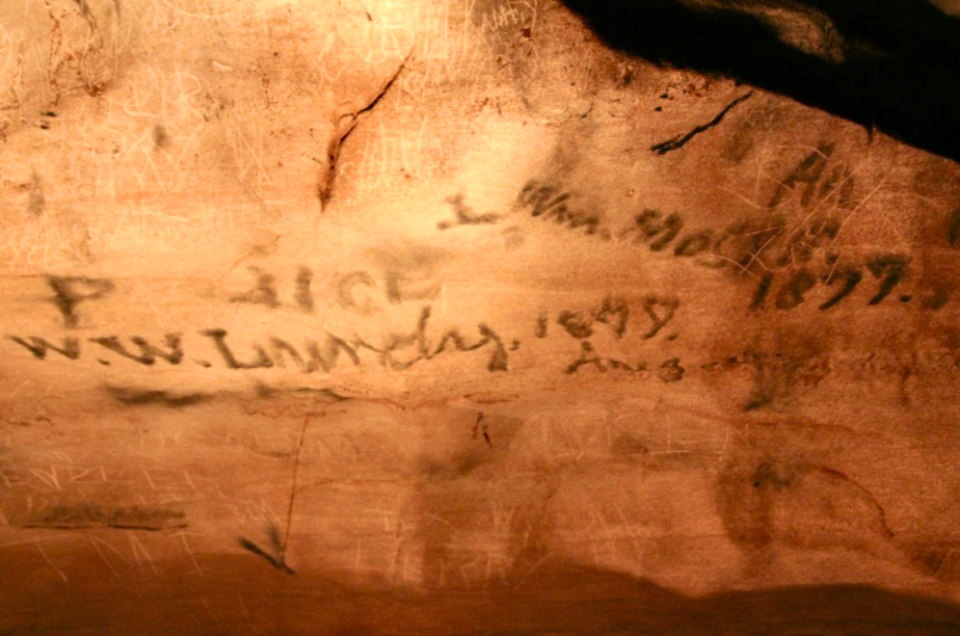 Lost Sea during The Civil War by Bret Love 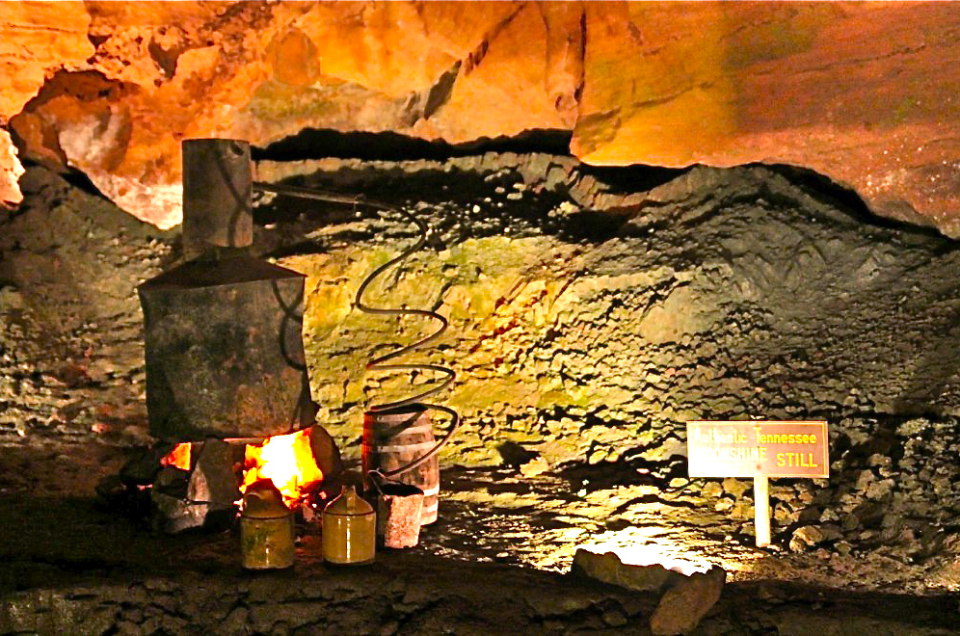 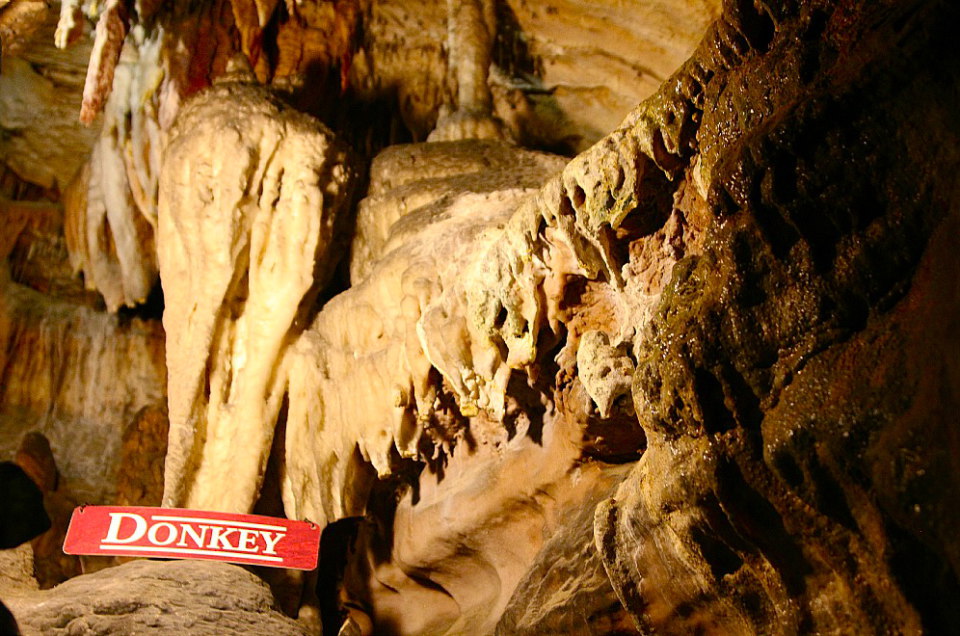 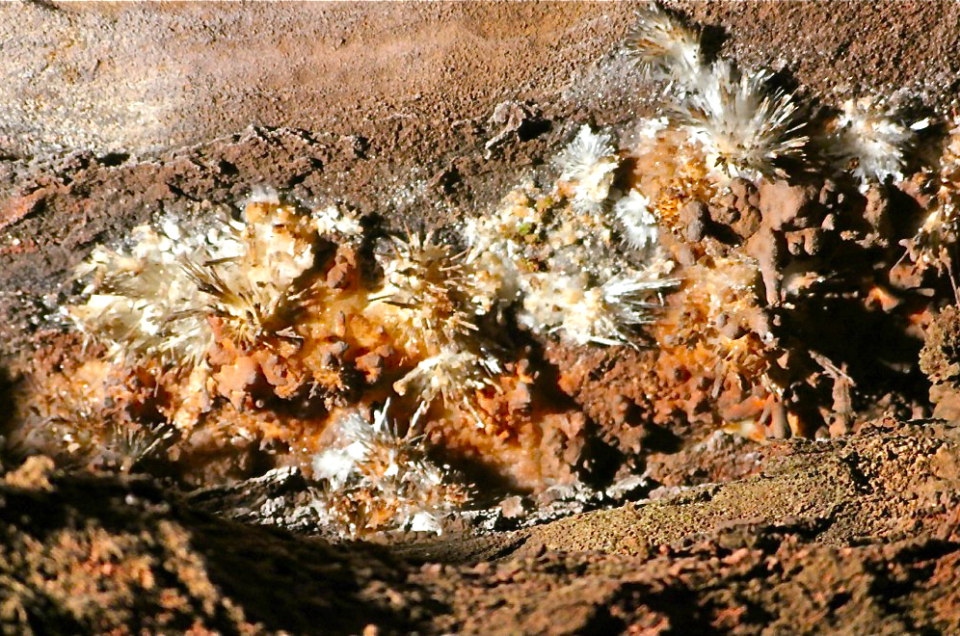 We can be happy underground

Caves have held a deep fascination for me ever since I was a young boy. There’s something primitive and primal about them that seems to offer a unique mixture of mystery and adventure.

But, despite growing up in Atlanta (less than 90 minutes south of Chattanooga), I had no idea until recently that east Tennessee boasts two of the most fascinating cave systems in all of North America.

The history of Ruby Falls can be traced back more than 200 million years to the Paleozoic era, when eastern Tennessee was under a shallow sea, the sediment of which gradually formed limestone rock. When tectonic plates shifted and formed Lookout Mountain, acidic groundwater made its way into subterranean streams and ate away at the limestone, widening passages in a process known as “chemical weathering.”

Over the centuries, the Lookout Mountain Cave proved historically significant. Prehistoric bones dating back to the last Ice Age were found there. President Andrew Jackson’s signature was discovered in one of its passageways. In the 1860s, cave owner Robert Cravens was contracted by the Tennessee military to mine saltpeter (a.k.a. potassium nitrate, a key ingredient in gunpowder and explosives) for the Confederate army there. But in 1905 the cave’s natural entrance was closed due to construction of a railway tunnel through the mountain.

Ruby Falls Cave, on the other hand, was inaccessible until the 1920s, when chemist/cave enthusiast Leo Lambert purchased the land above Lookout Mountain Cave in hopes of installing an elevator and turning it into a tourist attraction. When his company began drilling down in 1928, they discovered a tiny passageway two feet high and four feet wide. After 17 hours of exploration, Lambert found Ruby Falls Cave and its waterfall, which he named after his beloved wife.

You can learn much of this history from an informative exhibit while waiting in line for the elevator that takes you 1,120 feet down into the cave, with one guide typically leading around 20 people. They stagger tours every 15-20 minutes but a word of warning for claustrophobic types: Sometimes you’re sharing narrow passageways between rocks, giving tour groups coming back from the falls (jokingly known as “Survivors”) right of way.

Fortunately, stopping gives the guide a chance to tell you about some of the cave’s remarkable rock formations, which developed over thousands of years. The Ruby Falls Cave boasts an incredible variety of formations, which all have colorful, descriptive names such as “Angel Wings,” “Tobacco Leaves,” “Cactus & Candle,” and “Crystal Chandelier.” One of the cave’s most impressive features, a wide column known “The Leaning Tower,” is the oldest formation, dating back 3-5 million years. But each of these unique geological wonders is awe-inspiring in its own way.

After walking about half a mile over the course of 35 minutes, you hear two sounds that alert you to the fact that the falls is near: Rushing water, and a dynamic surge of dreamy New Age music.

Once you enter the main chamber, the 145-foot falls erupt in a Technicolor burst of pink, purple and blue hues, with the shimmering water making it look a little like an underground fireworks display.

You get a few minutes to snap some souvenir photos, and then the lights go out to make way for the next tour group.

Afterwards, you might want to leave time to visit the Lookout Mountain Tower, which affords excellent scenic views of Chattanooga, not to mention the solar panels that power the cave’s eco-friendly lighting. But we left fairly quickly, driving an hour north to the second-largest underground lake in the world.

Located in the foothills of the Great Smoky Mountains in Sweetwater, Tennessee, there’s an extensive cave system originally known as Craighead Caverns.

Formerly owned by Native American Chief Craighead, the caverns were used by the Cherokee as a meeting place, and later mined by Confederate soldiers for saltpeter. The remains of a massive Pleistocene jaguar and an elk fawn were found there in 1939, and you can still see graffiti left during the Civil War era on the cave walls today. Craighead Caverns was added to the National Park Service list of National Natural Landmarks in 1974.

The underground lake now known as “The Lost Sea” was first discovered in 1905 by a 13-year-old local, Ben Sands. The teen stumbled upon a small opening in the cave (in which he played regularly, as boys are wont to do), and decided to crawl through. Once inside, he realized the chamber was so big he couldn’t see the other side from the light of his lantern. But when he threw balls of mud in all directions, he heard splashes and realized his discovery was kind of a big deal.

Unfortunately, when he got home his parents didn’t believe him. By the time he convinced his dad to check it out, the water levels had changed and he could no longer find the entrance. But when local explorers re-discovered the cave decades later, it was Sands who got the credit, and a beaming portrait of him visiting the attraction as an elderly man adorns the wall of The Lost Sea entrance today.

Ruby Falls Cave and Craighead Caverns couldn’t possibly be more different. Where the former is a bustling tourist attraction in a major city, the latter is a little off-the-beaten-path, set amongst pastoral rural farmland. Where Ruby Falls Cave is narrow and filled with intricate geological formations, Craighead Caverns is vast and expansive. And where the pacing at Ruby Falls runs like clockwork, Craighead feels more casual and leisurely, with an amiable approach characteristic of small town Americana.

After a brief introduction outlining the rules, your guide leads you across a narrow bridge to see one of the cave’s few examples of stalactite (which hang down from the ceiling) and stalagmite (which grow up from the floor) formations. They also point out one of the cave’s most distinctive features– anthodites, or “cave flowers.” These speleothems (cave formations) are composed of long, needle-like, feathery white crystals that look like miniature versions of Superman’s “Fortress of Solitude.”

As you head down deeper into the cave, the gently sloping, winding path takes you past an old moonshine still found in the cave, a wooden vat once used to cook saltpeter, a small waterfall, and a cache of metal bins containing food rations from the ‘60s. But of course the main attraction comes at the very bottom, at the end of your 20-25 minute hike.

At 800 feet long, 220 feet wide and over 70 feet deep in some places, The Lost Sea is second only to Namibia’s Dragon Breath Cave among the largest non-subglacial underground lakes in the world. The dim colored lighting gives the water an eerie, otherworldly glow, and everyone’s voices became hushed, almost reverent on sheer instinct.

The Lost Sea boat ride is guaranteed to be unlike anything you’ve ever seen. Green, yellow and red lights illuminate just enough of the water to draw your attention to the huge school of trout that live there, which were brought in as a tourist attraction many years ago and are fed by the guides regularly. Even after your eyes adjust to the relative darkness, you’ll strain to see the far reaches of the cave. There’s no music, only the subtle sound of an aerator to help the fish get more oxygen. But the overall effect is magical, and precisely what you want from a subterranean cave.

Due to the incline, the hike back up to the top was a challenge for some guests. But the guides take it slow and easy, stopping for rest several times along the way. After you exit through the gift shop, you can explore a village that includes an old-time blacksmith’s workshop, sweet shop, general store and more. Like the rest of the Lost Sea Adventure, it’s all very quirky and charming– a relatively unknown gem just waiting to be discovered.

Great location next to the Convention Center, with easy access to arty downtown Knoxville.

This story is Sponsored by TNVacation.com.