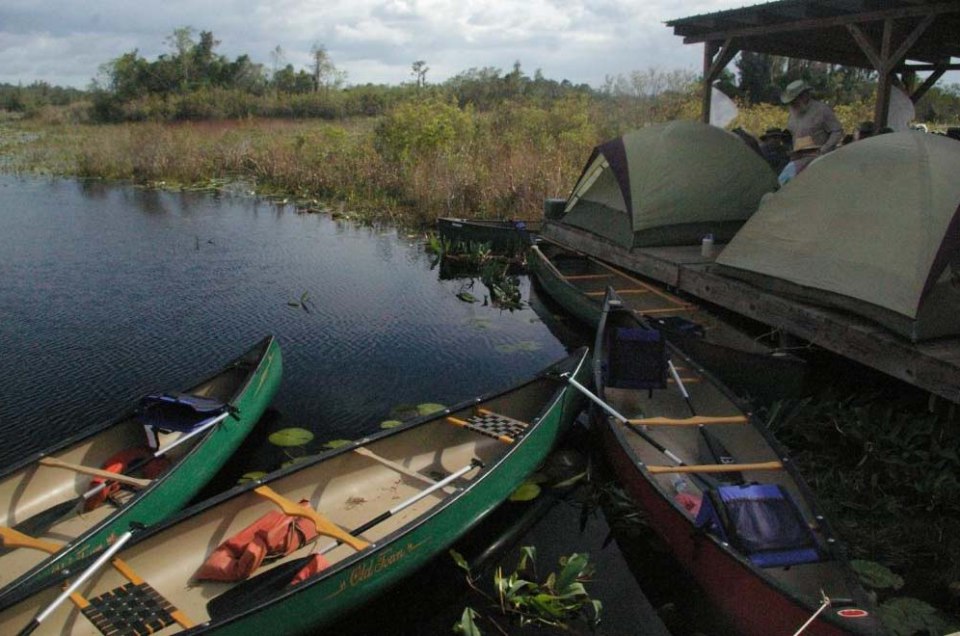 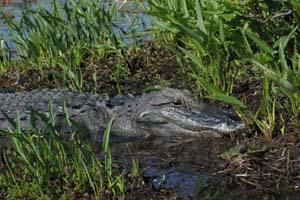 There were gators aplenty on this trip, photo by John Geary

Plenty of birdwatching to be done there too, photo by John Geary 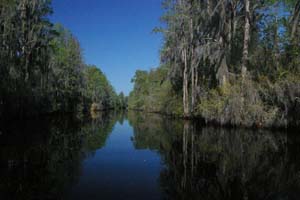 So serene to paddle through, photo by John Geary

With that noise, my head snapped around very quickly, hoping I might see a wild alligator up close.

There it was! Its head popped up only 20 metres away, but by the time I could get my camera ready to shoot, our canoe had drifted too far past.

“Don’t worry, you’ll get plenty of more opportunities to get some good shots,” said Chip Campbell, our guide, as we continued paddling.

“Will we get closer than that?” I asked.

“Well, one time, we did have a gator jump into the canoe, that was really interesting,” Campbell said “But that doesn’t happen often.”

Day One of a three-day paddling trip through the Okefenokee Swamp in southern Georgia, and already the alligator stories were starting.

Of course, if you don’t like the idea of sharing the water with North America’s largest reptiles, you might not enjoy paddling through “the swamp.” But if you do, it’s the place for you. It is part of a protected wetland area home to a variety of birds and wildlife, including its most famous denizens, alligators. It’s one of those destinations that lurks near the top of bucket lists for nature enthusiasts and paddlers, alike.

We saw more gators during lunch, pulled up to a picnic shelter along the bank. After eating, we continued paddling down a channel thickly forested with banks of cypress trees interspersed with pine, bay and blackgum trees.

During our leisurely paddle, I learned more about the swamp’s ecology. Gators were not always the top predator; black bears lived there, and depending on their relative sizes, they took turns preying on each others’ cubs. Apparently, bears are particularly fond of gator eggs, “if they can find some unguarded – or guarded by a mother not big enough to fight off the bear,” said Campbell.

His stories reminded me of a line from the movie “King Solomon’s Mines” where Allan Quartermain remarks about how in the jungle, everything is either being eaten or eating something else.

At that thought, a quick movement caught my eye – and I saw a first hand example of it. Down a side channel a water snake lunged at a frog – and in turn, was gobbled down by a small gator.

As the day wore on the channel gave way to a “prairie” – but not the kind you ride horses across. Throughout the reserve exist flat, wide open bodies of water called “prairies” that often require some steady paddling if you happen to hit a stiff headwind. We did, so it meant less talking and more paddling to get to that night’s campsite.

We camped on what is essentially a raised wooden platform right in the swamp, containing a cooking area, some tables, an outhouse and a place to pitch tents. While I’d paddled around gators in Florida, I’d never camped among them (some of them swim right under the platform), so it was a new experience. I was glad there were 20 of us – safety in numbers!

As the moon came up, our flashlights highlighted pairs of orange pinpoints along the marshy shores: alligator eyes. Thousands of frogs chirped, an occasional night bird called and even more occasionally, a gator bellowed.

The next morning, a hungry sandhill crane joined us for breakfast, fishing for its food around the platform while we sipped our coffee.

More prairie paddling awaited us – and many more alligators. During one encounter, our canoe got just a bit too close and the gator growled, so we made sure to paddle past at a safer distance.

“Growling’s not too bad,” said Campbell. “It’s when they roar and snap their jaws you need to worry a bit.”

I made a note to keep that in mind the next time a gator growled at me.

Eventually we got back into some narrow channels, spotting some green herons and other waterfowl on the way to our next campsite.

This night’s campsite was more traditional, on land – part of a portage, actually. While we didn’t see gators there, we did spot some deer crashing through the woods. That night, some owls serenaded us to sleep.

The next day brought more channel paddling through the swamp, past huge cypress trees, the scenery reminiscent of the Fellowship of the Ring seven paddling out of Lothlorien in Peter Jackson’s first Lord of the Rings movie. I’d much rather deal with alligators than orcs, though…

The last half hour we paddled a lake, then out through a channel to where a shuttle vehicle waited to take us back to our put-in on the other side of the park; we had crossed from the east to west boundary on our journey. As we approached the takeout, a gator along the bank grumbled at us, as if to say “good-bye – and don’t hurry back.”

For a first-time visitor to the Swamp, your best bet is to book a tour with Okenfenokee Adventures,

For more info about the national wildlife refuge, visit http://www.fws.gov/okefenokee/

The closest international airport is in Jacksonville, Florida, about an hour’s drive from Folkston, Georgia, the community closest to the eastern park entrance.