Swimming with Whale Sharks in Cancun

Up close with a whale shark in Cancun, photo by NothingToDeclare on Flickr.com 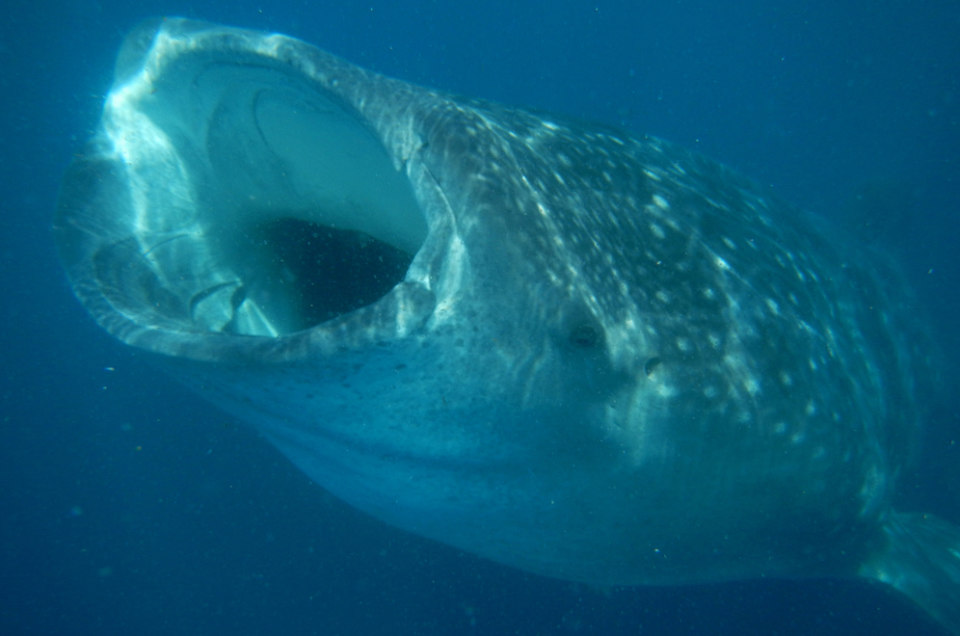 Up close with a whale shark in Cancun, photo by NothingToDeclare on Flickr.com 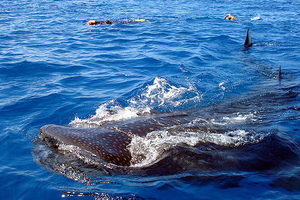 Whale shark breaking the surface of the water, photo by Dtraveller on Flickr.com 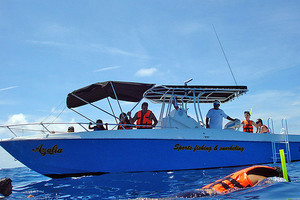 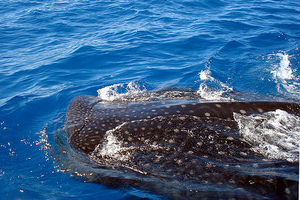 Whale shark up close, photo by Dtraveller on Flickr.com

There are people who believe that Jonah wasn’t swallowed by a whale, he was swallowed by a whale shark. As the biblical story goes, the titular figure in the Book of Jonah attempts to shirk a mission from God by sailing from Jaffa to Tarshish. Irked by Jonah’s ploy to skip town, God unleashes a mighty storm, which is quelled when Jonah casts himself into the sea, only to be swallowed by a “large fish,” in whose belly he lives for three days and three nights.

While my re-counting of the story is a simplified version, the Bible doesn’t actually specify what kind of fish it was – just that it was a big one. As I kid, I never had any reason to question the prevalent notion that it was a whale, but that was before I jumped into the water off the coast of Cancun, for a dip with hundreds of whale sharks. The sharks converge in these waters, just off the Yucatan Peninsula, every year in July and August, and the opportunity to snorkel with them in waters as warm as 85 degrees, is rare off-season draw for a resort city best known for spring break mayhem. It was the National Geographic that first posited that whale shark theory, and the first time I ever heard it was that morning from our guide on the boat ride from Cancun, from a dock next to the Dreams Hotel out past the Isla Mujeres to where the whale sharks were most likely to be found that day.

“Don’t worry, if he swallows you, he’ll spit you right out,” the guide immediately reassured the group after telling us the Jonah theory, and then he turned back to a GPS, which he and the boat driver were using to find the herd based on logs of recent sightings.

His tone suggested we shouldn’t take him too seriously, and thankfully I didn’t find out until after I got home that a photographer had actually been swallowed, and at a site not far from where we’d be swimming, about a month before (the shark did immediately spit him out). At that point, all I really knew about whale sharks was that they were huge and fed on plankton, and so the only thing that felt adventurous about the excursion was deciding skip the Dramamine on the early morning boat ride, despite a late night and several margaritas (I was fine).

When we spotted our first whale shark, an even hour out from Cancun, everyone on my boat whooped and hollered and some people waved shirts in the air from the excitement, and we all pointed and tried to catch them with our iPhones. They didn’t look that big, I thought, before putting on my snorkel and jumping off the boat.

We’d been advised to position ourselves right in the whale sharks’ oncoming path, which sounds crazy except that they swim much faster than we do and this was apparently the best way to get a prolonged look. And so when the first one emerged, a grey apparition against a literal sea of blue that gained definition as it neared, I got in front of it and watched it race towards me, its gaping mouth easily spanning the same width as both of my arms outstretched.

“Holy shit!” I spit out my snorkel and sputtered to no one in particular. For a few seconds there, it looked like it actually might swallow me, but it glided right past, finally revealing its full size. The shark took four full seconds to pass, which doesn’t sound like very long until you count it out … one-one-thousand, two-one-thousand … it’s actually a really long time. At recorded lengths of up to more than 40 feet (and quoted – but unconfirmed – lengths of nearly 60), whale sharks are certifiably huge, though I could only finally appreciate just how huge from my aquatic vantage point. Like the proverbial iceberg, you get a limited sense outside of the water. From the deck, the speckles that cover their skin, one of whale sharks’ most recognizable characteristics, looked as small as freckles. As the first one swam past, I realized that each of those dots was bigger than my entire hand, and its tail, much taller than my five feet nine inches. Under each dorsal fin was a handful of smaller angular fish – they looked tiny, in a relative sense, but it’s hard to tell how large they actually were – that look like rocket packs, fueling the sharks along. “Shit eaters,” the guide explained, when I didn’t understand the Spanish name.

One after another, the massive sharks revealed themselves, appearing through the salty water like ghosts and growing massive on the approach, those cavernous jaws never any less unnerving than they were the first time. I spent a breathless hour alternatively chasing them and swimming in their path, and it didn’t for a second get boring. By the time we climbed back into the boat, there were at least 20 small watercraft ringing the area, and dozens of colourful snorkels poking up over the water’s surface. Our guide estimated that there were 200, or even as many as 250 sharks, in the water with us, but as the first boat out that day, for a brief while, we’d had them all to ourselves.

As the boat pulled away the creatures grew smaller and smaller yet, until finally, they disappeared.