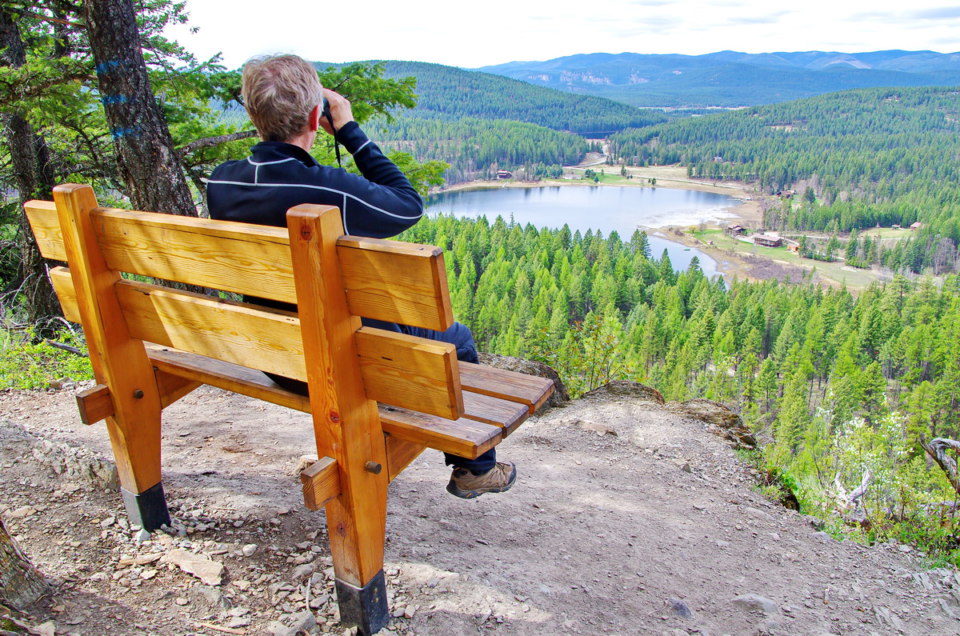 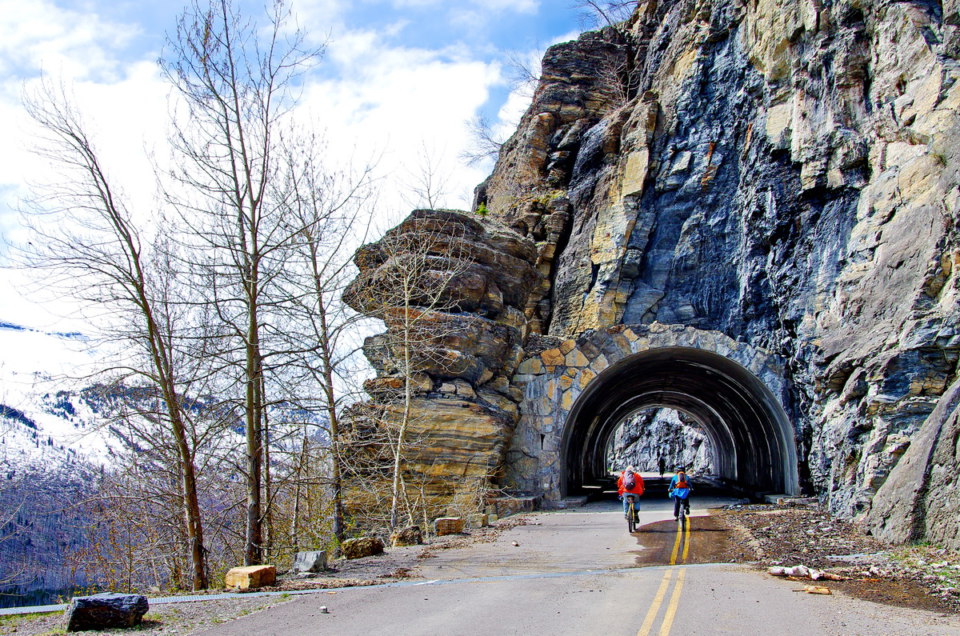 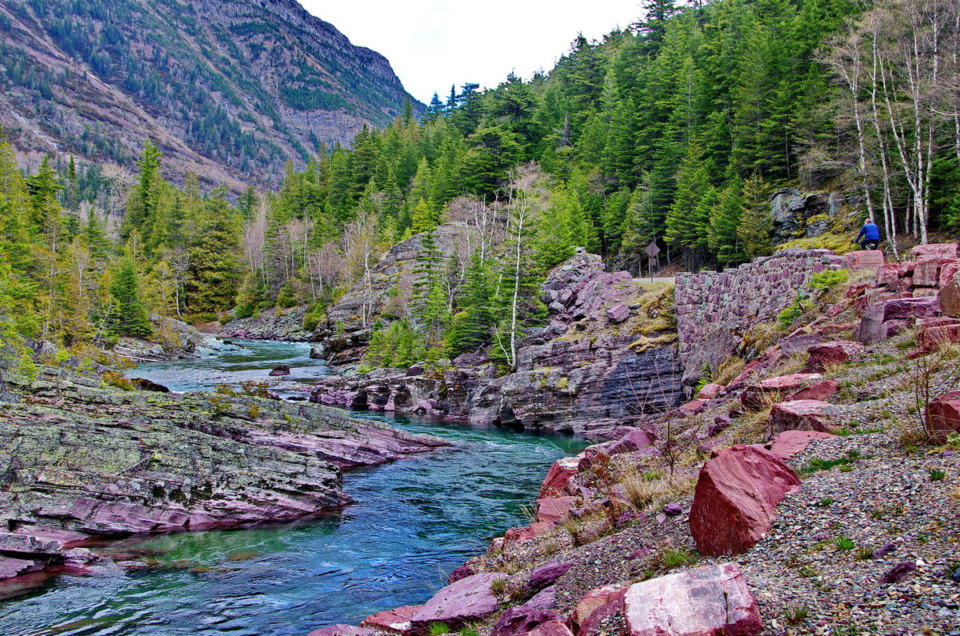 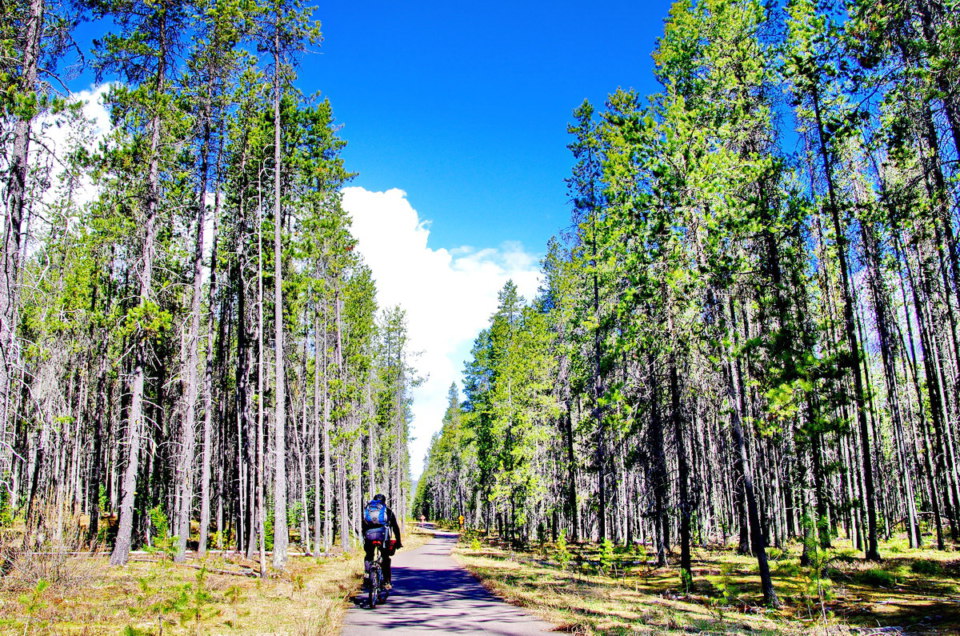 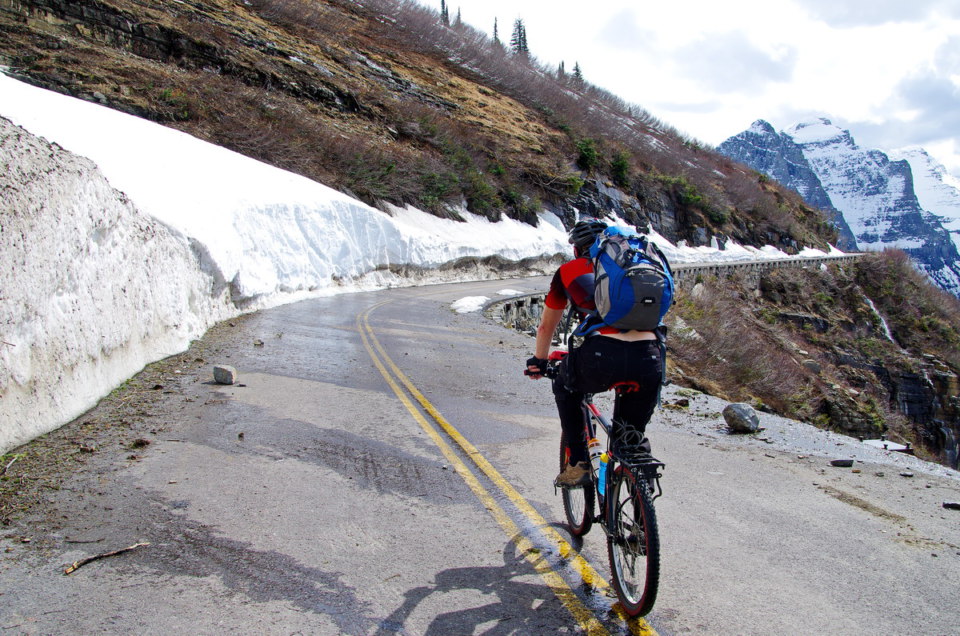 Whitefish, Montana is only a five-hour drive from Calgary, so I don’t have much in the way of excuses for not visiting. I rectified that last weekend with a two day trip – knowing that the weather would be good. We had two goals for the weekend; cycle as far as we could on the Going-to-the-Sun Road in nearby Glacier National Park and see what Whitefish had to offer the hiker or cyclist.

We chose the first day of our stay to cycle the Going-to-the-Sun Road. The 53 mile road, a National Historic Landmark and an engineering marvel, cuts through the heart of Glacier National Park. Although the park is open year-round, the road is only open on a seasonal basis. The west gate of the park is about a 45 minute drive from Whitefish. This year the road is scheduled to open to cars on June 15th at the earliest and it will be partially closed by September 20th. But between now and mid-June, hikers and cyclists have the luxury of riding (or walking) the road without any cars from the parking lot at Avalanche Creek onwards.

We had the weather in our favor – a good thing since much of the road is above treeline and in the mountains. But we really didn’t realize was what we were getting ourselves into. So we lingered over breakfast at Loula’s Café in Whitefish – a local favourite – and didn’t even show up to Glacier National Park until 11 am. On top of that we parked our car outside the park gates, figuring we could use some exercise.

We got that in spades!

From the park gates you can take a bike path to the Apgar Visitor Centre and then get back on the Going-to-the-Sun Road. It’s about 17 mostly flat miles from the park entrance to Avalanche Creek and most of it along Lake McDonald. It’s a scenic ride and it gets even better after the lake when a number of waterfalls come into view. Most people – really every other cyclist we saw – parked their car at Avalanche Creek and then proceeded to ride the Going-to-the-Sun Road. There’s a reason they do that as we found out.

At the gates you feel the freedom of the road. The ride is extremely popular so lots of people are out – as families with young kids, friends, singles and couples. Approximately 12 miles of road are open north of Avalanche Creek. That changes every week, depending on how far the plows have got. In years with big snowstorms, up to 80 feet of snow has been reported at Logan Pass so it typically takes a few months to clear it all. Along the way there is still debris and some rockfall to avoid; edges are airy in avalanche zones and with lots of snow up high, you won’t want to linger there anyway.

We climbed several thousand feet with the views really starting to pop once we got to the tunnel, before what is called the loop. From the loop you can make out where the snow hasn’t been cleared. It looks closer than it is. We turned around a mile short of the plowed section. It seemed prudent despite the fact we were so close. And in hindsight it was a good decision as we didn’t get back to our car until 6 PM. Granted we had lingered at lunch and stopped for all sorts of photography opportunities, but the reality is that it’s a tough ride, especially on mountain bikes with a pack. That’s our excuse!

Cycling the Going to the Sun Road ranks in the top 10 one day bike rides I’ve done. Don’t miss the opportunity to cycle it without cars. Once it’s open to vehicles, bicycles are only allowed on the road before 11 am and after 4 pm. You can check the road status on the park website.

The city of Whitefish is also fantastic for hiking and biking. Home to the Whitefish Trail, a multiuse trail system with numerous trailhead options, some conveniently close to town, the trails will eventually be combined to form one giant loop.

Close to town, the three mile loop from the Lion Mountain Trailhead is perfect for those wanting a quick workout. The reward is a beautiful view of Skyles Lake. There is the option to continue on the trail all the way to Woods Lake. As an out and back ride with loops you could easily ride over 40 miles. Out of towners should take note of the Whitefish Bike Retreat – for overnight accommodation just yards from the trail, and only 15 minutes from Whitefish itself.

In two days we were only able to scratch the surface of what is offered in the Whitefish area. Now that we know, we’d both like to make cycling the Going to the Sun Road an annual event and we’d certainly try more of the mountain bike trails.

10 Backpacking Destinations You Need to Experience in 2017

An Epic 48 Hours in Whitefish and Glacier National Park