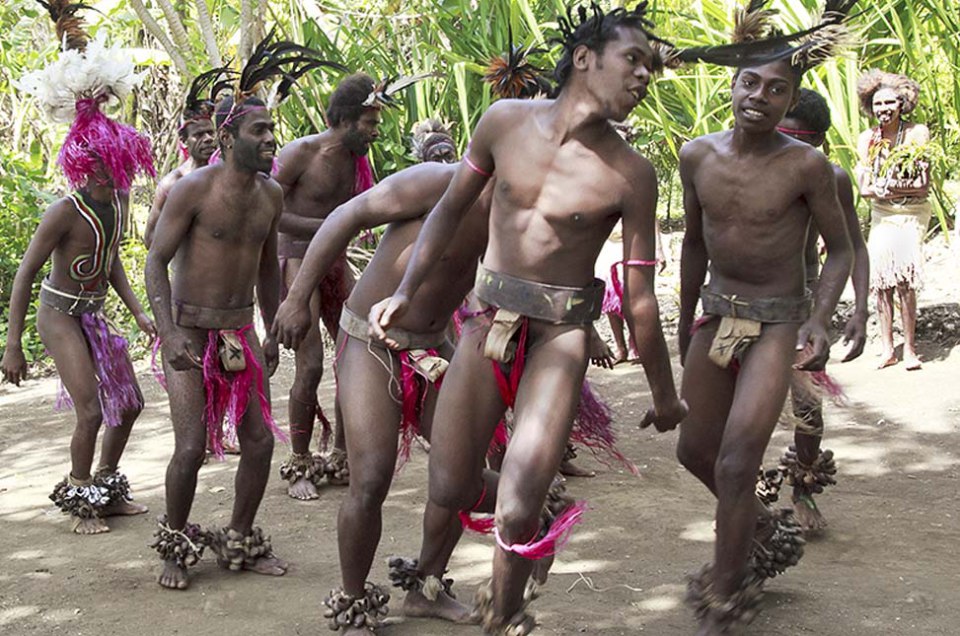 It’s an accepted concept in my corner of the universe: size matters. For as long as I can remember, I heard whispered stories of ballet dancers and rock stars stuffing their underwear, men undergoing penis-enlarging procedures and personal ads touting appendages the size of baseball bats.

I thought the same obsession with a man’s procreation parts was a universal truth, but in lush, tropical Vanuatu in the South Pacific, I learned two things: 1) The country has twice been named the happiest place on earth and 2) men are unconcerned about the size of their organs. I wondered if the two facts were linked. I imagine that if a man spends zero time worrying about how big he is, he clearly has more time to think about how happy he is. And women, too, can enjoy the agility of their partners rather than gossiping about peanuts and cruise missiles.

You may be wondering how I found out about the lack of penis preoccupation in Vanuatu, which was called New Hebrides before independence from English and French colonial rule in l980. Other folks go there for pristine beaches, diving the world-famous wreck of the SS President Coolidge, inching close to Mount Yasur (probably the world’s most approachable active volcano), jungle trekking, looking for the diminutive and legendary Ly Sep Sep people, or getting married in a really exotic location.

I was there to find out about the enduring, powerful culture of the 80 or so Vanuatu islands, and I sort of stumbled—not literally—upon my first penis sheath.

It was on the island of Tanna, in a “kastom” village. In the endearing pidgin English (called Bislama) that is the common tongue on Vanuatu (where more than 113 languages are spoken),  “kastom” derives from the word “custom” and refers to traditional dress, songs, dances and lifestyle practiced in a tribal village.

When I arrived in Yakel, a young boy played tam tams to alert the villagers, and my guide Tom appeared. A tall, strapping, handsome man, he carried a large bow and arrow in one hand and a cell phone in the other. The topless, barefoot women around him wore grass skirts and Tom, like the other village men, sported a bark belt from which was suspended a foliage container for his private part.

Totally un-self conscious, he led me into his village. The houses were constructed from wood and thatch, people waved hello, pigs roamed around freely and seemed well-fed and content, and Tom stopped to point out a low abode with a steep thatched roof that was built to sustain cyclone winds. I was fascinated by every detail of kastom village life, but my eyes were—I confess—riveted. How did a man go to the bathroom, I wondered. (He unwrapped.) Why weren’t the testicles and scrotum hidden? (Because only the eye of the penis is covered—from the time a boy is circumcised. This generally happens around age 4 to 6m depending upon when the family can afford the lavish expense of the ceremonial festivities, which include, but are not limited to, kava (a mild narcotic), manioc, pigs, yams, taro, and woven mats.

After my village tour, I asked the women if they had any handicrafts, and they laid them out on mats. I bought a necklace made from two pig tusks (pigs are very valuable in Vanuatu culture, and the crème du cochon are pigs with single or double curled tusks), and a stone axe head that had been used by Tom’s ancestors. I had never before appreciated the stone axe heads I saw in museum cases, but then Johnson, a ni-Vanuatu (the name for locals), chief from Futuna island, explained that it took an unfathomable amount of time to make an axe head using stone age technology. Imagine the task of rubbing stone against stone to create a tool. “We don’t know how long it took because the song is lost,” Johnson said. The song gave the axe-making men courage and stamina and connected them to the spiritual forces that would assist them. After such an explanation, I felt that the laboriously-fashioned stone axe head was one of my most treasured possessions.

When I finished my purchase, I looked up, and a group of village men had gathered to dance. Accompanied by a hand-held wooden tam-tam and singing, the scantily-clad men pounded the earth with such power and energy that I was sure their sheaths would pop off, but those little penis covers were secured by eons of kastom and experience.

On the island of Malekula, which is an ethnographer’s or cultural anthropologist’s dream, I was taken to the respective villages of the Big Nambas and the Small Nambas, which roughly translate as the big penis sheaths and the small penis sheaths.

I had a hard time imagining an American, Italian, French or Australian man being proud of declaring that he was a member of the small guys. Bon on Malekula, one declared one’s affiliation with the same pride of belonging that we might display when we say, “I come from San Francisco” or “I live in Paris.”Close observation revealed that the Small Nambas covered their parts with a leaf, and the Big Nambas hid the family jewel behind a more grassy plant.

The kastoms of the two villages soon became more engaging than the penis coverings. The companion of the earth-pounding dance of the men was the exuberant jumping of the women. The villagers, whose survival depends upon deep knowledge of the bush, generously demonstrated to this city babe how they grated and cooked manioc, wove mats, started a fire from rubbing wood against wood, and prepared lap lap for in-ground cooking. As everywhere in Vanuatu, both the Big and the Little Nambas lined up to shake the hand of a visitor.

Thee were distinct differences between the Big and Small Nambas customs. The women in the former sported dazzling, dramatic red headdresses, and the dancers of the latter included the spirit of the 30 nasty neighbors they had once clubbed, cooked and eaten.

By the end of the first day I was on Malekula, I could spot a little or Big Nambas a kilometer away. What they shared was openness, an excellent sense of humor, a welcoming attitude and total lack of self-consciousness about body parts. “Kastom clothes make more sense than regular clothes,” a small Nambas man told me. “I don’t have to worry about when I can wash my clothes if they get dirty. If I have any problem, I throw my sheath away and get a new one.”

Towards the end of my stay in Vanuatu, I was snorkeling on the island of Aore, at the Aore Island Resort. Anne, the owner, who originally hailed from Australia, cheerfully told me that the ni-Vanuatu men who work with her aren’t even aware there is a difference between the organs of men.  “They had been watching a film one night—I suppose it was a kind of porno film—and they were surprised to see a man with a very large penis,” Anne reported. “They asked me if it was real or fake. I told them it was probably real. They seemed puzzled that it was so big. To them, all men’s penises are the same size.”

It was the beginning of my love affair with Vanuatu.