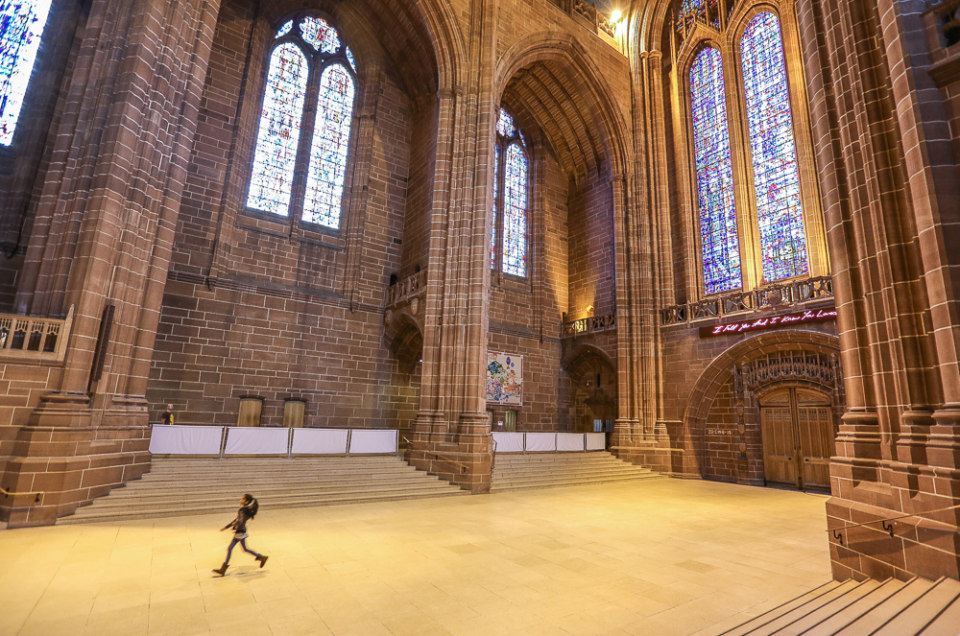 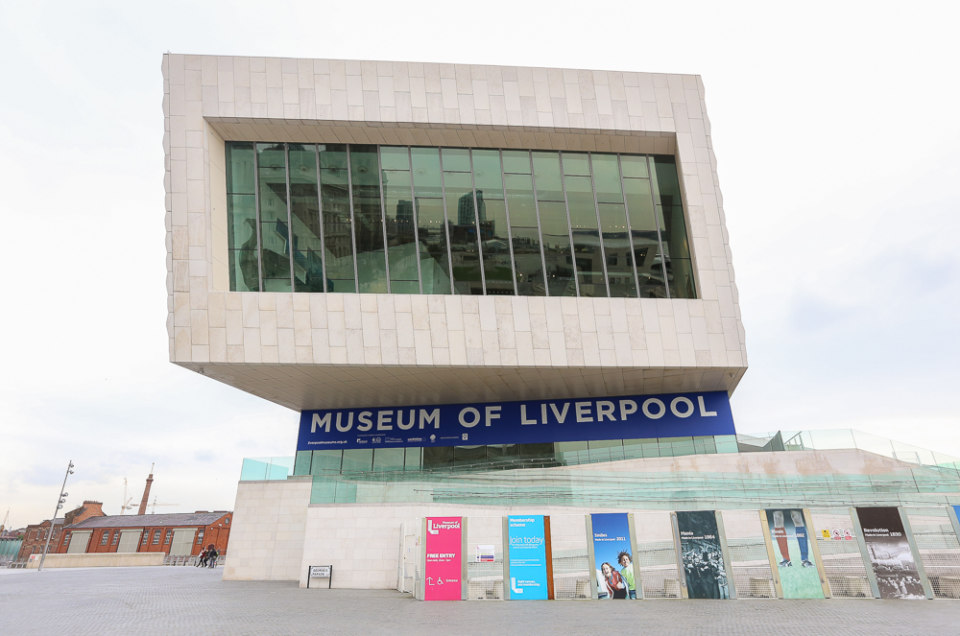 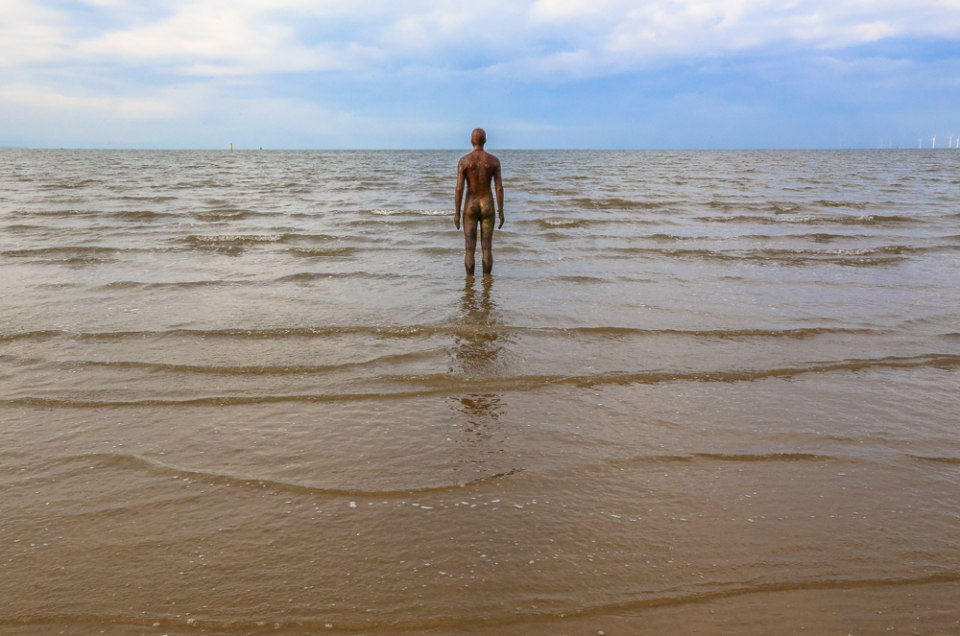 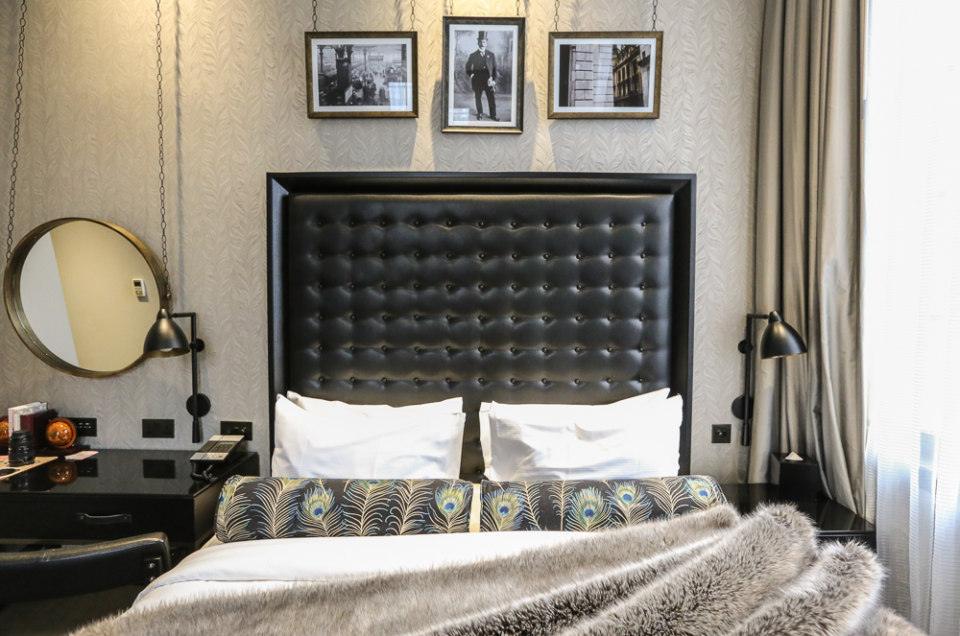 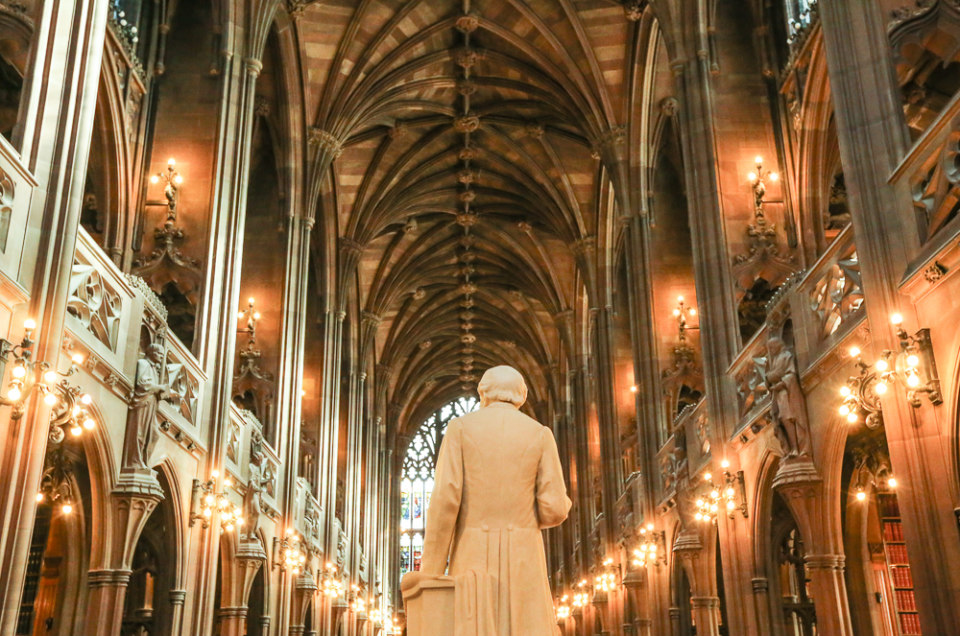 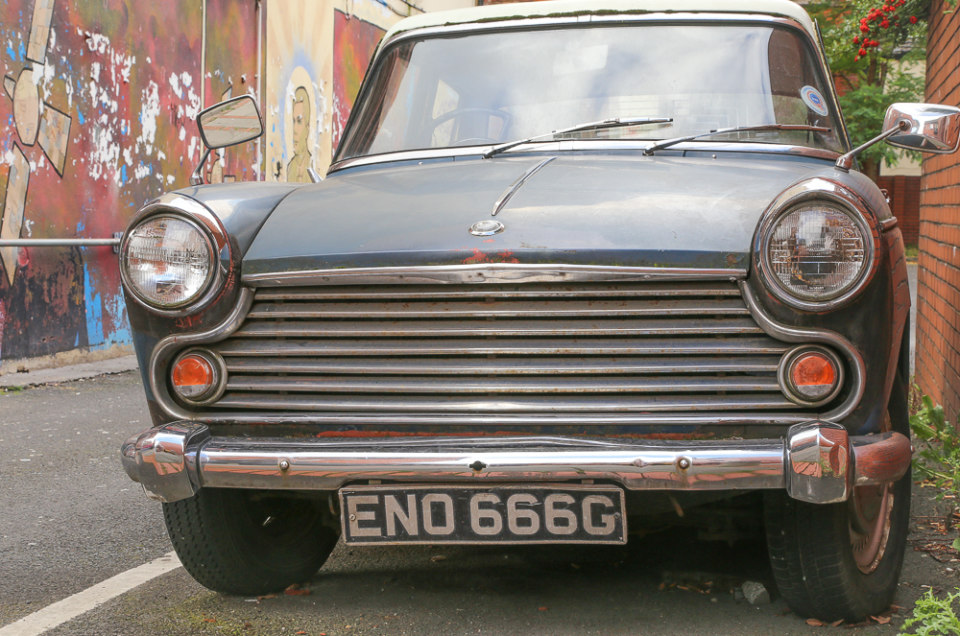 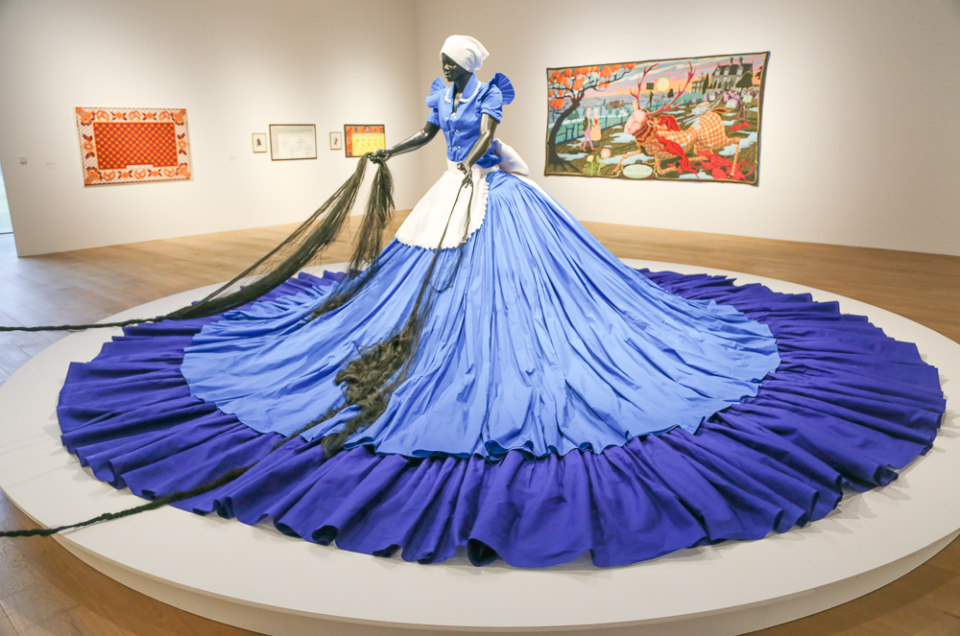 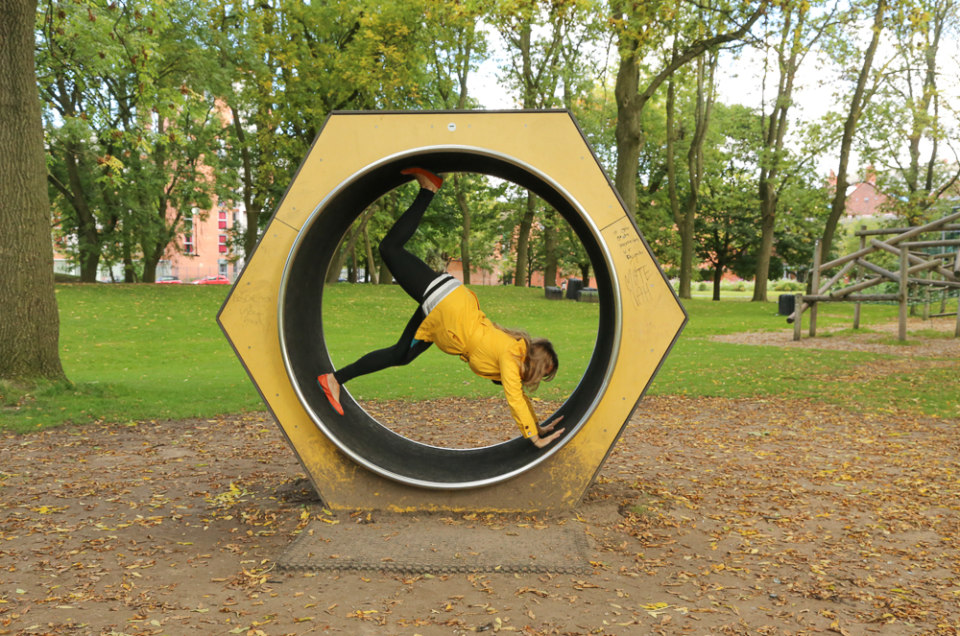 Liverpool and Manchester are two of England’s most underrated destinations, full of dichotomies: both former industrial hubs, the two cities also have flourishing cultural sides that shouldn’t be overlooked. And with just 45 minutes and an easy train ride connecting them, the pair of artistic meccas can easily be explored via a combination trip the next time you’re visiting Britain.

Here’s how to best divvy up such a getaway to score some amazing moments of your own.

I came to Liverpool and found the Beatles on my first night! Ok, maybe not the actual Beatles, but this quartet of performers did pretty impressive role playing as the Fab Four on the stage of the Royal Court Theatre in “Let It Be.”

Plan Your Own Manchester & Liverpool Trip

Arrive at Manchester airport. From the international terminal, it couldn’t be easier to grab your bags and go; the train station is connected to the airport, and trains leave directly from there to various cities around England. You can reach Liverpool within an hour of landing in Manchester if you time it right.

Check into the Titanic Hotel Liverpool. Once you arrive in the city center, hail a cab to the old Stanley Docks where the 153 rooms of Liverpool’s newest boutique hotel occupy a former rum warehouse. Each space is large and unique, providing a glimpse into Liverpool’s industrial past and a comfortable home base from which to see the city.

Spend the evening at the theater. Grab an early dinner at Titanic’s Stanley’s Bar & Grill, then settle into your seat for a show at the Royal Court Theatre, which hosts concerts and visiting performances of award-winning shows like Let It Be.

One is the loneliest number? Nah, that’s all a lie. I actually have always liked dining alone and what I like even better is that in #Liverpool they don’t bat an eye when I ask for a table for one. Last night, my dinner plans were thwarted when the place I planned to eat at was shut for the evening, but I wandered into Puschka instead and had the most fantastic meal, paired with a Liverpool Gin G&T. Even better? Afterwards, I walked down to Belvedere Arms for a nightcap and met the master distiller, then proceeded to head to a jazz club with three of his friends. Nice folks, those Liverpudlians! #AmazingMoments

Head down to Albert Dock. Up and at ‘em and off to the port. You could easily spend a half-day popping into the brick storefronts, having a pint (or several) in one of the many pubs or marveling at the statues that adorn this historic waterfront area. While you’re in the area, pop into the free exhibits at the Tate Liverpool, increase your knowledge of the Fab Four at The Beatles Story museum and take a cruise around the harbor via the Dazzle Ferry, a boat that has been painted with splashy murals by Sir Peter Blake.

Pedal around the city with CityBike. Once you’ve got your bearings at the waterfront, board one of the bright green cycles you’ll see positioned at stands all around town and bike your way southbound along the shoreline for more picturesque panoramas of Liverpool.

Wine and dine in the Georgian Quarter. After returning to your hotel room to freshen up, it’s off to dinner at Puschka, a family-owned bistro that specializes in inventive, modern European fare. You’re not far from a favorite spot among locals, The Belvedere, so pop on over after dinner for a Liverpool G&T (the hotel/pub is also home to boutique brand Liverpool Gin.

Indulge in a spa treatment. By your third day, the jetlag may be getting to you, and there’s no better method to beat it than checking into the Spa at the Titanic Hotel Liverpool for the morning. With just four treatment rooms and a menu of ocean-inspired massages and facials, this subterranean grotto is the epitome of R&R—just be sure and save time to soak in the alluring pool when you’re done getting pampered.

Head out for low tide at Crosby Beach. The quickest way out to Antony Gormley’s Another Place, home to his famed Iron Men statues, is by taxi. Once there, you’ll want to mosey along the three-kilometer stretch of coastline to see the artist’s creations that were cast from his own mold.

Wander through Liverpool’s history. From Crosby, you can take the nearby train back into the city center and hit up some of the biggest attractions—like Liverpool Cathedral (where you can get sweeping views of the city from the tower), the Metropolitan Cathedral and St. Luke’s “Bombed Out” Church—by foot.

Dine in an old jailhouse. As the sun sets, grab a table in a former cell at the Liverpool One Bridewell for dinner—insider’s tip: try the city’s specialty Scouse while there—then have a nightcap at the opulent Philarmonic Dining Room, which just underwent a massive restoration. If you haven’t yet run out of steam, catch a show at the iconic Cavern Club where the Beatles got their start (there’s even a Beatles Tribute show every Thursday night)

Take a train to Manchester. While you could easily spend the better part of a week exploring Liverpool’s varied offerings, it’s time to get to know England’s sixth largest city and the birthplace of the industrial revolution.

Check into Hotel Gotham. Liverpool’s newest luxury option, this former bank-turned-Art Deco boutique hotel is the swankiest place in town in which to lay your head. Plus, there’s a martini trolley that visits guests each afternoon and evening—what’s not to love about that?

Up your sports knowledge. Not far from your hotel, you can learn all about the origins of soccer at the National Football Museum. If Manchester United is having a home game during your visit, you’ll want to see the action in person, as well.

Have a round at Club Brass. Before you head out for the night, steal away to Gotham’s seventh floor, the gilded members-only VIP lounge and Prohibition-style speakeasy, for a Lady Crumpsall’s Champagne Cocktail. On warmer evenings, the pair of patios is the perfect spot from which to take in the view of your Manchester surrounds.

Dine at Marble Arch Brewery. A quick cab ride from Gotham, this local gastropub brews up innovative beers like an Earl Grey IPA and serves great food to boot.

Oh, hello gorgeous! I was expecting Manchester to be a sterile, industrial city, but I could not have been more misled. There are some seriously stunning buildings in this town. //