Driving in the Wild East – Berlin

Trabant mural in East Berlin, photo by jumilla on Flickr.com 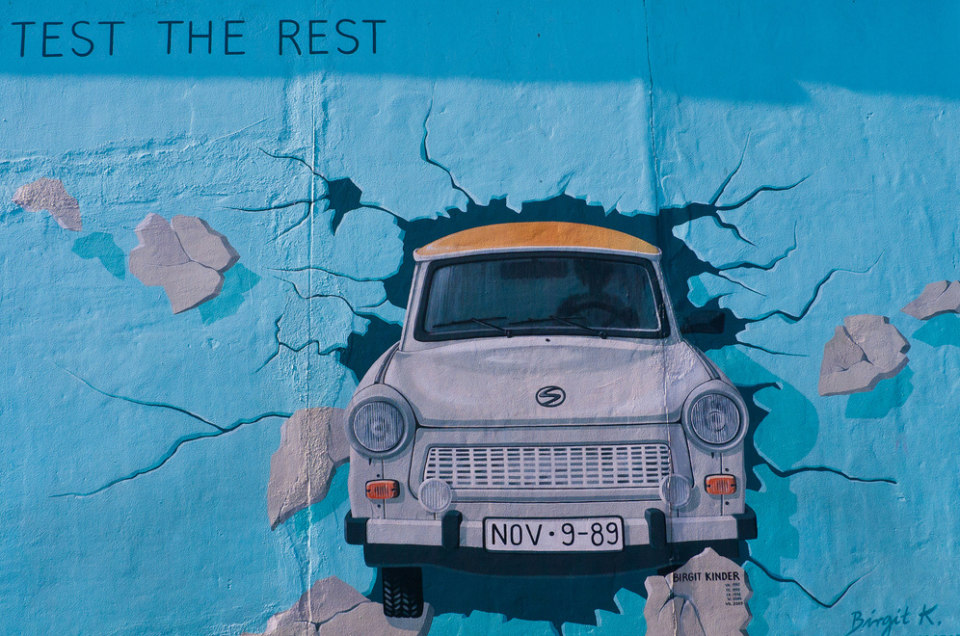 Trabant mural in East Berlin, photo by jumilla on Flickr.com 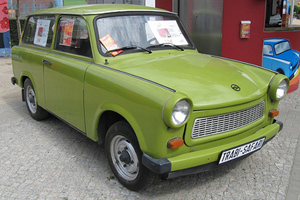 One of the Trabants available to rent, photo by whistlepunchk on Flickr.com 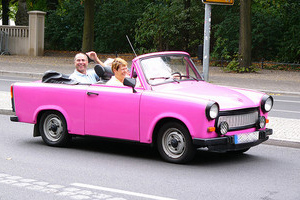 A pink convertable Trabant on the road in East Berlin, photo by johnsam on Flickr.com 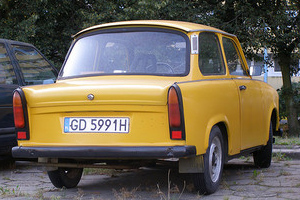 My hands clutched the steering wheel with a death grip as the car lurched forward. I squinted through the windshield as a wave of terror washed over me. There were other cars on the street ahead of me, and hordes of pedestrians crowded the sidewalks.

Yikes! Whatever had convinced me that driving a Trabant would be the best way to see East Berlin? My right foot continued to press on the gas pedal while my left hovered over the clutch. It was time to shift – but where was second gear?

The gearshift wasn’t on the floor, or even on the steering wheel, but sticking out of the dashboard. The L-shaped handle had no helpful labels to let me know where I was.

What were those instructions? Oh, yes. Up was first, down was second – but up was also third and down was also fourth. Reverse? That was all the way out. Reverse was the last thing on my mind as I slammed the clutch to the floor and wrestled with the gearshift.

The original owners of the Trabi had painted a turquoise stripe on the gray metal of the gearshift where it emerged from the dash. Faded, but still visible, it was all I had to go by. A partial stripe visible meant first or second gear, the full half-inch of color meant third or fourth.

My pulse raced as the engine gained speed. In went the clutch, down went the gear lever – and the engine lugged. Oh, no! The engine told me I’d gone from first to fourth, so I slammed the clutch to the floor and tried for second again. The engine revolutions settled into a comfortable hum.

As we gained speed, I slammed in the clutch again, and rearranged the gearshift into what I thought might be third, and timidly pressed the gas pedal. We kept moving forward without stalling.

Hurray! I’d made it a half-block on my driving adventure through the “Wild East” with Trabi-Safari-Tours!

Fortunately, I was not alone on the streets of Berlin. One travels in a sort of Trabi sandwich. I concentrated on the taillights of the lead car while the third car in the convoy brought up the rear. Instructions (“turn here”) are barked over the car’s loudspeakers as we bounced and squeaked along the streets. Shock absorbers and soundproofing are for effete westerners!

Starting at the Gendarmenmarkt, I clutched the wheel for about 45 minutes of cruising through the streets of East Berlin. A second brave driver took over at the halfway point when we stopped at the East Side Gallery – the longest surviving stretch of the old Berlin Wall. Its original graffiti art (including the infamous Brezhnev kiss) is peeling now, as the memory of the bad old days of Communist rule fades.

Once I was a passenger instead of the driver I could enjoy the ride. People waved at us as we drove along, finishing up alongside Checkpoint Charlie.

There are more than a hundred Trabis in the company garage, so you have your choice of style and color (mine was pale blue). There’s even the Stretchtrabi, a combination convertible and limousine.

Trabants, manufactured between 1958 and 1991, are an unlikely souvenir of Communist rule. They were the only car ordinary East Germans could buy during the days of the German Democratic Republic, so they represented freedom in an autocratic state.

Trabis weren’t cheap – 30,000 Deutsch Marks – and people waited for delivery an average of 12 years after ordering. Materials shortages behind the Iron Curtain resulted in a car made of Duroplast – a combination of cotton and phenolharz, a kind of plastic.

With a two-stroke, two-cylinder engine and 26 horsepower, Trabis are fueled like lawnmowers: one liter of oil for every 50 liters of gasoline. There’s no gas gauge, only a dipstick to check the level of petrol.

After my ride, I stopped into a souvenir shop near Checkpoint Charlie. An American tourist was debating with his wife whether to buy a yellow or a blue model of a Trabant. I pointed out the window at “my” Trabi and asked him, “Why settle for a toy when you can drive the real thing?”