Trekking in Spain’s only Rainforest

Taganana, Spain by BrainMaY on Flickr.com 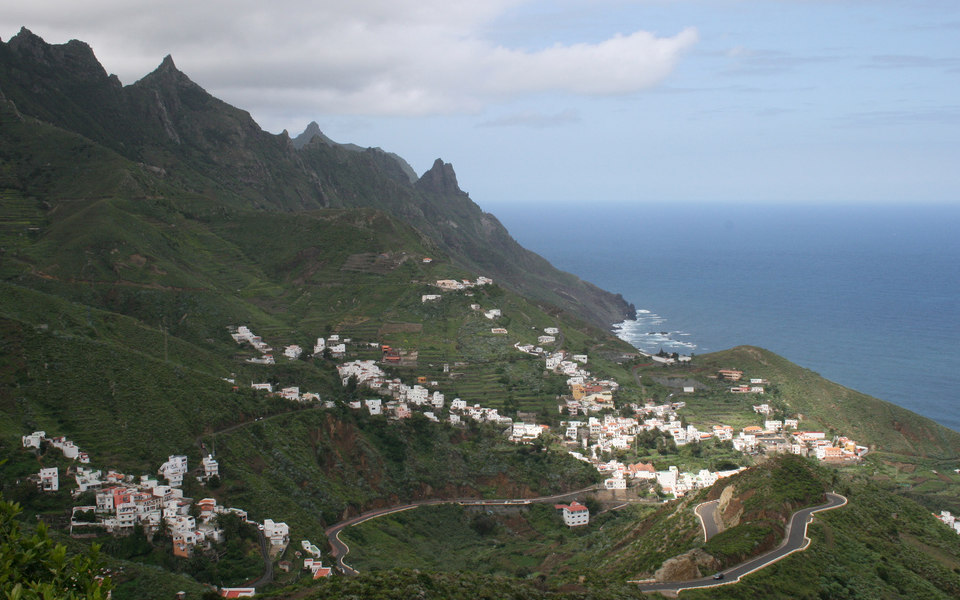 Taganana, Spain by BrainMaY on Flickr.com

In retrospect, what I’m most pleased about is that I didn’t slip and fall flat on my bottom. Others did, because the hike on the Camino de las Vueltas in the Anaga rainforest seemed deceptively easy. After all, it was all going down wasn’t it? But a rainforest is by definition wet and slippery – even in dry Tenerife.

I can imagine your incredulous grimaces: “A rainforest? In Tenerife?” Well, I was equally skeptical before we drove to the north-eastern corner of the island and entered the wet and wonderful world of Tenerife’s laurisilva. Our bus had brought us to the beginning of an old mule track, not far from the Pico del Ingles.

As soon as we started, the rainforest swallowed us up rapidly and protectively, hiding us even from the eye of Tenerife’s omnipresent sun.

Canarian ivy covered every bark and branch, its silver-tipped leaves providing a visual respite from the surrounding, overwhelming green. New, endemic plants enveloped us, such as the Canarian ilex, a holly-like bush with large, green berries. Primitive ferns of all sizes gave our trail an antediluvian air. This is a primeval ecosystem, a reminder and remainder of a much larger biosphere that dominated the lands around the Mediterranean, further up, before the last Ice Age.

As we penetrated deeper, the trees narrowed in on us. But no, not threateningly. This was not Africa, still only a boat-trip away: apart from the slippery ground, there were no other dangers. There are no snakes; and the biggest animals are rabbits, introduced by the Spanish in the 1490s. Further in, bright Canary bell flowers, orange-red and bulbous, marked our path like small Chinese lanterns pointing us on our way. Like many other perennial plants in Tenerife the heat and aridity of the summer cause them to go dormant so they are at their most imposing during the winter and spring months. Rare, endangered aeoniums sprang up from the ground like gigantic, green roses, their inflorescences thick and succulent. They shared the shade of tree heath shrubs with daintily speckled mosses, oversize dandelions and muddy mushrooms.

Two-thirds through the descent, we emerged at a natural amphitheatre and disturbed several sunbathing geckos that immediately disappeared from our sight. We were now in the open, facing a marine panorama dominated by a spectacular pyramidal rock. This was the Rock of Souls, in memory of those unfortunates who died trying to harvest cochineal, a beetle feeding on the cactus growing on the rocky slopes.

The surface had hardened, too, and it was then I realized I had survived without slipping. I wouldn’t like to have to negotiate the track uphill like the farmers of times past. They must have been as tough as their indomitable beasts of burden laden with produce for the capital’s markets. And, looking at the vineyards around us competing for space with sow thistles, it was not difficult to guess what that produce was. Wine has been the most important crop on the island since the Spanish conquest, essential to passing sailors as a source of vitamin C to fight off scurvy.

Our trail ended in Taganana, a small, impossibly steep, spread-out village, its front boldly facing the Atlantic and its rear safely backing onto the rainforest, a shelter and hiding place from the piratical invasions of yesteryear. It still is a production hub of the much sought-after, distinctive Tenerife lace: pins are inserted on a piece of wood like the spokes on a wheel around which an elaborate circular pattern is needle-woven.

The bus that left us at the start of the trek now picked us up and drove the last few miles down to the bay of Roque de las Bodegas. We rested our tired muscles at a seaside inn and ate a simple meal of potato soup, grilled octopus and fried Atlantic grouper. A few dozen surfers changed into their wetsuits to tame the evening tide’s waves and, as I watched them ride those swells, I felt a thousand miles away from the crowded island I had landed in.