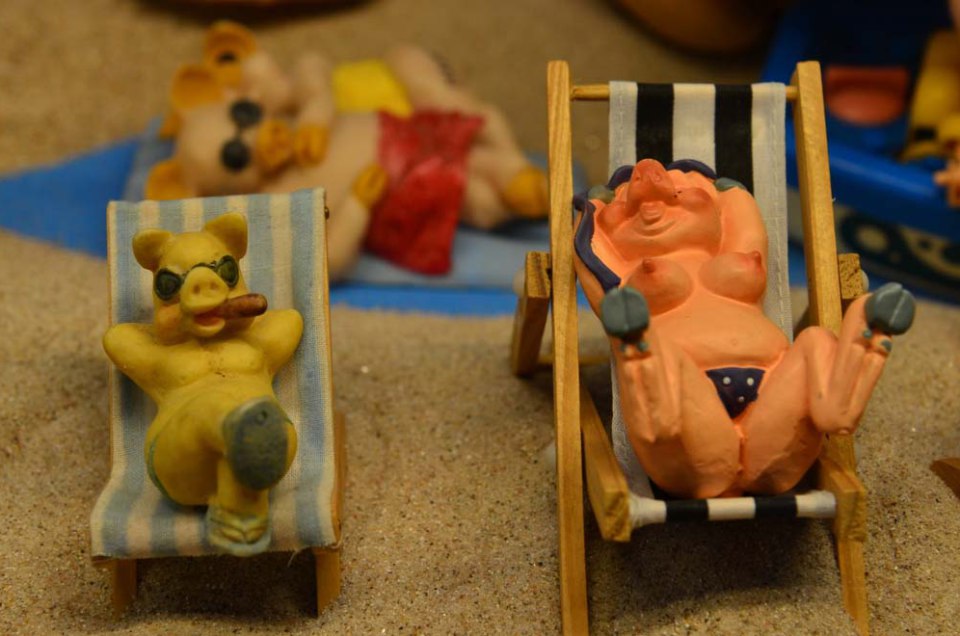 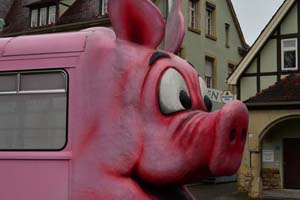 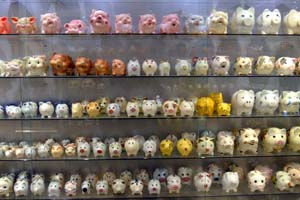 How many piggy banks are in this picture? Copyright John Malathronas. 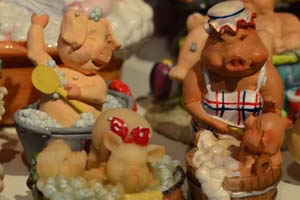 Mark Twain’s cutting dictum “German humour is no laughing matter” is an unfair witticism, as anyone who has travelled to Germany knows. Remaining doubters should set forth to Stuttgart, take the U-Bahn to the aptly-named Slaughterhouse station, and visit the world’s largest Pig Museum, where culture meets kitsch with its tongue firmly in its cheek.

You really can’s miss the museum getting off the train. A large pink-painted, pig-faced tram marks the spot. Conveniently this kooky museum is part of a restaurant complex where on the way out you can taste the cutlets and chops you kept salivating over while browsing the exhibits.

And there are no less than 40,000 of them that await you inside over two floors, ranging between the scientific and the scream-aloud preposterous. The first room starts predictably enough by enumerating all edible pork cuts: shoulder, loin, belly, back, collar, ribs, ears, knuckles, trotters (namely the whole animal) and what we do with them – from sausages to bacon.

From then on, however, the connection between us and our porcine friends steps up a gear after every room. Paintings and poems recall the time-old ritual of the boar hunt, while at the same time we are reminded that pigs have been domesticated for thousands of years: the oldest evidence being 9,000-year-old bones found in south-eastern Turkey. There are illustrations, hog skins, skeletons, pig breeds –plus a stuffed pig with two heads behind a glass case. How did they locate that?

An early nineteenth century poster for Toby the Sapient Pig catches my eye in the next room. Toby would “spell and read; cast accounts; tell any person what o’clock it is to a minute by their own watch; and what is most astonishing it will discover a person’s thoughts”. Taught by a certain Mr Hoare, Toby was exhibited to Londoners at the Temple Rooms, Fleet Street. He was the precursor of a number of famous showbiz swines, immaculately traced in the video displays from Disney’s The Three Little Pigs to Miss Piggy of the Muppets.

There is even an adult-only area where no under-18s are allowed. This refers to the pig’s seemingly insatiable appetite for sex; it’s where our expression “pig play” for raunchy sex comes from. No wonder, I say, as I read that the sow is fertile every three weeks and that the male has ejaculations that take a minimum of eight minutes to complete and sometimes last for half an hour.

Room after room our close relationship with these animals becomes more and more evident from the sheer number of books, comics, toys, linguistic expressions even porcelain pieces that have been inspired by pigs. And that is without the chamber of piggy banks in all shapes and sizes. The funny thing is that the custom seems to have sprung up in different cultures simultaneously. The oldest German piggy bank dates from thirteenth-century Thuringia; yet at the same time, the Kingdom of Mahapajit in Java also produced elaborate Oriental specimens.

By the end of the exhibition, I feel that there is something wrong with us humans. Some of us devour this animal with gusto (and China with a billion pigs leads the way), some of us cast it to the devil as unclean while some of us think it’s the cutest thing on legs and we paint it pink and cuddly. Love it or hate it, we seem closely bonded to the animal. I mean what about the final room that showcases the pig as a transplant donor? It is an animal from which we can actually harvest certain organs, though not many of us would cherish the thought.

I came for the fun and I leave fascinated, I tell the museum’s owner Mrs Erika Wilhelmer – as eccentric as her museum, she stems from Innsbruck in Austria. A collector of all things swine, she started a small museum in Bad Wimpfen a small village 50kms north of Stuttgart in 1989. By 1992 it was already in the Guinness Book of Records as the world’s largest pig museum with 25,000 exhibits. As these multiplied to today’s 40,000 the museum was relocated to Stuttgart in 2010 and is already one of the town’s big tourist attractions.

“Why collect pigs?” I ask her, admittedly stupidly.

She looks down at me through her Flying Pig glasses.

“Coz they’re adorable”, she replies .