The Ultimate High Speed ATV Rides in the Utah Desert 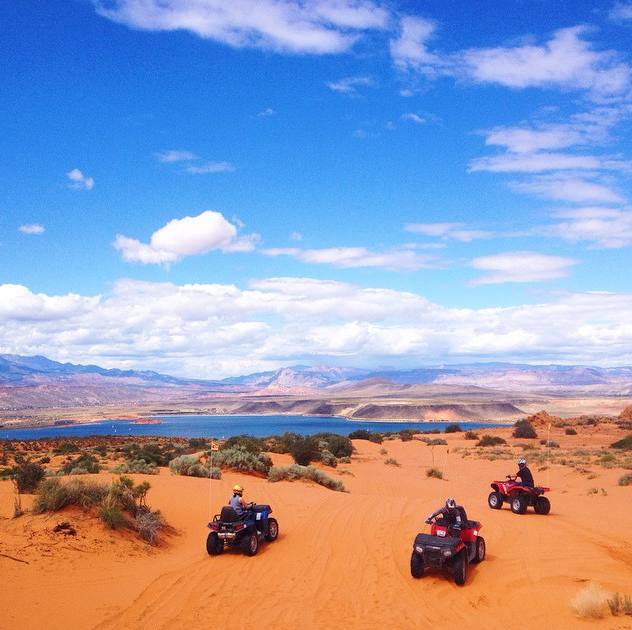 You can’t feel speed in a car. Speed is the rumble in your feet, the bang of dirt on your boots, and the wind pushing back as the world blurs in your periphery. To feel speed you have to be out in it, racing through the plains and popping over sand dunes in a landscape doing it’s best to keep up. That landscape was St. George, Utah.

From the moment our guide introduced us to our 4-wheelers, we knew this was going to be a full throttle experience. It might not have been the first thing he said, but as we choose our vehicles, he let us know that the only thing slowing us down would be ourselves. Compared to other off-roading tours where you’re given strict speed limits and safety guidelines, that seemed to fly under the radar here as we mounted our ATVs and headed off to the open range.

(Disclaimer: If you’re nervous about the “balls-to-the-wall” driving style, you can double up with a partner instead of trying it alone.)

Getting acclimated to the ATVs along paved streets, by the time we hit the end of the road, we were ready to crank it up. We peeled out, each kicking up a storm up rocks and dust that brushed over the helmets behind us. Minutes later, I caught a bit of air off an almost non-existent bump, and I knew we were going way faster than the average trail tour. My friend behind me knew it too.

It wasn’t all about speed though. Surrounding us, the trail shot though some of the most beautiful stretches of land I have ever seen, massive grassy pastures that rolled like waves caught between the red canyon cliffs. Our rocky path was simple enough to navigate that even flying through at double our street speed, there was plenty of time to appreciate the view.

When we finally cut our engines for the first time, the city was far behind and a low hum of silence rushed through the air. The sudden stillness brought everything into sharp focus, as we made our way to the rim edge. We could see the clay-colored canyons giving way to the valley floor spread out across the horizon. It felt like we were perched above the entire world.  We would feel this again on our next stop, but then it would be Saharan sand dunes sitting below as we dangled our feet off a diving board style outcropping.

Even riding two to a vehicle, we were going too fast for my friend. He hopped off and joined the guide in what can only be described as a rambler – a low-riding 4-wheeler surrounded by a metal cage, also available for rent which turned out to be just his speed.

As we revved our engines back up into full gear, we left the peaks behind, and dropped into a sea of amber dunes. I expected to slow down as we reached the dunes but nope, we were flying over the ridges, landing halfway down the slope with just enough time to twist the throttle and race up the next one. You can’t truly appreciate turning until you pull a hard right and a rooster tail of sand sprays up over your shoulder.

With three different terrains, wide open plains, rocky cliff tops, and massive sand dunes, the tour continually left us on the edge of our seats. Doing it all at top speed was a thrill that’s hard to match, especially the points where we caught air. Without a doubt, this was the best off-roading trip I’ve ever been on, and the pictures we brought back were incredible – especially the ones of us hanging out over the drop.

As we descended back toward the park opening, we all slowed down a bit to take in the last epic vista where the amber-red rock meets the edge of Sand Hollow Reservoir. It was a great last memory before we had to pile back in our car – a much less fun way to travel.

Canyoneering vs. Rock Climbing – What’s the Difference and Which Should You Try in Zion?

Red Mountain Resort: Where Adventure’s Right Outside your Doorstep