São Paulo by night, by rigues on Flickr.com 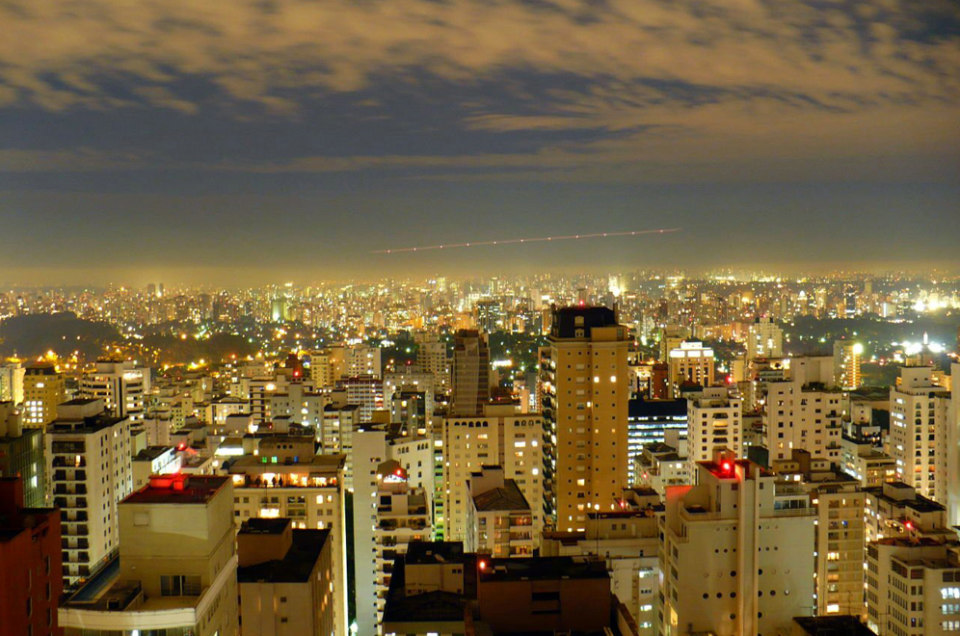 São Paulo by night, by rigues on Flickr.com

If Rio is the playground of the beautiful, São Paulo is the bear pit of the industrious: unlike the cidade maravilhosa with its tropical vegetation and curvaceous landscape, São Paulo lies in a spirit-levelled plateau with no obvious landmarks for reference, populated by motorways, cars and skyscrapers.

It seems endless and immeasurable and used to setting records.

But this is the also a city with Latin America’s own Empire State Building, the 1930’s Edifício Martinelli, long surpassed in height but not in its Bauhaus beauty. São Paulo is the powerhouse of Brazil’s economy, the sixth largest in the world. Its nightlife rivals that of London and New York and, yes, that of Rio whose citizens care far too much about their complexions to miss out on their nightly beauty sleep.

It is also the town that was built by coffee money. On Avenida Paulista you can still see some of the mansions of the coffee barons that used to line its span in the beginning of the last century. My favourite stands empty at number 1919. It is a two-floor mansion with parquets, hexagonal mosaics and a carved wooden ceiling. Last time I visited, there was an Internet café on the ground floor. Today, a sign on a marquee set on the spacious but neglected garden is advertising a warehouse party. I turn out in the evening: it is free. There is a DJ accompanied by a live drummer; it wouldn’t be Brazil without the drums.

Drinks are cheap, unlike in the expensive nightspots of the Jardins behind the mansion, and they are just two kinds: caipirinhas – that ubiquitous rum, sugar and lime Brazilian cocktail – and beer. They are sold behind a small bench, but even in this haphazard bar there is a stylish touch: the cans of beer come icy cold out of a freezer box, because Paulistanos wouldn’t have it any other way.

I look around me and I can hardly recognize the changes in the city’s denizens. Are these sweaty dancing creatures the same besuited men and buttoned-up women I kept bumping into the subway a few hours earlier? If not, where did they come from? And if yes, where did they find the energy after a twelve-hour day?  Is it the dark that rejuvenates this city?

Maybe it does. You see, it is at night that São Paulo commands your attention: this is when the neon lights and the flashing digital boards dazzle you into believing you’ve been transported into a Latin reflection of Tokyo or Los Angeles. This is when the rich and the beautiful hang out in the bars, clubs and restaurants of the Jardins district; they are too busy making money during the day.

And it’s at night that you finally realize that the two iconic Brazilian cities have something in common. The Cariocas flaunt their gorgeousness; the Paulistanos show off their designer ensembles: the pavements are their catwalks and the glitzy bars their auditoriums. Unlike Rio where a tanga swimsuit will get you anywhere, in São Paulo dress matters, because money does. Even in my coffee mansion rave, where loud, live drumming is supplementing the DJ’s mix, the clothes may be Brazilian – Mormaii, Bad Boy, Reef, Maresia – but they are definitely stylish.

I look at the drummer who is submerged in the beat.  Even drenched in perspiration, he, too, is part of the sway and spirit of the crowd, for the shirt he’s wearing is the trendiest and most expensive of Brazilian labels. I watch and envy him.

Did he spend all his money for that Redley?