Sami woman with white reindeer, photo by larsfl on Flickr.com 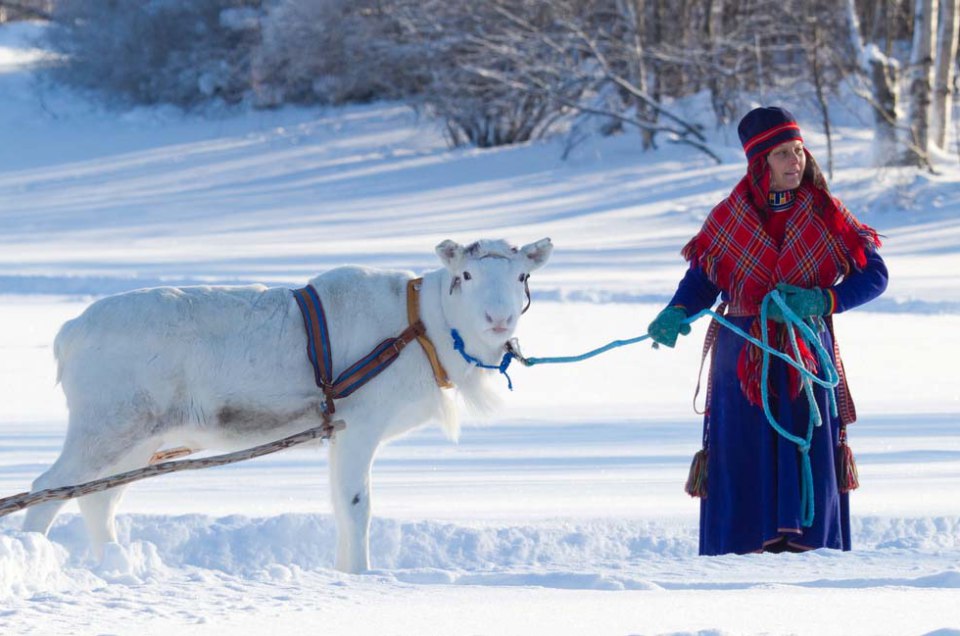 Sami woman with white reindeer, photo by larsfl on Flickr.com

Sometimes, a soul needs peace, calm, beauty and inspiration. It’s hard to find a place where time slows down, nature has its way, and ancient customs persist, protected from the rapid erosion of ancestral knowledge, tradition and wisdom.

The Sami—the only indigenous people in Europe—are now inviting visitors to experience such a world in Northern Finland. They work as reindeer herders, and while we rush, push and strive, they paddle down meandering rivers, tell stories in song, create jewelry, enjoy the serenity of summer sun, winter ice and snow, and admire the ephemeral, dramatic beauty of Northern Lights.

A 90-minute flight from Helsinki whisks you away to Ivalo, above the Arctic circle, in Lapland. In summer, the reindeer herders have 24 hours of sun, and in the winter, there are a few hours of light per day, but no sun.  “Most folks here –except for young people–like silence. The lakes, the loneliness, the luxury of silence—that’s the real Lapland,” said our taxi driver Soili. “The only noise is when the water runs.”

Half an hour later, we arrived in Inari, a 17,000 square kilometer area with two hotels, two shops, 6800 people and 42,000 reindeer.   We saw our first lichen-munching reindeer—and they were white. They are wild, and roam freely, but marks on their ears indicate that they belong to herders; there are more than 9,000 different earmarks in Finland.

It was calving season, and we walked to a penned area in the forest with a friendly, affable herder named Petri Mattus, to watch him lasso and earmark the baby reindeer, who shook off his quick nicks and ran back to their mamas. “They can walk when they are four or five hours old, and by the time they’re a day old, you can’t catch them,” Petri explained. About 30 per cent of them will fall prey to bears, wolverines and eaglets once Petri releases them from the penned area. When my husband Paul asked Petri how many babies he had earmarked, he bristled and asked, “how much money do you have in the bank?” It’s a question you don’t ask the herders.

In Petri’s green canvas tipi, he lit a fire and served us coffee, pulla (cinnamon buns) and dried reindeer meat, made from the animal’s back leg. Then he stretched out and told tales of legendary herders in the past.  Petri said that although he’ll never get rich from his herd, he loves nature, the lifestyle and his freedom.  In the winter, he does all the slaughtering, cutting and vacuum packing himself.

“You have experienced one minute of my life,” Petri said when we hugged him goodbye and left.

At the home of the Tuula family, we met and stroked their six gentle reindeer, who are raised for meat and as pets. We learned that each reindeer has its own individual antler shape, and that in winter, visitors can ride—like Santa—in a sleigh pulled by reindeer.

At night, at the Hotel Kultahovi, we scanned the menu, wondering whether we had the heart to try reindeer meat after our intimate contact with the animals.  “Go ahead,” the waitperson encouraged us. “It’s how people make a living here.” We took a deep breath and ordered Jerusalem artichoke soup with air-dried reindeer meat (about $11), traditional sautéed reindeer with lingonberries ($24) and reindeer steak.  The meat was surprisingly tender, not too gamey, and, paired with red wine, made a homey, memorable meal.

In Lemmenjoki—where all the houses except for one were burned down by the Germans in WWII– we spent half a day with the Paltto family of reindeer herders. Kaija, the mother, is a felt artist whose work is shown around the world, and Nils-Heikki, the youngest child, is a yoik artist.

“Have you ever heard of yoiking?” Nils-Heikki asked with a grin.

“Well, let me tell you about it,” he offered, and explained that a yoik is a sort of song with a story, and it may or may not have words. There are yoiks for mountains, dogs, special reindeer, wolves, snowmobiles, ATVs and people.”

Nils-Heikki said that many Sami do have their own yoiks and, in fact, it’s like having a second name. But tradition dictates that you can’t create a yoik for yourself. Nils-Heikki’s sister created his.

“When I’m alone in the forest with reindeer, I yoik my own yoik. It’s strong and powerful and happy, like me,” he explained. Yoiking was forbidden by church for about 50 years and now is coming back. “Yoiks kept Saami warm in the winter. It was a friend in the forest, on dark nights. When wolves heard yoiks, they stayed away. The Laavu (temporary shelters) were small, with no room for dancing, so, instead, we yoiked. “ Nils-Heikki’s yoiking was extremely moving: the loud, proud, hypnotic, heartfelt sound echoed in the living room.  “Is it made in the throat?” I asked. “No, in the heart,” the artist replied.

The family suited us up in warm clothes and we paddled down the river for l7 kilometers, surrounded by pristine nature and total silence. We climbed up to the Ravadas waterfalls, and then, around a fire, we were served reindeer soup and kettle coffee. No one spoke.  Finally, we said we felt like we were in such a remote world it could easily have been the North Pole.

Adventures with the Paltto family (about $33-46 dollars per person).

At the Hotel Kultahovi, rooms are basic but comfortable, and include a sauna, a drying room for clothes and balconies overlooking a forest and the Juutua river. www.hotelkultahovi.fi

The Sajos cultural center, which is shaped like a reindeer hide,  just opened this year.  Gorgeous arts and crafts are made of bone, wood, fiber, beads, leather and silver. In the winter, there’s a film festival in a theatre made from snow.  Hides are provided for warmth.

Siida Museum and nature center: It covers Lapland life from 12,000 years ago to the l990’s. Learn about a sacred island where locals went to bring gifs to Ajjih, the god of thunder; and discover the silver treasures that were unearthed in 2003. There are fine examples of shamans’ drums which, with mushrooms, facilitated passage between worlds: in the sky, on ground, and underground.