Sunset in Ko Lanta, Thailand (photo by Rushen on Flickr) 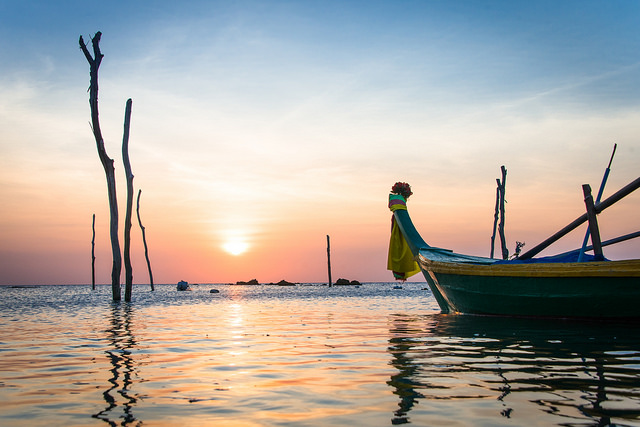 Sunset in Ko Lanta, Thailand (photo by Rushen on Flickr)

Three months ago you booked a summer trip to Thailand, and ever since have been looking forward to long days on the beach, soaking up sun and the colorful culture of this Southeast Asian vacation hotspot. Now you hear about violent outbreaks in Bangkok as the country’s military takes control, and wonder what to expect when you land.

Here are a few things to keep in mind as you head to Thailand:

1. Most cities are under curfews—but some tourist areas are not. On June 3 the military government lifted the nationwide curfews for Pattaya, Ko Samui and Phuket, some of the prime areas tourists are likely to be visiting. Other cities, including Bangkok, are still under a curfew from midnight until 4 a.m.

There’s an important exception, however, if you have a late-night or early-morning flight. CNN reports that all airports in Thailand are still open, and air passengers may travel freely to or from the airport, although it’s a good idea to have your passport and a printed copy of your flight itinerary available in case you get stopped.

2. Don’t expect to see military everywhere you go. Thawatchai Arunyik, governor of Thailand’s tourism authority, reassures travelers that it’s business as usual for most of the country. He told Travel Biz Monitor “The recent political situation only affected a few small areas of Bangkok, while in the rest of the country daily life was not disrupted at all. There is no military presence in popular tourist areas and of course no danger to travelers going out of their hotels and guest houses in the evening.”

Likewise, CNN reports that life in Bangkok is largely unchanged, and many locals have not seen one soldier since the coup on May 22. Expressways are open, public transportation is running, and taxis are available 24 hours a day at the airports.

3. You may not see as many fellow travelers as you’d expect. Tourism accounts for about 7 percent of Thailand’s economy, making it important enough that officials are working to ensure hotels, restaurants and other tourism-based businesses are affected as little as possible. However, Britian’s Telegraph reported that some five-star hotels are only about 30 percent full and have had to close onsite restaurants. This could mean hotels and restaurants offer more personal service—but normally rollicking party locales like Koh Phangan are likely to be quieter than normal.

4. Avoid talking politics in public. The British Foreign Office advises that country’s tourists in Thailand to be careful when making political statements in public. The Telegraph reported that some protestors have adopted the three-finger salutes from “The Hunger Games” as a signal they oppose the coup, and the military is considering taking action against those using the salute in large groups. Basically, its best to mind your own business if you see a group that looks like it’s getting rowdy.

5. Media—broadcast and social—may be spotty. Immediately after the coup, TV providers were only carrying the army’s TV channel, although all regular stations are back on the air now. Facebook is back online now, but was blocked in late May. Keep on top of the news by following key Twitter accounts: CNN recommends the Bangkok Post, travel blogger Richard Barrow and MCOT.