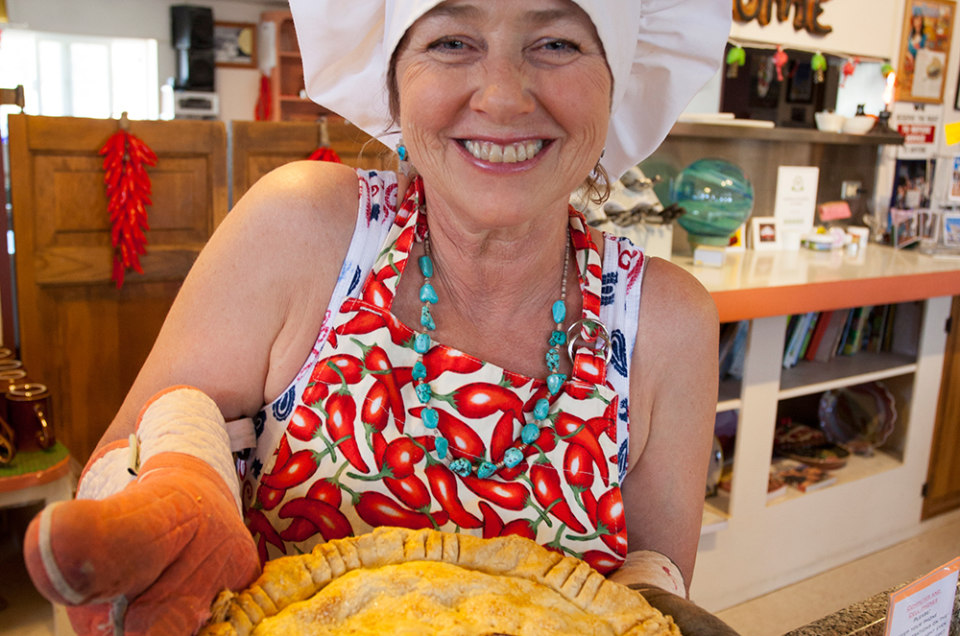 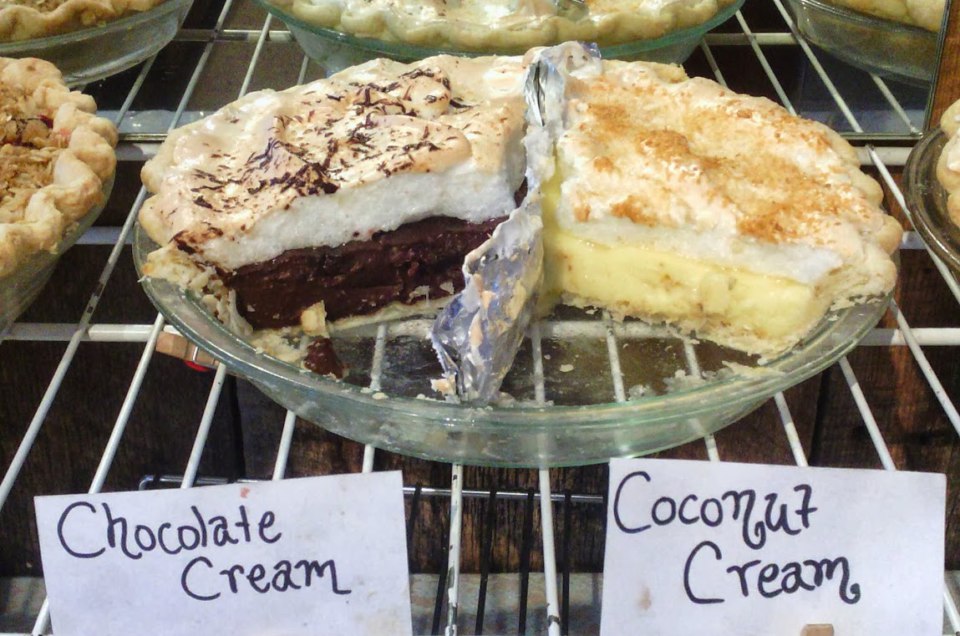 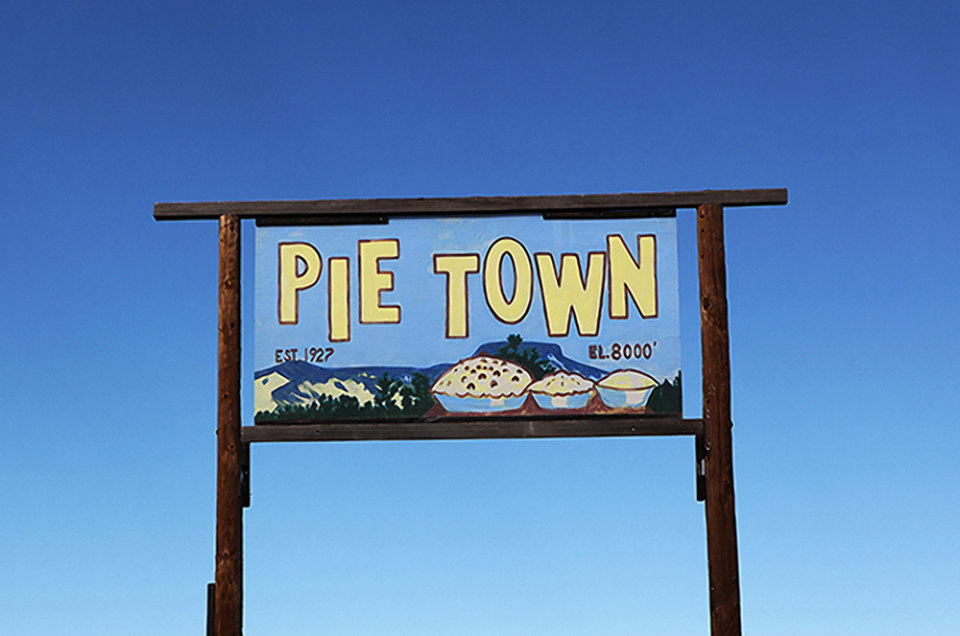 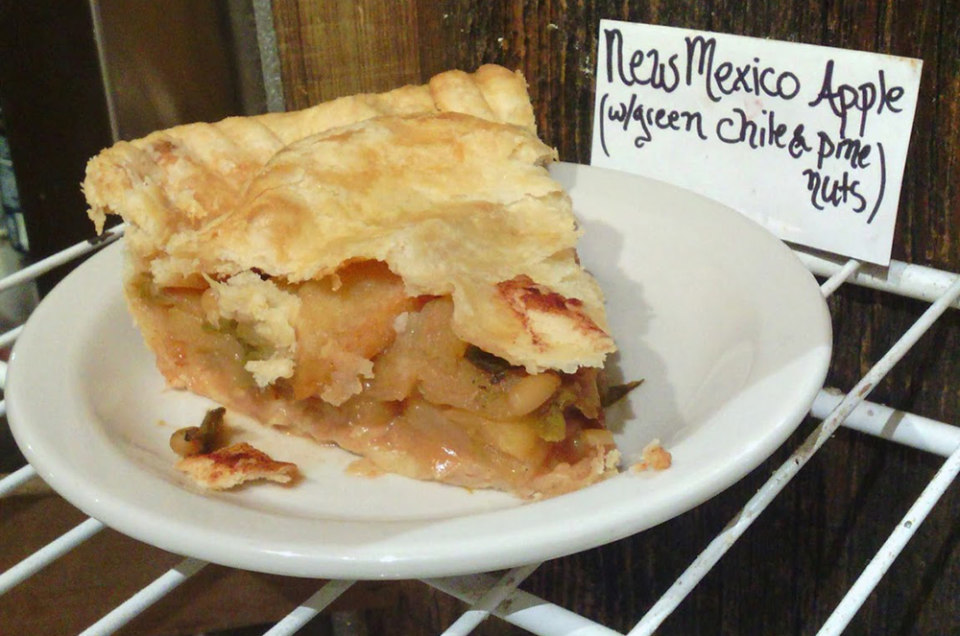 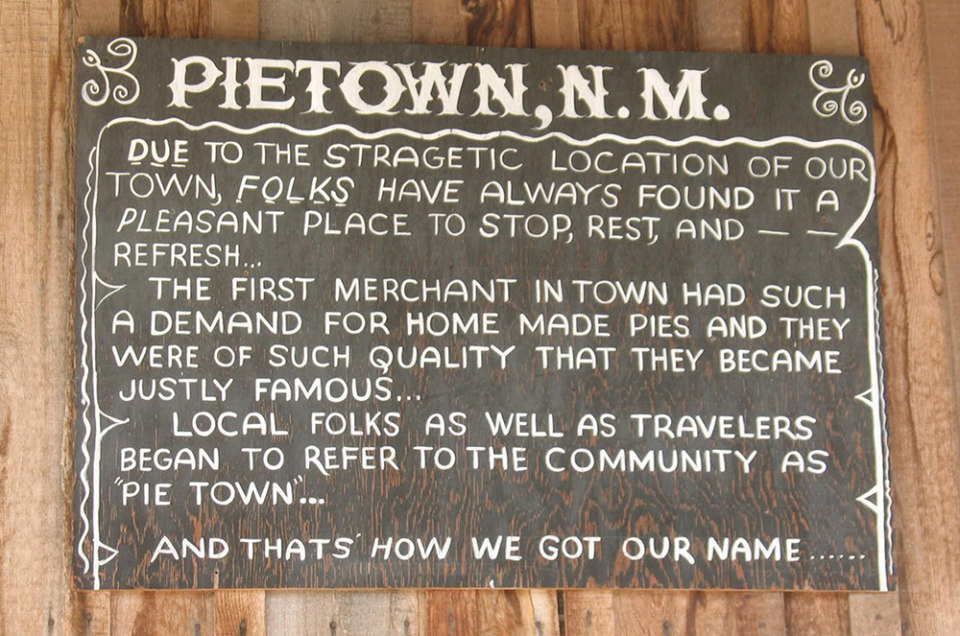 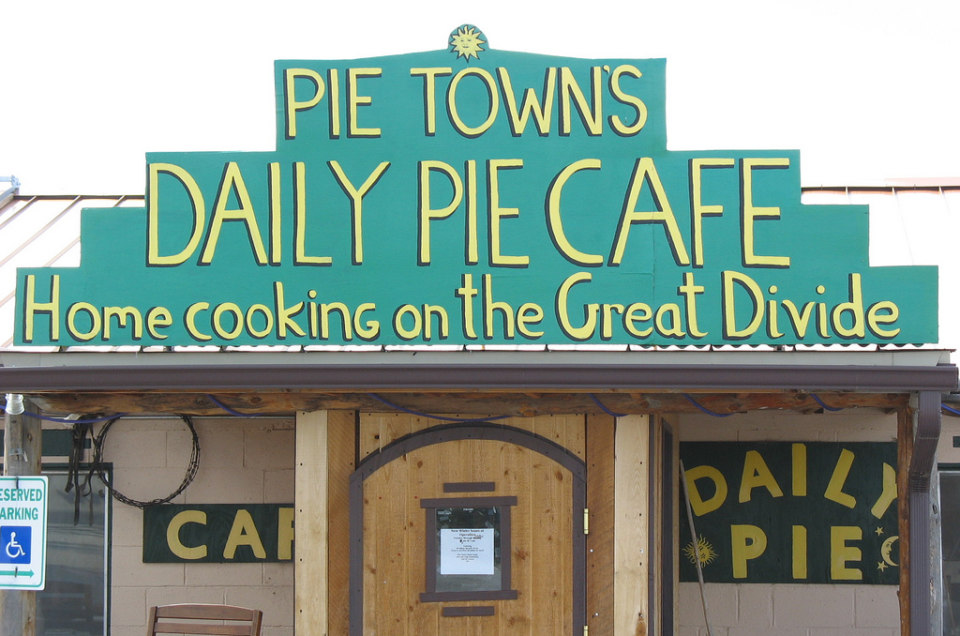 Pie Town, New Mexico seems like a made-up place. It’s the last stop along a road that never reached its full potential. It’s a desert town where fruit pies are a way of life. In a world where reality trumps frivolity, it’s an escape into the possibility of a magical realm, a place where for the brief time of a roadside stop, life can be a whimsical experience.

First founded by Clyde Norman in the 1920s before nearly going belly-up, Pie Town was narrowly rescued in 1995 by an Atlantic Coast “Pie Lady,” who—with her arrival, not to mention sweet tooth—gave visitors a reason to experience this town firsthand.

But in a world of Instagram where aesthetics are rewarded, the way to understand Pie Town best is to meet it as it feels: Wes Anderson-like, with his impeccable, muted-colored designs, and Alec Baldwin doing the voiceover.

All true events; all fictional order.

We open on a desert landscape. A wide-angle lens reveals a coyote panting at the roadside, golden-brown crumbs sticking to his wet nose. As he saunters left, we dolly with him, following as he walks back to the dented pie tin he’s been licking for the past so many minutes and resumes his exploration.

We continue down the road past the coyote. Above, a sign moves through the screen reading “U.S. 60: ‘See the Pacific!’” except “Pacific” is crossed out and instead—in Futura font, of course—it reads: “See Quartzsite, Arizona!” We roll to a stop with a wooden café perfectly centered in the frame, the pastel red lettering of “Pie-O-Neer,” with two meanings, cutely framed over a mint-green door.

“In this century, the best thing to do with lemons is to make lemonade, and so it was only fitting that Clyde Norman made his into apple pies. In fact, if myth is believed, Clyde’s lemons ended up making the ‘best dried apple pies around.’”

Cut to a wide roadside shot, stylized as black and white archival footage:

Clyde Norman stands in the middle of the desert wearing a pressed military uniform, his upraised hand holds one of his pies. We smash-cut between close-ups of his large belt buckle and then his military metals, showing that he is both a Texan and a war veteran. We return to a full-body shot of him as he looks both ways down the blacktop and then turns from the road and walks away from the camera, toward the Continental Divide. We hold on this shot, Clyde disappearing into the distance as the narrator reveals the future he is walking into.

Alec Baldwin: “Starting in the 1920s, Clyde would walk seven miles to sell his dried apple pies, giving the town its name, but like the highway they were sold on, things were going to dry up. By the time 1995 came around, Pie Town was pie-less.”

Perfectly centered, in full color, cut to a close-up of Kathy Knapp, golden brown hair up in a bun, heirloom rectangle glasses set on the bridge of her nose, the red straps of her apron just visible. The muted yellow text appears: “The Pie Lady.”

We tilt down to find Kathy opening a book of recipes. She runs her finger along the ingredients while we cut into a close-up. The recipe headline reads: “A Pie Town.”

When picking your town, choose one on the smaller side; larger towns have a tendency to bake into cities. You’ll know it’s ripe if you can perform the quant test (quant test found on page 32).

We cut back to the close-up of Kathy Knapp, where the muted yellow text still reads: “The Pie Lady.”

Alec Baldwin: “Since 1995. But this is not just Kathy’s story. This the town of the lemons she squeezed again.”

The doorbell bangs as we whip-pan to the dining room, where a city couple streams in, hand in hand, amid the crowd of cowboys, bikers and locals. Heads nod greetings as they pass through to the empty table.

Alec Baldwin: “As frequent visitors to oases know, the community is built by everyone who is willing to make the journey. In Pie Town, that means people share the experience and celebrate that everyone arrive here on their own adventure.”

Owen Wilson: “Please come to the annual Pie Town Pie Festival. We have really outdone ourselves this year.”

As Always – the Second Saturday of September

The brown leather booth rustles as the city couple takes their seat. In front of them, two hikers stand and begins photographing their slices of pie with a vintage Pentax K1000, strap worn around the neck.

Alec Baldwin: “Pictures of what has been done along this stretch of highway between the Pie-O-Neer and The Daily Pie are found in the USA’s Louvre, the Smithsonian archives, but it’s obviously the desserts that give the town its name.”

We whip-pan to a centered wide shot of “The Wheel of Pie,” beside which stands Paul Painter, hand at the ready. An old cowboy in his late seventies, Paul is beaming, his years of daily visits have all lead to this. He spins the wheel and crosses frame, calling out, “See y’all tomorrow.”

His words drift out as we jump into a tight close-up of the wheel, the painted text “today’s pies” spinning clockwise in the wheel’s center as the board rotates. Slowing, we see the pie names tick by: Triple Berry, Cherry Streusel, Boysen Berry (spelled Pie Town correct), before the wheel slows to a stop on New Mexican Apple.

We peer into the kitchen where the Pie Lady is adding apples and green chilies into her pie mold (labeled New Mexican Apple) before walking to her oven and out of our view.  We are left at the country-style kitchen, mementos filling the room’s corners. Across the counter, we can look out at the rear window, and slowly we begin to drift toward its sunlight.

Outside, we can see the shape of Paul climbing into his nostalgically aged truck. The photographer couple pulls on their rucksacks, Pentax and binoculars at the ready as they head for the older ghost town buildings that fringe the edge of town.

Dust blown up by Paul’s radials wafts in the air when we push through the window and are back onto the blacktop—”U.S. 60: Travel The Atlantic to Quartzsite, Arizona.”

Alec Baldwin: “Despite its citric acid, lemonade is not a drink made available during arguments or shared between enemies. The ingredients that have gone into Pie Town made it one of the bright glimmers of everyday fantasy spread across the continents. It’s become similar to that special place you want to take your parents when ‘you make enough money’ or the place you want to remember holding hands with your first love. It’s a desert town, down a road to Quartzsite, that makes fruit pies.”

We see they coyote from the beginning wander up to the café’s porch, sit, paw up, begging for more.

Cue record player: “Me and Julio Down by the School Yard” by Paul Simon.

Where to Sip and Swirl Your Way Around Sevierville