There are plenty of opportunities to learn in the park. Photo crédit: Steve Deschenes.

There are plenty of opportunities to learn in the park. Photo crédit: Steve Deschenes. 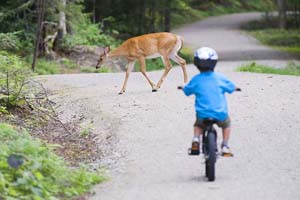 There are deer everywhere, and they pay little attention to humans. Photo crédit: Steve Deschenes. 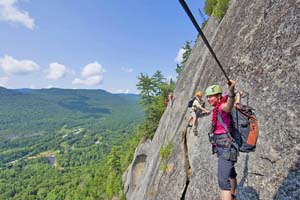 The Via Ferrata is an amazing and very accessible climb. Photo crédit: Steve Deschenes. 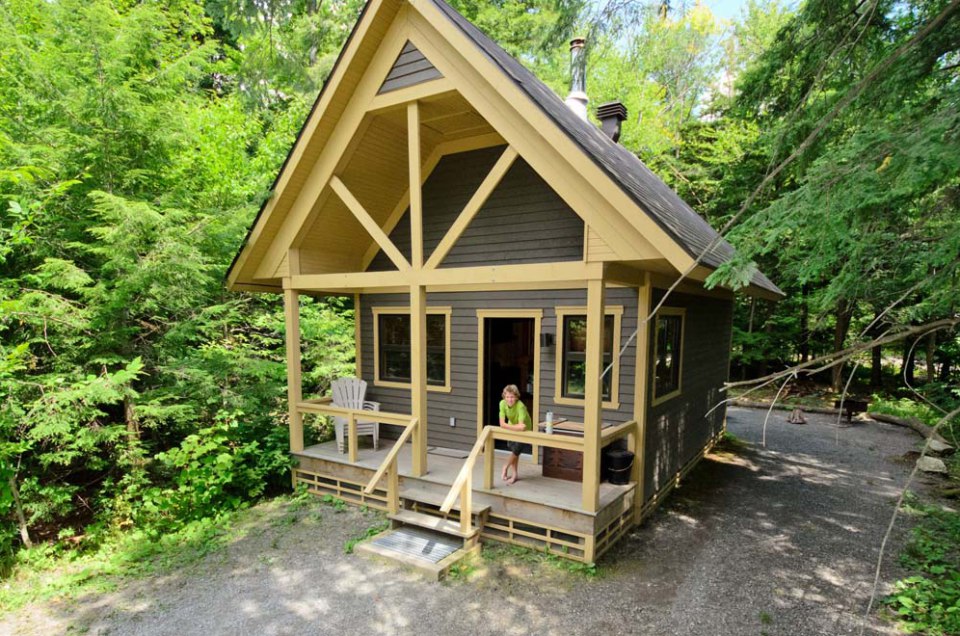 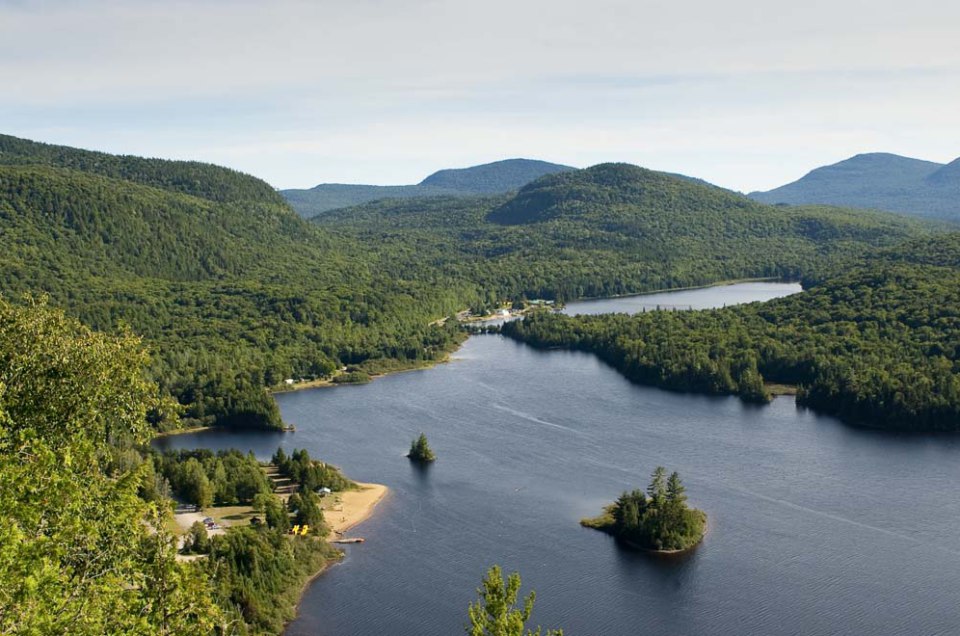 The park has lots of stunning vistas. Photo by Tourisme Laurentides. 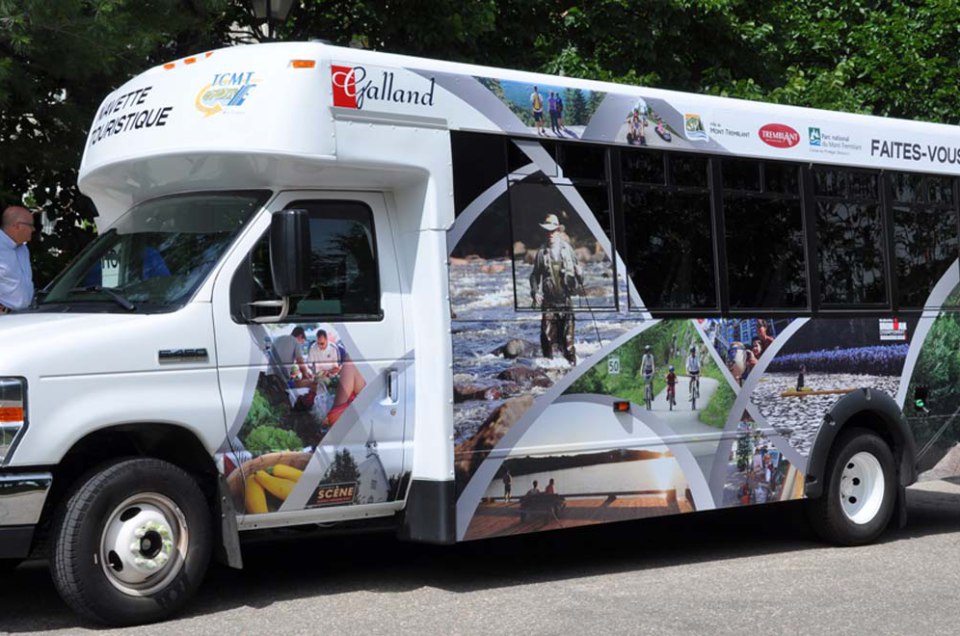 You can't miss the shuttles that take you from the resort to the park. Photo by France Léaonard.

The sun was already going down as we left Tremblant to go stay overnight in a nature cabin at Parc National Du Mont-Tremblant, and moments after we saw a sign warning us to watch for deer, a doe and two fawns skipped out in front of the car, giving us a mini-heart attack. We drove slower, seeing two more deer on the road, and several others in the bushes by the road. There was no doubt, this part of Quebec was wild.

We reached the park, and were instructed as to how to reach our cabin. We had no idea how rustic the cabin would be, and whether there would be electricity or an indoor toilet, so when we pulled up and found an almost new chalet style building that not only had power, but also a full kitchen, bathroom with shower, and woodstove, we were very, very happy. I claimed the downstairs double bed to share with my six year old, and our friend Jade took one of the two single beds on the mezzanine level. It was pretty late, so we headed straight to bed, after opening all the windows wide as it was rather muggy outside.

I woke up to hear loud scratching sounds, and a fleeting moment of terror invaded my semi-conscious state. I scrambled over to wind the window closed, the noise stopped, and I passed back out. I had a vague idea of what might be lurking outside the cabin, and hoped it was just a raccoon, or a really big squirrel that was out by the window.

I soon forgot, and fell back to sleep, waking with the dawn and wishing I’d brought coffee with me. I took a walk down to the water, as we were situated on a huge lake, something we’d not realized in the pitch black as we drove in. We ate sandwiches at the dining table of the cabin for breakfast, loving the solitude of this beautiful place, and waited to meet our park guide, Jean-Francois Boily.

Boily arrived with raincoats, as a storm was rolling in, which meant that our scheduled canoeing trip was not likely to happen, but we were still going to be able to hike through some beautiful parkland to impressive waterfalls. When he asked how we slept, I told him about the noises I’d heard. “It is always raccoons,” Boily said, “they are constant night visitors because they know that people leave food around the camps.”

And there are lots of camps for the raccoons to try their luck at: The park has more than 1000 campsites, ranging from the primitive to super-deluxe. As spiffy as our nature cabin was, this summer the park will be offering accommodations in their EXP architecturally designed, glass walled prefabs (they look like they came straight from the pages of Dwell magazine).  There are also yurts to rent, and structured tents that come complete with beds, grills and mini-kitchens. Whatever your camping style, you’ll be all set here.

We went for a drive to the impressive new visitor center (it had opened just days before our arrival) and had coffee (thank goodness!) while Boily showed us the iPod Touches that visitors to the park could borrow that led them on interactive scavenger hunt like experiences through nature, where you scanned QR codes on signage along the way, a cool concept and one that would entertain tech hungry kids and teens when visiting the park, and add a fun modern twist to any visit. The center is a great place to explore, with comfortable chairs and tables, and a very modern looking wood stove at the center of the room. There is also an auditorium there, though it wasn’t quite finished when we visited.

Just outside the center was a table set up with beaver skulls, hides, and photos demonstrating how the park deals with the serious issue of its resident beaver population trying to divert water flow and create new lakes at strategically impractical places. There was a knowledgeable park interpreter there to answer questions, and explain what exactly those pesky beavers were up to in the photographs.

There are a number of different learning experiences to be had in the park, many of which are free to attend, although those requiring equipment rental (such as Sea Kayaking with Loons) do incur a fee. The one that really appealed to me was the Wolf Story, where you learn about the park’s wolf population through storytelling around a campfire. There are seven wolf packs in the park, with some 35 wolves in total (they are rarely seen by visitors though, Boily assured me. You can pick up a program of what events are happening when you enter the park.

The park is set up for adventure, and there are lots of opportunities to kayak, canoe, climb, and take advantage of the huge mass of parkland. The park is so big that it takes a full two hours to drive across it, and there is so much space that even in the height of summer, you might not run into any visitors, and there are so many lakes that you’ll always find a secluded beach to lay on.

If you don’t mind heights, there is an amazing adventure to be had at the Via Ferrata, a course of beams, footbridges and suspension bridges takes you over the rock face of La Vache Noire, one of the mountains in the park, at an altitude of over 650 ft.

We did go for a gorgeous hike in the rain, to a place known as the Devil’s Falls, and admired the mighty churning water crashing on to the rocks below. Even in the rain, we got to see how absolutely beautiful the park was, and could see what in incredible time could be had there. I know we’ll just have to make a return trip in order to discover more, and immerse ourselves further into all that natural beauty.