Driving, eating, and luxuriating on the Amalfi Coast

The view out over Positano, photo by Earl Schwartz 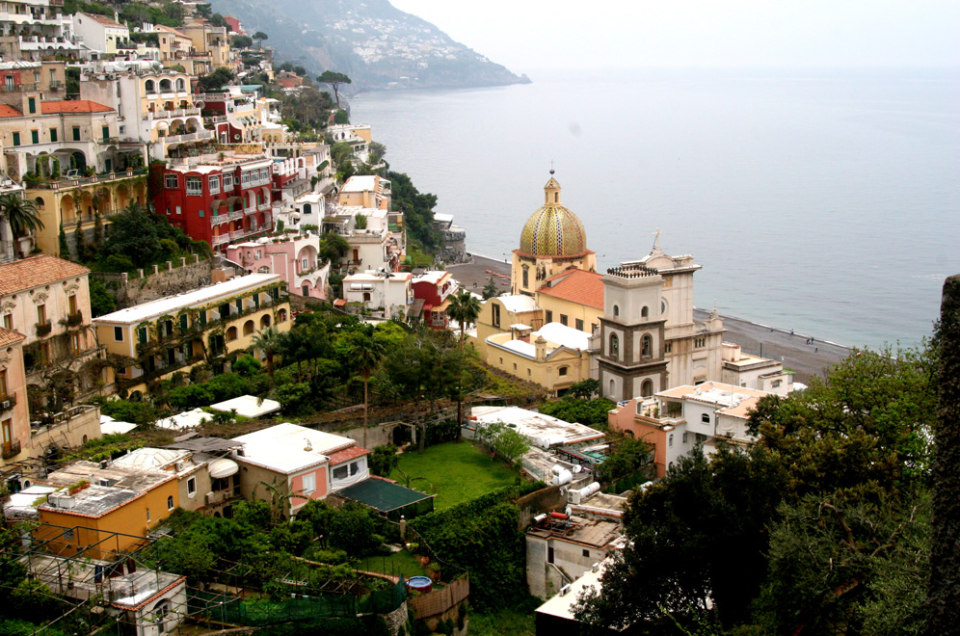 The view out over Positano, photo by Earl Schwartz 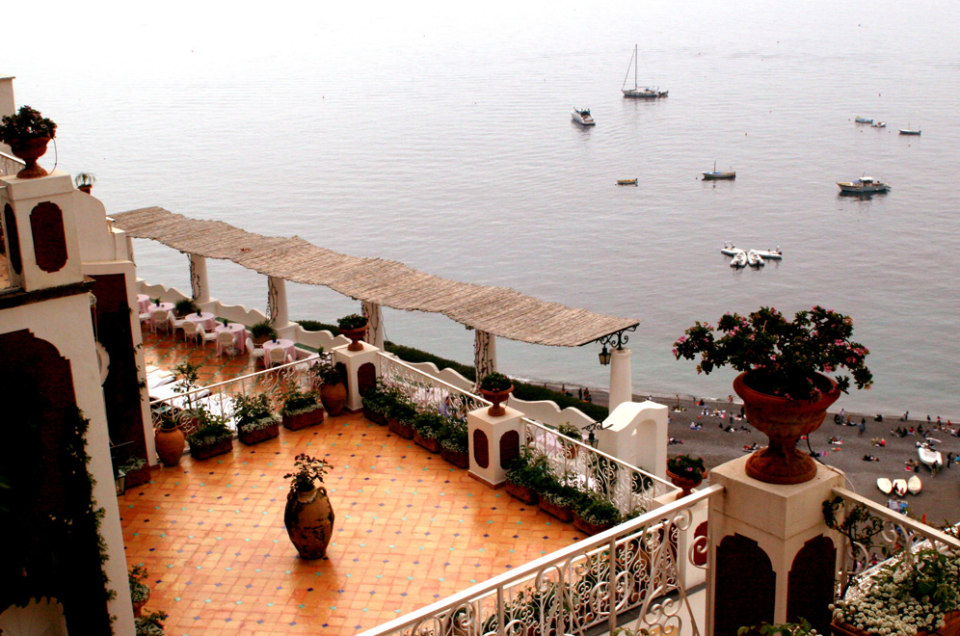 View from our balcony of Le Sirenuse and Positano, photo by Earl Schwartz 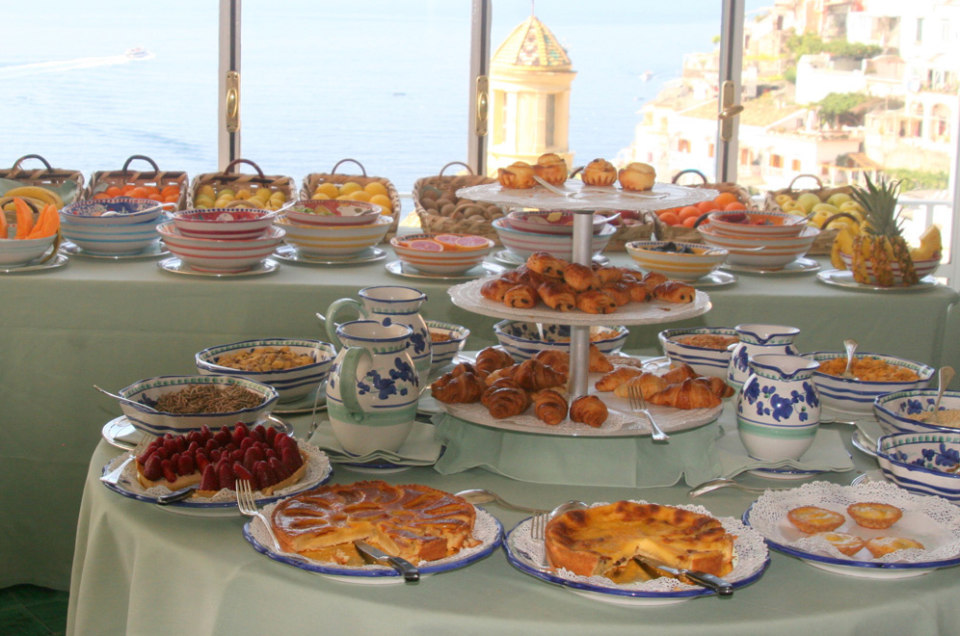 Breakfast sweets at Le Sirenuse with a view of Positano, photo by Earl Schwartz

Another view of the coastline, photo by Earl Schwartz

Back in 1953, John Steinbeck penned an article for Harper’s Bazaar about his harrowing drive along Italy‘s Amalfi Coast. “Flaming like a meteor we hit the coast, a road, high, high above the blue sea, that hooked and corkscrewed on the edge of nothing, a road carefully designed to be a little narrower than two cars side by side. And on this road, the buses, the trucks, the motor scooters and the assorted livestock.”

“We didn’t see much of the road,” he continued. “In the back seat my wife and I lay clutched in each other’s arms, weeping hysterically.”

He added that his first visit to the same coast on an American destroyer under German fire felt safer to him than this road trip.

I understand his sentiments completely.

Driving along the Amalfi Coast is like no other experience. On our first trip, we were heading to Le Sirenuse, the same magnificent hotel in Positano where Steinbeck stayed.

After about ten minutes of navigating the coastline,  we witnessed firsthand how two cars, side by side,  didn’t always fit on the  narrow road. Such was the case when an oncoming car knocked our side view mirror into our car. Fortunately my husband was able to multi-task and caught the mirror while driving.  I, though, was frozen to the spot. The second time this happened, I barely blinked.

The breathtaking beauty of the Amalfi Coast, though, definitely makes up for the fear. At every turn – and there are many, many turns along the over 60 kilometre road – there is yet another spectacular scene. The road weaves through the rocky cliffs while hundreds of feet below are the shimmering blue waters of the Mediterranean. Along the way you can see small fishing boats dotting the grottos, whose colour changes in the sunlight. If  you can tear your eyes away from the precipitous drop below, the road itself is filled with an abundance of colourful flowering trees and vines.

Each day, we planned an itinerary to one of the small towns along the coast –  Amalfi, Sorrento and Minori. With all the twists and turns in the road, if the speedometer hit 35 kilometres per hour, it seemed like we were speeding. At many spots, because the turns are so dramatic, there are large mirrors situated on the side of the road to allow drivers to see the oncoming traffic. The first few times, seeing a bus heading towards us struck fear in our hearts. But in no time, we realized the bus drivers were the real experts of the road. Get behind one and you were set for a smooth ride. Added to our slow pace were all the lookout points along the road along with stands selling luscious bunches of cherry tomatoes and assorted local fruit including gigantic lemons.

The first time we drove at night along the dark road – no overhead lights along the way – when we reached Le Sirenuse, it felt as though we were home.  But home was never this luxurious. Run by the same family, the Sersales, as it was in Steinbeck’s time, the hotel continues to receive rave reviews. A few years back, it was listed as the top-rated property in the world in Condè Nast Traveler magazine.

There is no setting as romantic as this 18th century palazzo, carved into mountain overlooking the Bay of Positano. The furnishings, flowers, cuisine and service are simply dazzling. In fact, exploring the hotel and examining the array of antiques could itself have been a day’s activity if we didn’t tear ourselves away. A guide from the front desk describes it all: from the 15th century framed passports, the  series of 17th century prints depicting the kings of France and the bar dating back to the early 1600s which was originally a work table for a Neapolitan jeweler.

Sitting on our bougainvillea-covered balcony, amidst the  scent of lemon blossoms that  permeates the entire coast, we sipped the local liqueur, limoncello and watched the rhythmic waves of the sea. With music on the DVD player, it was a heavenly way to relax after driving on the coast.

In the morning, as we ate breakfast surrounded by all manner of flowers on the patio overlooking Positano, the topic of driving on the Amalfi Coast  came up with some fellow guests. For certain activities, some hired a car and driver through the hotel. Other times, they simply walked a few hundred metres up the road to the edge of town and opted for public transportation – a fast, cheap and stress-free way to get around.

Dinner at Le Sirenuse the next night was certainly appealing, not just because we didn’t have to drive. In La Sponda,  bougainvilleas  line the ceiling, lemon trees provide privacy between the tables and hundreds of candles- which take a full two hours to be lit –combine for a spectacular setting all with a view of the lights of Positano  and the sea. But the stunning scenery doesn’t hold a candle to culinary offerings – fabulous seasonal produce, the freshest fish and cheeses such as Buffala mozzarella  from nearby farms.

Chef Matteo Temperini learned his craft in kitchens around the world- Paris, New York, Macao and finally at the nearby two Michelin-starred Don Alfonso. And as Alfonso Iaccarino and his family did with Don Alfonso , Chef Temperini, with his Mediterranean creations, has brought a Michelin star to La Sponda.

We had also heard about the delicious offerings at the Villani family restaurant Donna Rosa, but were a little wary about its location five miles up winding roads above Positano. It was worth every twist and turn on the road – both the unbelievable views on the way up as well as the fabulous eats. Diners who have made their way to sample the offerings include celebrated chefs like Jamie Oliver and Alain Ducasse. As we shared dishes like ravioli filled with eggplant and sauced with cherry tomatoes, basil and a fragrant olive oil or the Mediterranean sea bass with black olives, capers, almonds and pine nuts in a white wine sauce, I had to grab the plate from my husband as he tried to wipe the plate clean with his fingers.

The next day, we ventured to the southernmost town on the coast, Vietri Sul Mare, where shops and galleries are filled with both traditional and modern ceramics. The charming spot, known for its colourful tiles, draws artisans who create pottery right in their shops.

As we drove back towards Positano,  each town seemed to beckon. In Cetera, a small village known for anchovy fishing, an elderly man outside a fish store was salting fresh anchovies to put away in a barrel. He patiently repeated row after row of fish and salt, likely something he had been doing for decades.

Further down the cobblestone street at the convent-turned-restaurant Al Convento, we sampled the fish in traditional Amalfi specialties such as mozzarella stuffed with fresh anchovies. Afterwards we stopped by a local shop for a few bottles of  colatura di alici, a traditional amber-coloured flavouring made from the free-run juice of salted anchovies – a perfect way to savor a taste of Amalfi in our own kitchen at home.

On our way back, later than we had planned, it was both dark and unusually rainy – a combination which resulted in my closing my eyes all too frequently as we rounded many twists in the road.

I do have to say, though, that I gained new respect for my husband Earl’s driving but it didn’t take me long once we were home to chastise him for the same things I admired along the Amalfi Coast. Maybe it was the perfume or the romantic setting but he’s ready to go back with me in a flash and hear me lavish him with praise.

Eight Great Ways to Enjoy the Outdoors in Sioux Falls