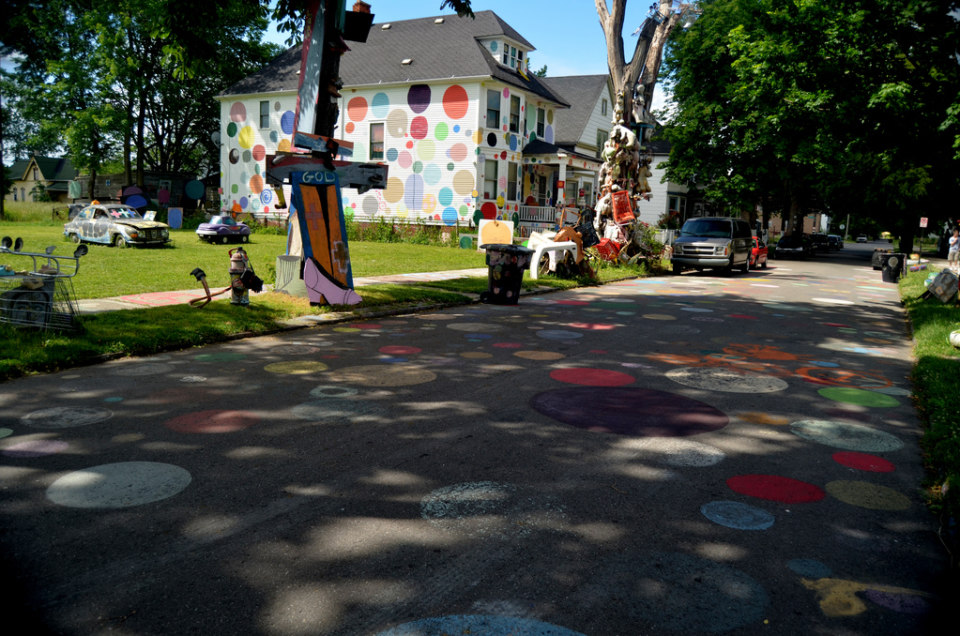 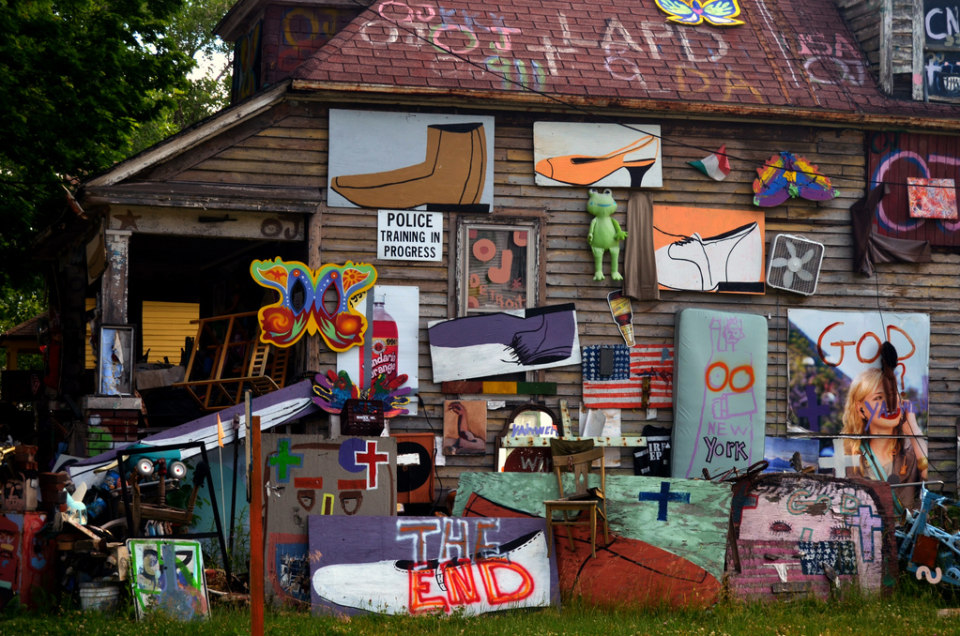 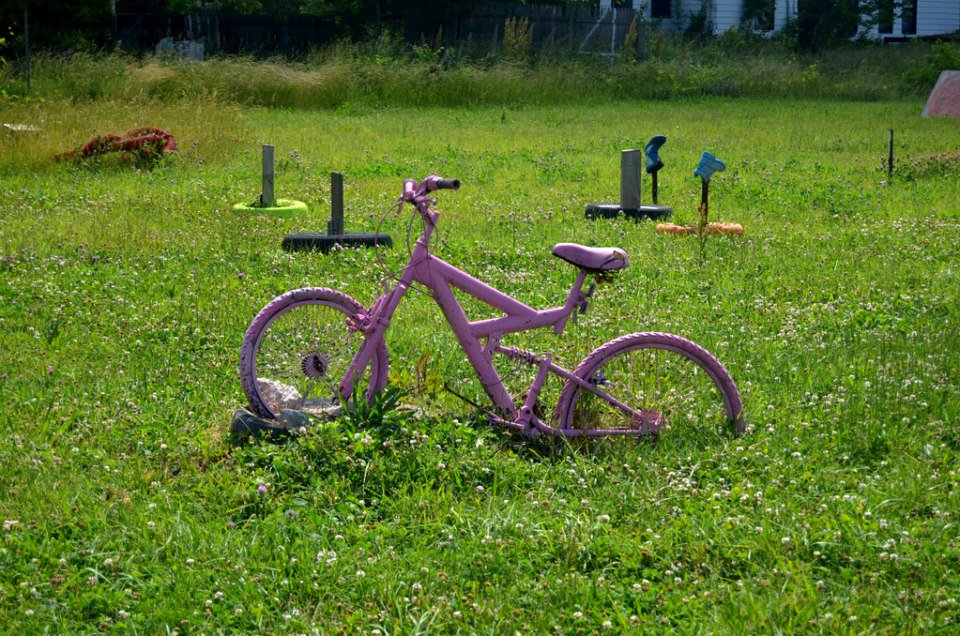 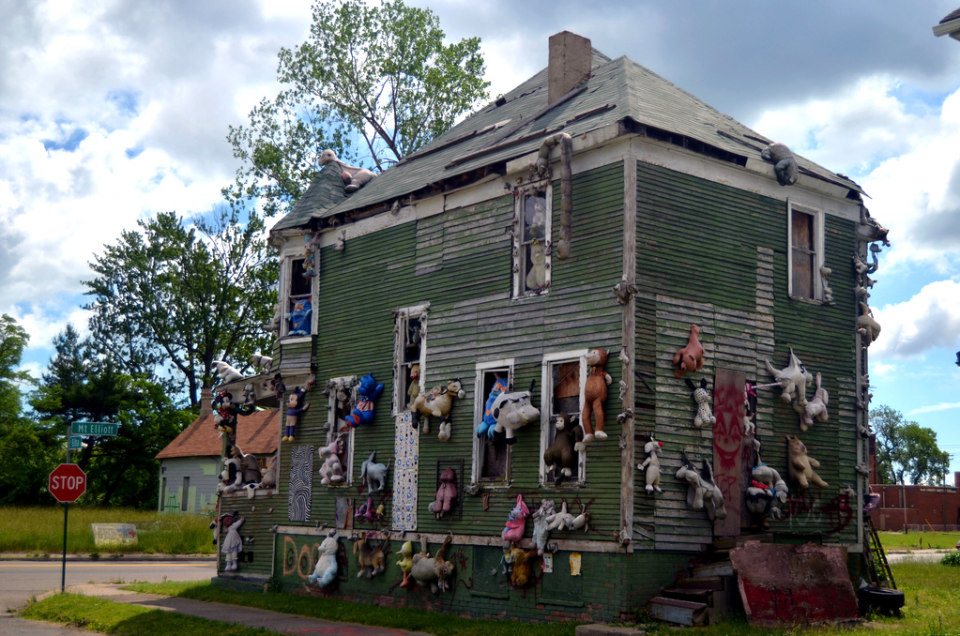 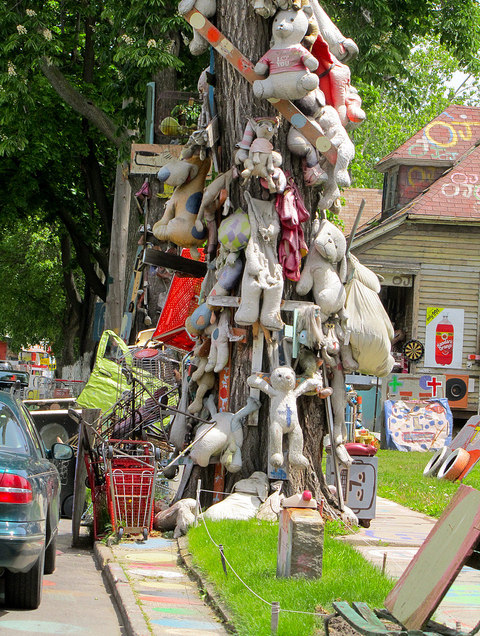 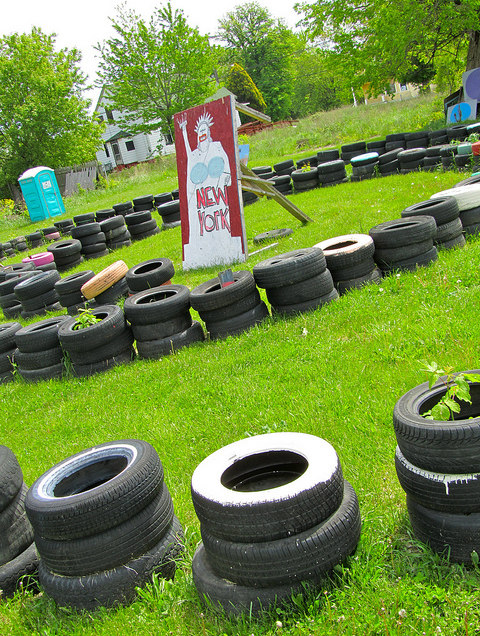 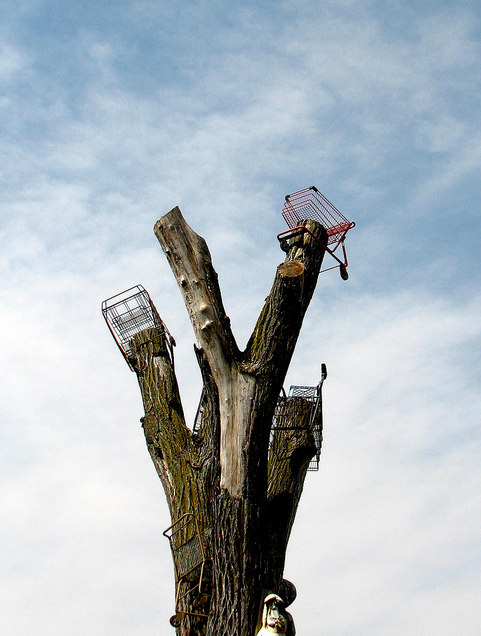 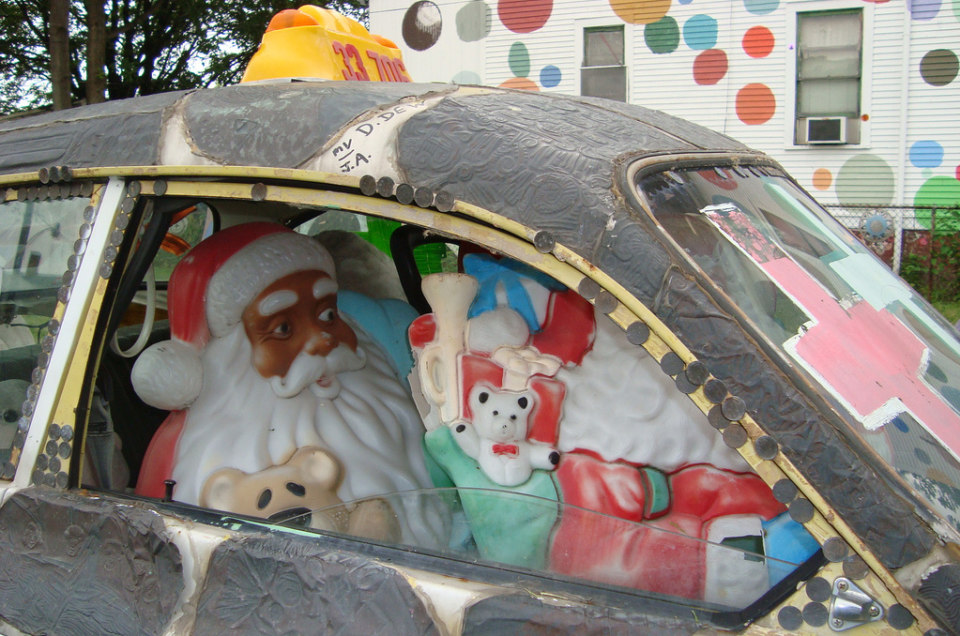 The Heidelberg Project, Detroit. Photo via A Healthier Michigan. 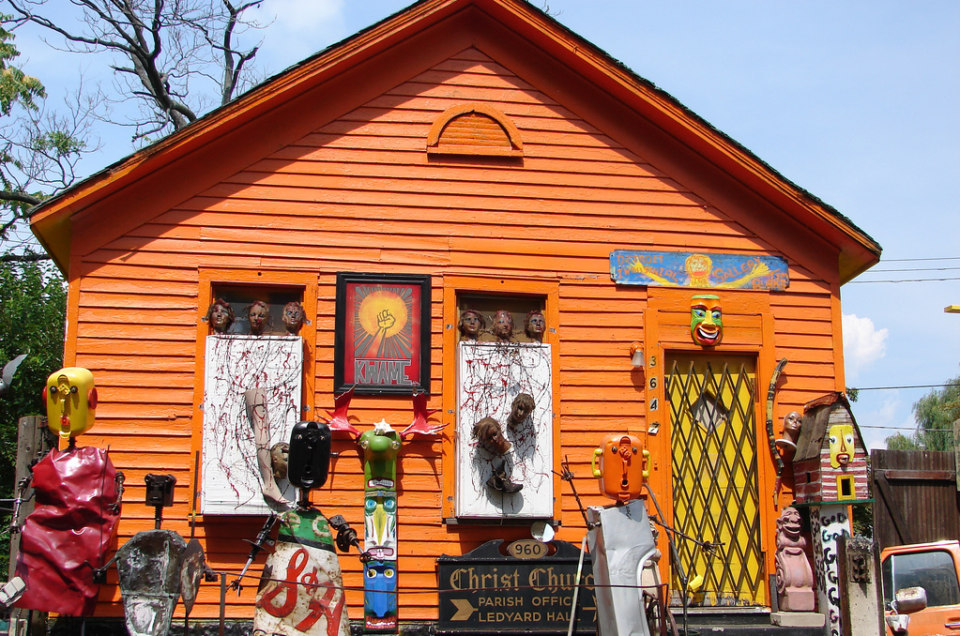 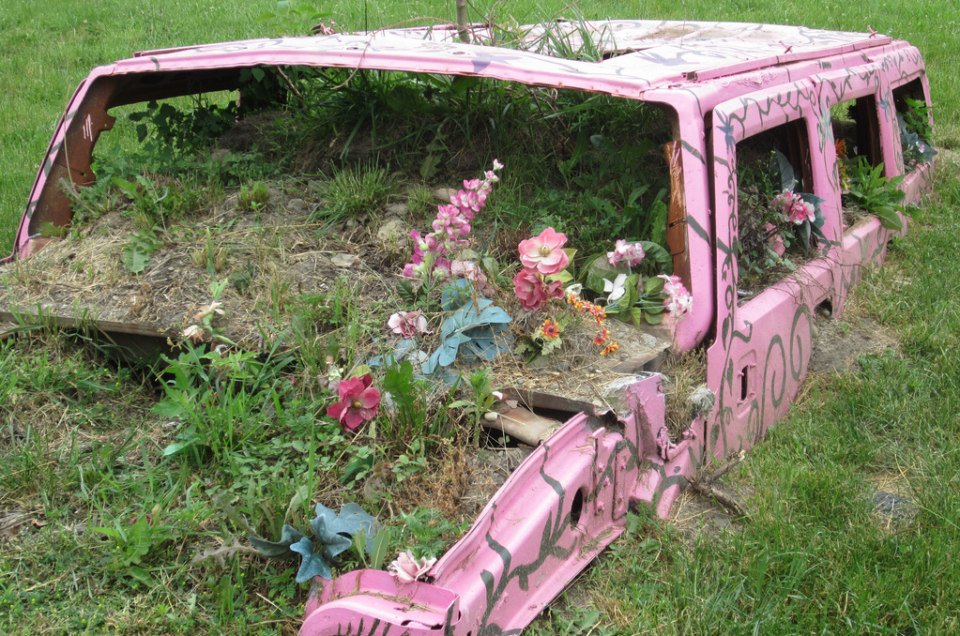 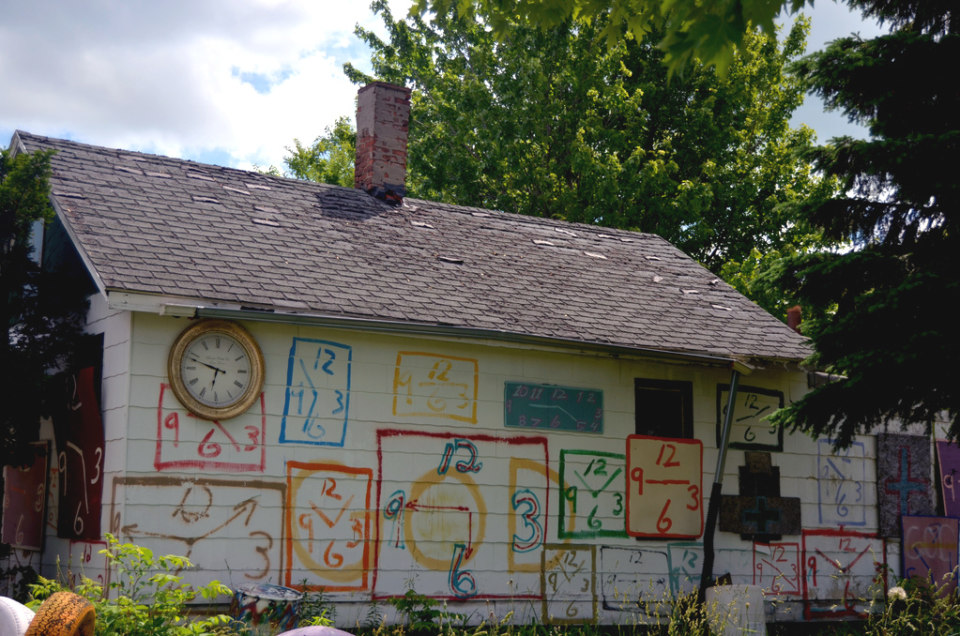 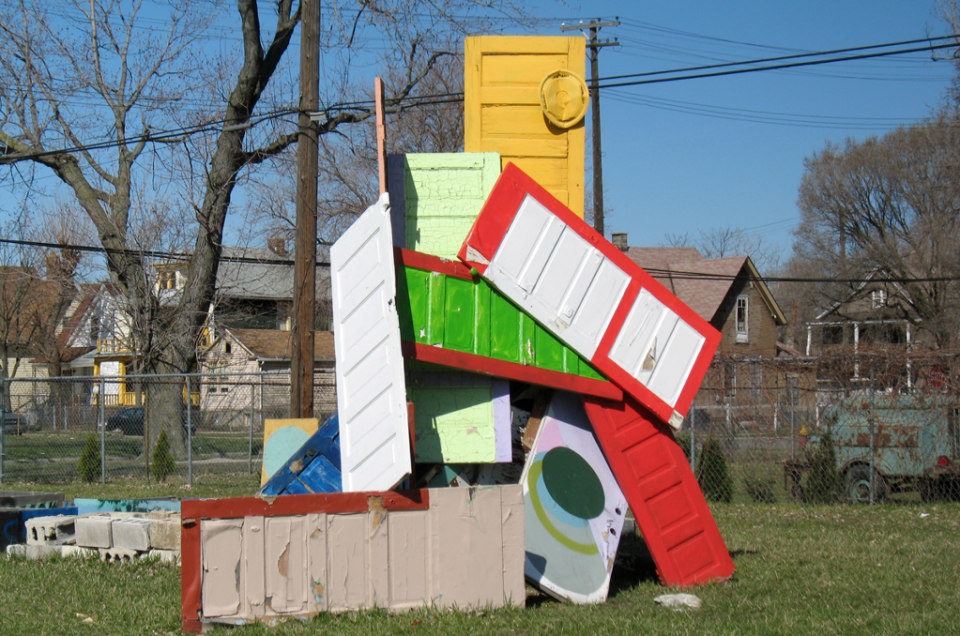 One man’s trash is another man’s two-block open-air art installment. Located in Detroit’s East Side, The Heidelberg Project has famously transformed a pair of abandoned streets in the center of a decaying urban community into a bizarre world of color and creativity, using the houses, trees and even the streets themselves as its canvas.

Like a twisted cartoon world come to life, The Heidelberg Project incorporates found objects of all kinds, from the corpse-like bodies of old cars to forsaken stuffed animals (and a whole lot of them), into its energetic environment. Spurred into existence by artist Tyree Guyton, who grew up on Heidelberg Street and was dismayed to find it in a state of drug-addled and poverty-ridden disarray upon his return 27 years ago, the project began then, with the help of his grandfather and neighborhood children, as an effort to enrich and inspire the community. It has since grown into a powerful movement, inciting discussion and debate, furnishing jobs and educational opportunities, and providing a haven of inspiration and creativity amidst an atmosphere of desecration.

Walking down Heidelberg Street, you can almost imagine you are strolling within the dreamscape of Guyton’s subconscious, met with bright colors, snippets of language and vaguely symbolic constructions, the precise meaning of which remains perhaps just beyond reach, everywhere you look. Rather than singing birds, you’ll find knotted pairs of shoes and shopping carts nesting in the trees, some of which are crudely truncated at the limbs. Bicycles and vehicles remain perpetually frozen in place, partially buried beneath the lawn or rendered immobile by an excessive number of plush passengers. Rather than elderly community members leisurely perusing the newspaper, you’ll find a series of dial-toneless telephones set on a park bench, and instead of a warm casserole, a dozen pairs of yellow shoes baking in the oven (which is out in the yard).

The themed houses are a highlight, including the polka-dot-painted “People’s House” (AKA “Dotty Wotty”), the “House of Soul” which features enough vinyl records secured to the siding to simultaneously fascinate and horrify any vinylphile, and the “Party Animal” house, which is loaded with dingy, water-logged plushies seemingly long forgotten by their former owners. The oddly adorned homes effectively serve as massive sculptures in this larger-than-life outdoor, open-air display case.

But don’t let the polka-dotted streets and stuffed animals fool you; there is plenty of social commentary and less-than-lighthearted subject matter within the installment. Critiques and commentary on government, religion, violence, substance abuse and more can be found painted on televisions and windshields that speckle the street like lawn ornaments, and more than a few severed dolls’ heads and eerily animated gloves thrust at odd angles out of the earth.

Whether you find it disturbing or delightful, The Heidelberg Project is definitely a must-see site on any visit to Detroit.