Meeting the Gods at a Brazilian Candomblé Ceremony 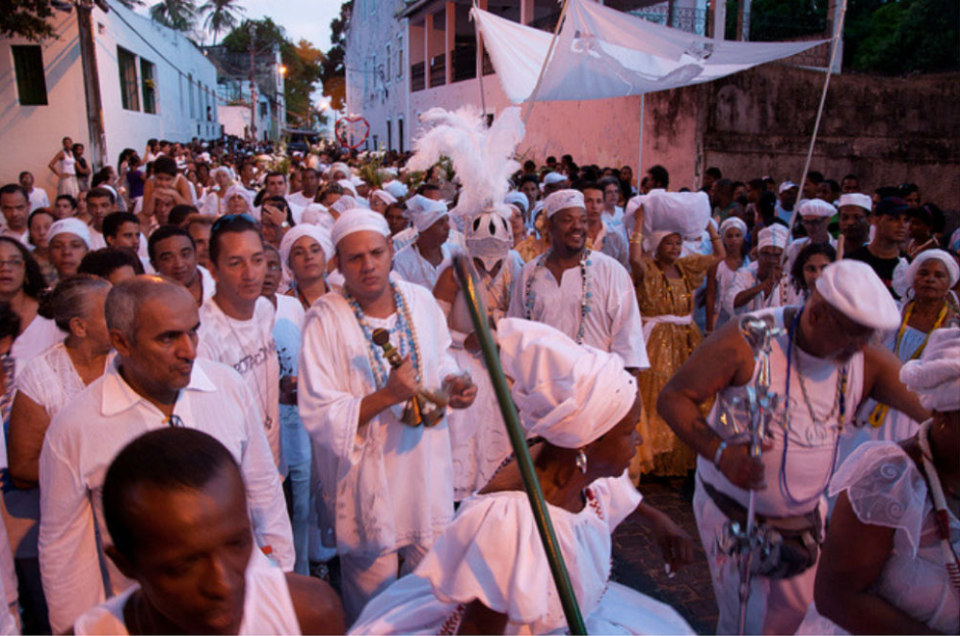 “Will there be any animal sacrifice?” I ask Nelson. Nelson is an initiate who, for a small price, will take me to a candomblé ceremony, a Brazilian version of Haitian voodoo or Cuban santería. All three are West African religions syncretised with Catholic beliefs. Christian saints have long become confused with African orixás (gods) in Salvador, capital of the state of Bahia. It is a small step from the worship of a Gulf of Guinea fetish idol to the veneration ofa statue of Virgin Mary.

In order to placate the gods, dark colours are forbidden. I’m wearing a white T-shirt with light khaki trousers and I’m wondering whether I would be splattered in blood. “If I’m going to get stains on me, I’ll wear a cheap vest instead. This is my only good clean shirt.”

“No, this is OK”, replies Nelson. “You won’t get any blood stains”.

“Will there be any animal sacrifice ?” I repeat.

Nelson nods in the negative. There are sacrifices in candomblé, but these are performed in the inner sanctum of the temple, the terreiro, not to be witnessed by non-believers. Nor do they conform to the lurid Hollywood image of voodoo: they are nothing more than the ceremonial slaying of animals for consumption by the faithful after the ceremony. That’s why every terreiro in Salvador is effectively an organic farm with animals that will eventually be consumed during a god’s feast day.

Today is the day of Ogum, god of war, a candomblé copy of our more familiar Mars. His animal is a black rooster so the food they will serve later is a more spicy version of French coq au vin with black beans and rice. If voodoo is supposed to be frightening, it is failing miserably with me today.

The terreiro is rectangular and the seats are arranged like a U – men on the right, women on the left. Leaves are strewn on the floor to make the gods of the African forest more at home. In front of us, the musicians, the ogãs – all male – start to assemble. Their instruments are just a trio of drums, consecrated by blood the night before. The smallest is the lé, the drum that leads; the second, bigger, is the rumpi, used for counterpoint; and the biggest one is the rum, providing the bass and the beat which becomes more frantic as the chanting becomes louder. The only exception is a type of cowbell that occasionally pierces our ears. This is certainly a sound even gods cannot resist.

In the interior of the U, the dancers – all female – dressed in simple white garments, start gyrating as the drums echo harder and harder invoking the spirits and summoning the gods. The dancers’ eyes are closed and their arms held horizontal, as their owners enter a trance aided by the monotonous pulse of the drums and the congregation’s Yoruba hymns.

It takes a good couple of hours of this twirling and whirling for the youngest of the girls – a mere twelve years old, I find out later – to squat in front of us, twist her mouth as if to spit a large stone and growl like a jaguar. I jump with fright, but the crowds are ululating with joy. There, the first possession: the gods are manifesting themselves one more time.

And they make themselves even clearer. From the inner sanctum entrance there comes a procession. The man dressed as Ogum has a pale blue shirt and a sword. The devil Exú is dressed in red and black holding a trident. Oxalá, the King of Gods, is all in white, like the initiates around me. Behind them follow the laymen, new initiates to be blessed dressed in their best Sunday suits – and is this a wedding couple?

The gods start moving towards the audience, and fold their garments begging for money. Despite their eyes being closed, the dancers and the gods eventually crowd up in front of me, the only gringo in the audience – now, why am I not surprised? I throw them some money to go away, but I run out of change quickly before Oxalá arrives. He will not leave and I will not part with my higher denomination notes in a standoff that lasts a good five minutes.

Then I feel something hit me and look down. One bean has landed on my white T-shirt – my only good clean shirt – from a boy’s plate next to me. Our eyes lock and his gaze is apologetic. I smile, not letting my annoyance show. Because deep down, I know.

This was the wrath of Oxalá who has taken his revenge.