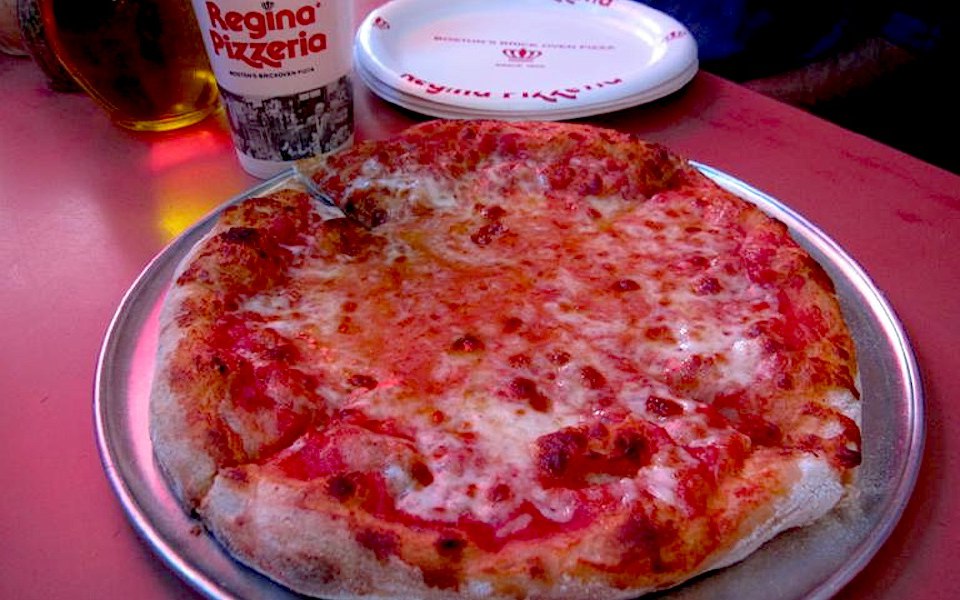 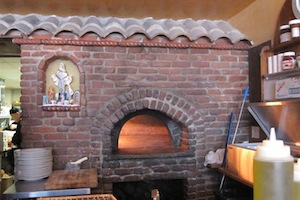 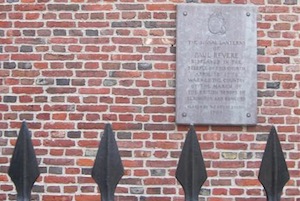 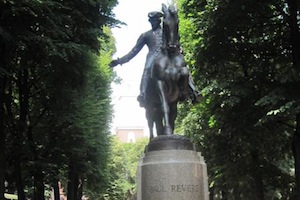 When my daughter is old enough to tour Boston’s historic sites, in 2022 or some point thereafter, we’ll try the Freedom Trail. For now, we stick with experiences she can relate to. And since pizza is one of the five things she eats, I knew she would do well on a Boston Pizza Tour through the city’s North End neighborhood. A guided walking tour offered just the right combination of history and pizza.

Within the North End alone, there are 47 eateries serving pizza. We stopped at three — Pizzeria Regina, Antico Forno, and Ernesto’s — and sampled a cheese slice at each. Our guide Martin pointed out the differences which made each unique. Pizzeria Regina, often cited as the best pizzeria in Boston, uses a gas-fired brick oven. Ernesto’s, also a contender for the top rating, produces a thick, doughy crust, served in ample-sized slices.

Antico has the only wood-fired oven in the neighborhood, and serves up a thin crusted pie with mild sauce and a reserved amount of cheese.

In between restaurant visits, we made quick stops at the Old North Church, Paul Revere’s House, and other historical spots. There were equal parts walking and sitting down to eat; a perfect kid-friendly formula. Later we realized our luck in choosing the earlier 11:00am tour. We were ahead of the lunch crowd, and were able to get seats.

All told, about 15 pizza-serving restaurants in the North End merit inclusion on the Boston Pizza Tour’s revolving roster. In addition to the three we visited, places like Benevento’s, Ducali, Galleria Umberto, Il Panino Express, and The Pushcart make the list. Each offers its own unique selling point: Galleria Umberto’s was named one of the Top 25 best pizzerias in America; Il Panino Express is a local favorite; and Benevento’s offers gluten-free crusts.

Tour stops are chosen based on a variety of factors: which pizzerias are busier at different times; the day of the week, since some are closed on Sundays or holidays; and the size of the group, since some places are too small for large numbers. When there are kids on the tours, you’ll stop at places with nice restrooms. When there are no kids, you’ll stop at places serving adult beverages!

There are other companies in Boston offering similar tours, but Boston Pizza Tours was the only one we found which welcomed young children. And since the restaurants featured on the tours vary, we could, in theory, return next summer and discover an even better slice.

Our tour lasted about two hours; exactly right for our kids. We thought they would be full after eating three slices, but all the walking had the opposite effect. They wanted dessert. A quick stop for some cool gelato under the afternoon sun was the perfect finish.

New tour themes are being launched in 2013, including a Pub & Pizza happy hour tour of Blackstone Block, Boston’s oldest commercial district dating back to the 1630’s. In addition to three pizza places, two historic taverns are included: the 1795 Bell in Hand, which claims to be the oldest tavern in America; and the Green Dragon, also known as the Headquarters of the Revolution. A World Pizza Tour will also be offered in Boston’s trendy South End, with stops at restaurants featuring pizza with Asian, Mexican, Greek, Middle Eastern, and other international influences.