Rollin’ down the river (on a reconverted rice barge) 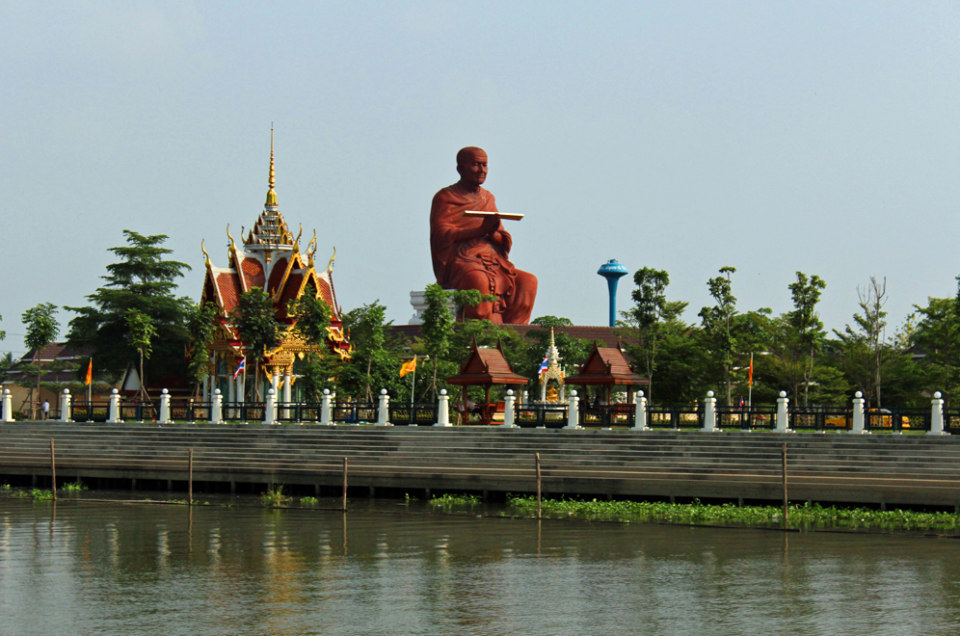 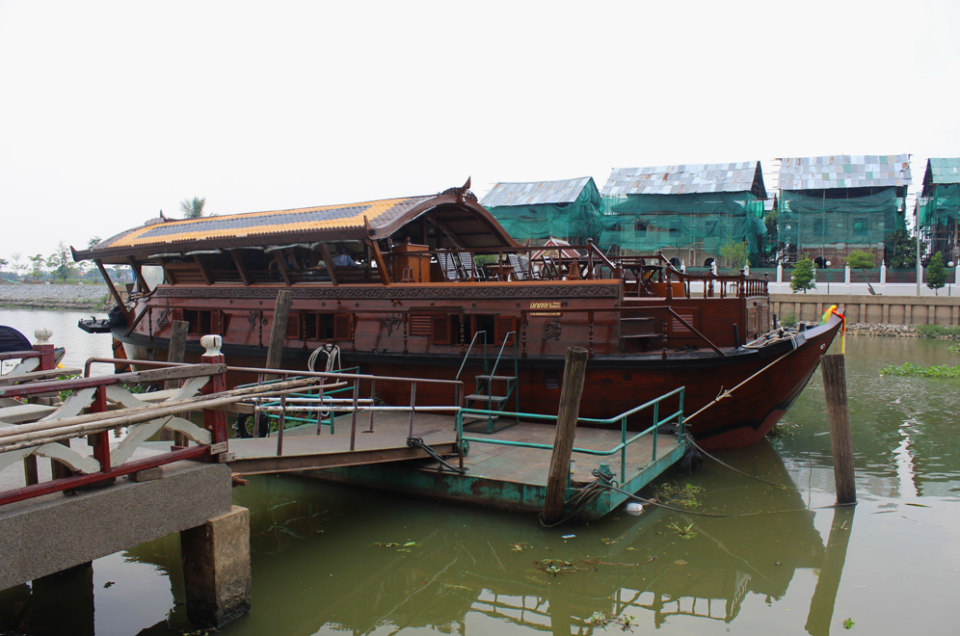 The barge in its full glory, photo by John Geary 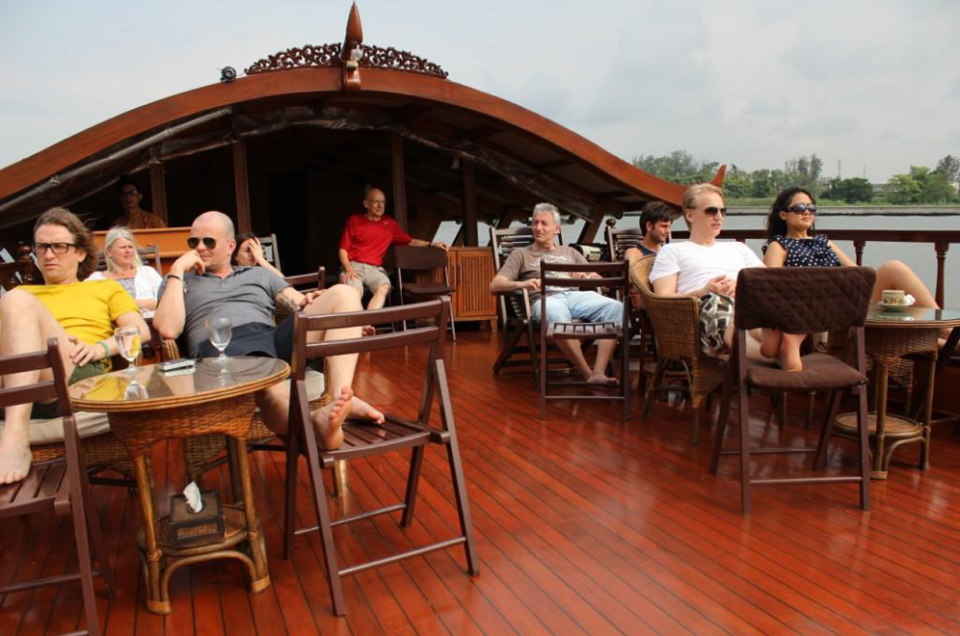 Guests relaxing on the barge with a drink, photo by John Geary 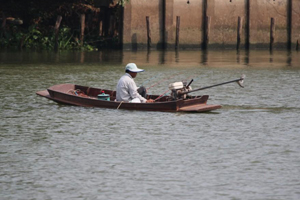 A fisherman on the river, by John Geary 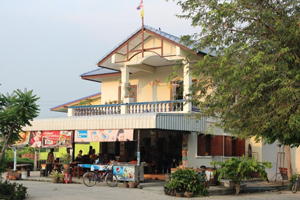 The store where beer was bought, photo by John Geary 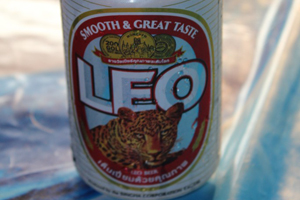 The beer in question, photo by John Geary

“Beer?” I questioned, pointing at the cooler full of chilled cans of Leo’s Lager.

The lady, who obviously spoke no English, pulled out a cold beer and indicated how many Baht it cost. That part was easy. But now I had to find out if it was okay to drink it right there. Tricky, considering I spoke no Thai.

“There” in this case, was what can best be described as some kind of confectionary-convenience store crossover in a tiny village centered around Wat Kai Tia, a temple along Thailand’s Chao Phraya River.

This facility was not a bar or café, or any kind of drinking/eating facility, not with all kinds of fresh fruit, vegetables, sweets, soft drinks and other food items sitting on shelves. So I was in a bit of a quandary. I was thirsty and hot, craving this nice cold beer I’d just bought, but unsure if I had a place to drink it.

I could have spent 20 minutes walking back to the river, but that seemed pretty pointless – I could have just stayed on board.

By “on board,” I mean aboard the Mekhala (Thai for “beautiful engine), the boat that I’d spent the afternoon floating downriver on. It is a converted rice barge – no, not a hauler of “converted rice” but rather one that used to haul rice – converted into a stylish floating hotel made of teak. Thai River Cruises ferries tourists up and down the Chao Phraya, a.k.a., the “River of Kings” in these boats on overnight cruises from Ayutthaya to Bangkok.

Constructed from huge teak planks and more than 100 years old, it now boasts a sundeck, fully-stocked bar, books for passengers’ reading pleasure and staterooms that include air-conditioning and private bathrooms.

We left port just after lunch and once underway, saw an odd mix of the old and new as we floated downriver. Buddhist temples dominated the riverbanks. On the river itself, we slid by small one-person fishing skiffs and huge barges of rice, ore and other materials being hauled by tugboats. We also spied large rafts of water hyacinth plants floating on the river’s surface.

The crew kept us well-fuelled with beer, wine or cocktails of our choice. One offering, a “Mekhala Special,” included different tropical fruit juices, gin and something called “Thai whiskey,” which is closer in character to rum than whiskey. Regardless of its ingredients, it was deliciously cold and refreshing.

Alternately napping and snapping photos, and sipping cocktails, I whiled away the afternoon.

Eventually, the boat pulled up to the village to anchor for the night and the captain told us to spend a few hours exploring. It didn’t take much time in the small village. I was the only North American on this cruise – which included a German, an Austrian, seven Danes and a Thai lady raised in Denmark – so I was unsure if anyone spoke English, and too shy to ask. I decided to wander about on my own.

Which brings me back to my quandary: where to drink my beer.

There was a Thai man there as well, but he spoke no more English than she did. I mimed to him, indicating I wished to drink the beer there, and he sort of half-smiled, so I decided to push my luck, sat down at a plastic table that fronted the store’s entrance – it didn’t have a door, it was wide open, like a fruit stand – popped open the beer and began to sip.

At that point, another fellow arrived, and seemed to be a bit perturbed that I would sit down there to drink beer. He talked with the other man, then asked me, “Where from?”

I said, “Canada,” and that seemed to mollify him a bit. But he continued to look at me oddly.

I didn’t guzzle my beer, but I didn’t nurse it, either. Once finished, I placed my hands together in front of my chest and bowed my head slightly to the three, in what seems to be a universal gesture of greeting-farewell-gratitude in Thailand, said my thank-you’s and smiled.

I walked away and began to shoot photos of some nearby flowers. The concerned-looking man rushed over.

But he smiled, gently tugging my sleeve to show me a similar bush with bigger and more numerous blossoms on it. I smiled back, thanking him, relieved and grateful.

That night, I enjoyed a sumptuous candlelit dinner with some fine companionship (it turned out every passenger spoke English!) and some more cold beers. But none were really quite as memorable or enjoyable as the one I quaffed in the village earlier, where I once again experienced that special charm some lucky travelers encounter during their journeys, that magic known as the kindness of strangers.